#TuksRugby: Tuks and Maties to faceoff in their fifth Varsity Cup final clash

The clash of the Titans is an excellent way to describe the upcoming 2022 FNB Varsity Cup final between Tuks and Maties on Monday, 25 April in Stellenbosch.

Statistics never lie. The two teams have contested 11 of the 13 finals played since 2008. Maties have been victorious on five occasions and Tuks on four. 2015 and 2014 are the only time neither team contested the Varsity Cup final. Shimlas and Ikeys were the champions.

Maties have won 12 of the 21 Varsity Cup encounters and Tuks eight. Only once did the two teams play to a draw. Interestingly Tuks got a better track record when playing finals. They won four of the six they played, while Maties were victorious in five of the nine finals they contested.

The one thing both teams have got going for them is the tenacity to fight back. During the round-robin games, Ikeys floored Maties 44-27 in Cape Town. Tuks lost 26-15 against Shimlas in Bloemfontein. Both teams turned the tables in their semifinal encounters against the same opposition.

After the Shimlas lost, Tuks were with their backs against the wall. But there is a good reason why one of the favourite sayings in sport is - "it is not how you fall, but how you get up again."

Tuks ''did get up". On Monday in Bloemfontein, they assured their place in the final with clinical and precise rugby against Shimlas. It was a textbook performance. After seven minutes, Tuks had 8-0 lead. But then seemed as if they had lost the plot. Shimlas scored three tries to take a 21-11 lead.

The turning point was when Tuks started to limit making mistakes at crucial times. It began with Bernard van der Linde (scrumhalf) scoring in the 35th minute. From then on, the Tuks team was like "slow poison", forcing the Shimlas to make mistakes. It led to Tuks winning 29-21.

"I am so proud of my team. They showed real character when it mattered," said an elated Nico Luus (Tuks head coach).

Luus credits Tuks's victory to the player's self-belief and confidence when not many would have backed them to win.

Maties thoroughly thrashed Ikeys in their semifinal encounter, winning 58-19, proving they are a team for the big moments.

Only the brave would venture a prediction as to who will win on Monday in Stellenbosch. Tuks versus Maties bring out the best in every player. For 80 minutes, it is all about the honour of the team and the university. It will never change.

Tuks Young Guns are playing the North-West University in the 2022 FNB Young Guns on Monday. 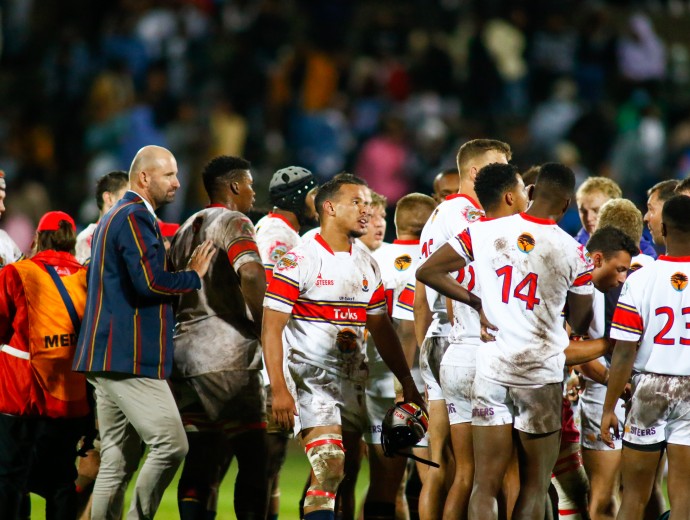