#TuksSport: A salute to trailblazing UP sportswomen

She might as well have been talking about the sportswomen of UP, many of whom have trailblazed their way around the track and in the water over the past decade. With August being Women’s Month, it is an opportune time to honour just a few of these sports stars who have made UP – and South Africa – so proud.

It’s clear that UP sportswomen don’t believe in half measures, especially when competing against the world’s best – there have been Olympic champions, world champions, record-breakers and captains. And with each success story, the quest for perfection seems to have been a central theme.

The 800-metre champion Caster Semenya will forever be remembered as one of the greats of South African sport – and it all started at UP in 2009. With the help of her coach, Michael Seme, and a TuksSport support team, Semenya was able to focus on what she loved doing. From the start, she was clear about what she wanted to achieve – to win medals. And she did. By the time she left UP, Semenya had two World Championships titles (2009 and 2011) to her name as well as an Olympic gold medal, which she won at the 2012 Games in London. She has been pushing the boundaries ever since.

Last year was a bumper year for UP swimmer Tatjana Schoenmaker. She was responsible for one of the most significant breakthroughs in South African women’s sport when she won a silver medal in the 200-metre breaststroke at the FINA World Championships in South Korea – it was the first time that a South African female swimmer had won a medal at the FINA World Championships.

The swimming champ also claimed two gold medals at the World Student Games in Napoli for the 100-metre and 200-metre breaststrokes in the same year, and then went on to take home two gold medals at the FINA Swimming World Cup in Tokyo for the same events. She also won double gold for these events at the 2018 Commonwealth Games on Australia’s Gold Coast.

Bridgitte Hartley is another sporting sensation in the water. She won a bronze medal in the kayak singles 500-metre race during the 2012 London Games, and remains the first South African and African paddler to win an Olympic medal for kayak sprint disciplines. It had taken the UP rower nearly eight years of hard work, sacrifices and disappointments to at long last earn her place on the Olympic podium.

“I can honestly say it was the best day of my life,” said Hartley. “I was happy, sad, joyful, excited and speechless. I experienced every possible emotion while I was standing on the podium watching the South African flag being hoisted next to the flag of Hungary, the top nation in sprint canoeing.”

UP rower Kirsten McCann’s double sculls teammate, Nicole van Wyk, probably summed up McCann’s grit and determination best. “Once Kirsten has set a goal, she is furiously committed to it and won’t relent until achieving it. Giving less than 100% during any training session would never be an option for her.” That is probably why McCann made South African sports history in 2017 when she won the lightweight women’s single sculls race during the World Rowing Championships in Sarasota, Florida. She is the first local female rower to do so. At the time she wrote on her Twitter page: “Showing the world that South African sportswomen can be fast, furious and fabulous.” 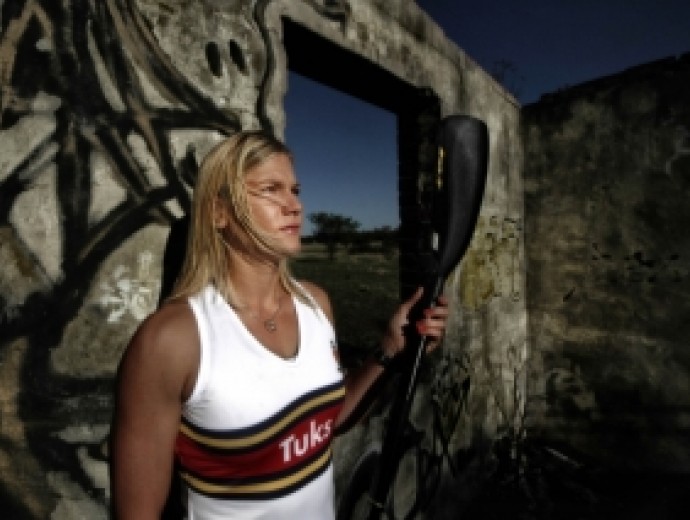