‘He gave 100%’: UP long jumper strives to immortalise training partner who passed away

Tuks long jumper Jovan van Vuuren has a good reason for wanting to go past the eight-metre barrier next month, and it is not only to do with the Tokyo Olympic Games.

While it is vital for him to prove to himself that he is not just a "one-hit wonder", it is also quite a personal quest: A good friend and former training partner, Hendrik Maartens, died by suicide two years ago. And ever since, Van Vuuren has been going for that one big jump as a tribute to a friend lost.

Last year's USSA Championships in Stellenbosch was the first time he got close to feeling that he is on track. Van Vuuren won jumping 8.10m, which ranks him as one of South Africa's ten all-time best long jumpers.

Van Vuuren said on the day it felt as if Maartens was with him, rooting for him to go big.

"Hendrik and I have been friends from when we were seven. We shared a passion for athletics. I still consider him to be one of South Africa's best sprinters. In 2017 he clocked a time of 20.40s in the 200m. I used to joke with him saying that he is Africa's fastest white sprinter. What I most admired about Hendrik is his passion and dedication. Whenever he stepped onto the track, he gave 100%.”

The Tuks athlete has no doubt that he has got an eight metre-plus jump waiting to happen. If he could have his way, he would love to do so during next month's Varsity Athletics meeting, that is if it is going to take place.

"My coach, Neil Cornelius, always emphasises the secret to a big jump is to be focused on controlling the controllable. When you line up, it has only got to be you, the two lines and the plank - nothing else should matter.

"I must admit there is a thrill to long jumping. The moment you take off, the adrenaline kicks in. For those few milliseconds, it feels like you’re flying. I don't think people realise how far eight metres is. Roughly, it means jumping more than two storeys, only horizontally.

"Getting to hit the sand is not always a thrill. It can be quite hard. There are times it feels like your breath gets knocked out of you, but the 'fun' never ceases. I guess, in a way, you can say we as athletes get addicted to what we do."

Van Vuuren is realistic about what it is going to take to qualify for the Tokyo Olympic Games.

"It is going to be tough. Theoretically, it means I’ve got to beat three of the World's best long jumpers - Luvo Manyonga, Ruswahl Samaai and Zarck Visser.  I know I can do it. I’ve only got to believe."

He credits coach Cornelius, who helped Manyonga win a World Championship and silver medal at the 2016 Olympic Games, with his confidence.

"Neil has got a way to calm me and make me believe nothing is impossible."

Please call the SA Depression and Anxiety Group on 0800 567 567 should you be in distress and in need of psychological support. UP students and staff can also contact UP Careline on 0800 747 747. 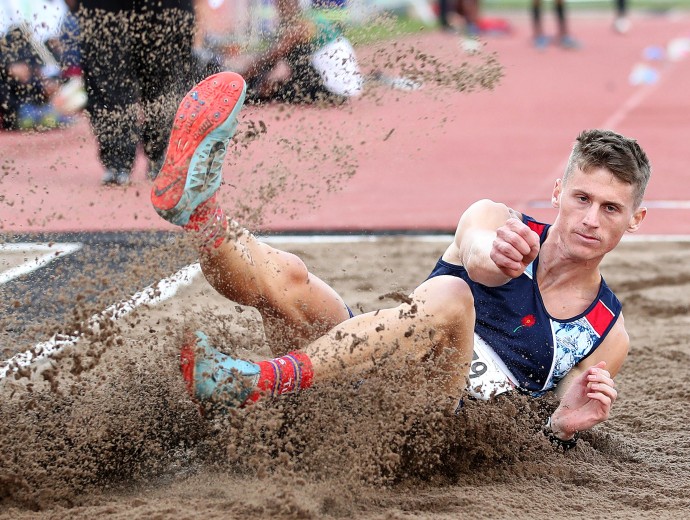