Robert Moropa, a diehard Kaizer Chiefs Football Club (KCFC) fan and former director of the University Pretoria’s (UP) Department of Library Services, got the shock of his life when representatives of his favourite football club surprised him at his UP farewell function.

Besides presenting him with a jersey and other memorabilia paid for by his colleagues, KCFC invited Moropa to participate in a campaign to celebrate their 50th anniversary, which included the release of a commemorative jersey.

“I have followed Kaizer Chiefs from its inception and used to listen to radio commentary on their games, as there was no TV in South Africa then,” Moropa said. “[Founder and current KCFC Chairman] Kaizer Motaung has built a huge brand and has stayed relevant with changing trends. Running a football club today is different from 50 years ago.” Kaizer Chiefs Football Club (KCFC) founder and Chairman Kaizer Motaung with lifelong KCFC fan Robert Moropa and “Libby the Librarian”, the University of Pretoria’s robotic librarian assistant, the first client-service robot known to be in use at any university library in Africa.

Moropa, who retired in December after working at UP for 20 years, has always sung the praises of this Premier Soccer League team, despite its many misfortunes. “I want to thank my colleagues at UP Library Services staff, who played a role here. I used to speak loudly about my team and never jumped ship despite the tough times they went through. My former staff members went behind my back. They could have stopped at buying me a Kaizer Chiefs jersey, but went beyond my wildest dreams.”

Moropa’s devotion to KCFC resulted in playful banter between him and his staff. According to Lazarus Gallant Matizirofa, Deputy Director of UP’s Library Services, “I was approached by colleagues with suggestions for Robert’s farewell. I noted that the lighter side of him was talking about soccer, and always being happy about his soccer team… This often happened in the tea room, every Monday or after mid-week PSL soccer games. Being a new staff member, supporters of different teams wanted to recruit me. But I kept them wondering, and never revealed my team of choice.”

Matizirofa proposed a Kaizer Chiefs soccer jersey as a farewell gift, which staff purchased. The intention was to get it autographed by the team’s players. “Everyone thought this was impossible, but I promised it would be easy. I then sent a letter to the club. A few days later we got a call telling us KCFC was going to honour Robert as one of their devoted supporters.”

At his farewell, Moropa’s speech was interrupted by club representatives Emmanuel Khumalo and Tracy Williams. According to Matizirofa, they “invaded his speech singing a Kaizer Chiefs stadium song, and he was shell-shocked and just stood there, eyes wide open, when he noticed the KCFC flags and shopping bags.” The Department of Library Services paid for a jersey shirt which was printed with Moropa’s name and the number 20, while KCFC added some special treats.

Interviewed at Kaizer Chiefs Village in Naturena, Johannesburg, Williams said, “Kaizer Chiefs is a family, and we treat our supporters with the love and respect reserved for those you love the most.  That’s we why we make a point of responding to every email in a warm and friendly manner. We thought we would touch the life of this diehard supporter who supports us whether we win, lose or draw.” The club then went a step further, affording Moropa an opportunity to participate in a campaign commemorating its 50th anniversary. He was invited to KCFC headquarters, which houses the club’s world-classes training facilities. He then got to participate in the club’s “Tell us your story” campaign, which entailed a photo and video shoot alongside Libby, UP’s robotic librarian assistant and the first client-service robot known to be in use at any university library in Africa.

Moropa could hardly believe his luck when he got to meet Kaizer Motaung at the photo shoot. “Wearing this jersey represents 50 years of history,” Moropa said. “I’m elated to be part of the first few to wear this jersey. This is a gift I will never forget. Being part of this campaign is amazing. I’ve been following Kaizer Chiefs right from its inception. It really means a lot to me. I wish my team success over the next 50 years.”

Williams said Libby the robotic library assistant was included in the campaign as she “represents the future. Fifty years have gone by, and we have to embrace the future or we will be left behind.” The club launched its anniversary celebrations earlier this month with the release of a special anniversary logo and an iconic commemorative jersey.

With an estimated more than 14 million fans behind it, the club’s golden anniversary will be a year-long celebration of events and activities that pay tribute to its loyal supporters, phenomenal players, dedicated staff, and partners that have been integral to the club’s success over the years. 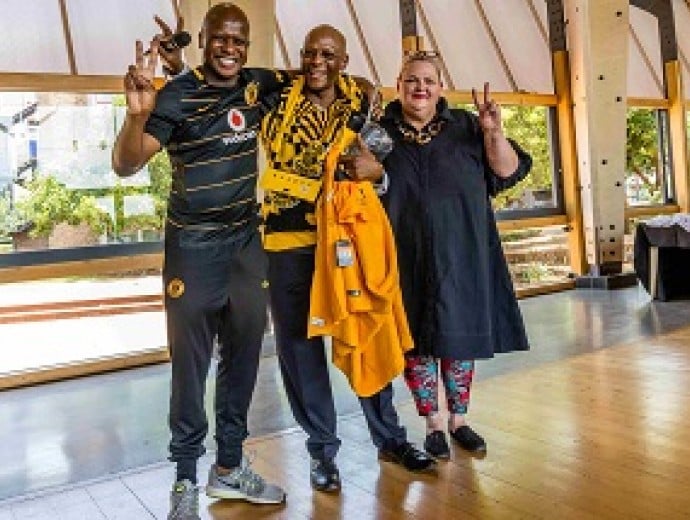 Former UP Director of Library Services Robert Moropa with Kaizer Chiefs’ Emmanuel Khumalo and Tracy Williams who surprised him by delivering a personalised Kaizer Chiefs shirt bought for him by his colleagues, along with some extra KCFC goodies.