University of Pretoria (UP) computer engineering students Cornelius and Waldi van der Linde can’t resist a problem-solving challenge – which is why they play chess.

The TuksSport chess-playing twins made their first move more than 10 years ago, and on 6 December, they hope to use their skills to help UP win the USSA Chess Tournament for a third consecutive year, this time at Rhodes University in Makhanda.

“Problem-solving means engaging in a task for which the solution is not known in advance,” says Waldi who, along with his twin brother, has always had an affinity for maths. “To find a solution, you must draw on your knowledge. Through this process, you often develop new mathematical understandings. It is pretty much what playing chess also entails.” TuksSport chess-playing twins Cornelius and Waldi van der Linde have been at it for more than 10 years.

Cornelius recalls their excitement when they first started playing.

“We used to get up quite early on weekdays so we could play at least one game of chess before going to school. Our biggest challenge was to try to beat the computer. These battles got so heated that our dad needed to buy extra fans to cool the computer down!”

Mfundo Masiya, another TuksSport chess player who will be representing UP at the tournament in Makhanda, had a very different introduction to the game.

“I was coming home from school, and saw my uncle and a friend playing a game,” he recalls. “A crowd had gathered around to watch, and everybody seemed to be very serious. I was fascinated, especially seeing those funny-looking pieces being moved around on a chequered board. Out of curiosity, I tried to touch one of the pieces. It was a big mistake. My uncle got upset and told me to get lost.”

Yet rather than be discouraged, Mfundo was motivated. “A few weeks later at school, I saw the same game being played. Naturally, I wanted to play – I have not stopped since then.” In fact, he finished fourth at the African under-23 championship at the end of 2018.

Waldi says the challenge to always be one move ahead of an opponent is what got him hooked.

“You have to pre-empt what your opponent’s next move is going to be. You really have to think before you do, because once you have executed a move, there is no changing it. You ‘live or die’ by the decisions you make.”

Mfundo agrees. “Chess is not like rugby, where you can blame the referee afterwards. If I lose, I can blame only myself.” Mfundo Masiya describes himself as a tactical player.

For him, it is the multi-faceted aspects of chess that keep him interested.

“You have to have the same mind-set as a mathematician,” Mfundo says. “Playing chess is also definitely a way to improve your memory. But what I like most is that I get to be creative. Sometimes I get to do things that no one else has done. Playing chess is a way to express myself.”

Cornelius maintains that being competitive entails a bit of research beforehand – the more knowledgeable you are, the more chance you have of a psychological advantage.

“You can rattle some players when you make a particular move, but you can do that only if you have done your homework. That entails studying up on the plays that made the masters of our sport unbeatable.”

“You have to be able to take control of your emotions and nerves at all times,” adds Mfundo, who describes himself as a tactical player.

“There are high scores and not much defending. Sometimes it seems as if there is chaos on the board. That is how I like to play. I guess I am kind of a maverick. I hope to surprise my opponent all the time, even scare them. I am also scared at that moment, but I think I can negotiate the situation better."

It is not unusual for a chess match to last more than five hours. So how fit do you need to be to stay focused?

“There is definitely such a thing as being chess fit,” says Cornelius. “A ‘couch potato’ would be competitive for about 90% of a game. But it is the end game that matters; that is when only a few pieces are left on the board, and your king becomes a strong piece. Every move matters – one mistake and it can be game over.”

“Physically it certainly takes its toll,” adds Mfundo. “During one tournament I played a five-hour game in the morning, then another four hours in the evening. If you are not chess fit, you are guaranteed to lose focus.” 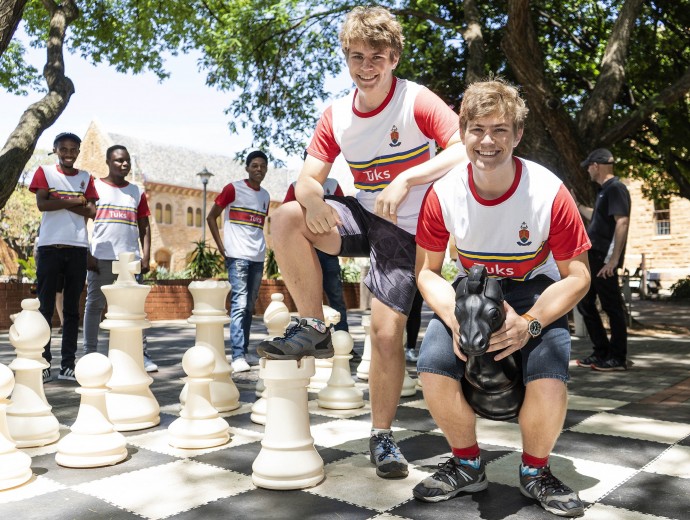