For rhinos that survive a poaching attack, the fight to stay alive is not over. In order to treat the animal, it needs to be immobilised via darting. Anti-poaching measures, such as dehorning and collaring, also require a rhino to be immobilised. Immobilisation can be a risky exercise, with rhinos dying during these procedures in the past.

But the findings of a recent study on the effects of butorphanol, an opioid, on immobilised rhinos may be a game-changer in preventing the loss of these endangered animals.

The research was conducted by Professor Leith Meyer, Director of the Centre for Veterinary Wildlife Studies at the University of Pretoria (UP) and an Associate Professor in Veterinary Pharmacology, in collaboration with SANParks and Wits University in an effort to gain new insights into the role of certain immobilising drugs.

In fact, for this breakthrough research, the academics received the 2018 Elsevier Prize for the best article published in the journal Veterinary Anaesthesia and Analgesia.

Prof Meyer says it has taken some time to fully understand the exact physiological effects of the drugs used to immobilise rhinos. “Immobilisation effects are not easy to measure in rhino, so we have to develop novel ways of measuring these effects, such as adapting a human exercise physiology system to measure the ventilation and metabolism of immobilised rhinos.”

Despite the limitations, Prof Meyer has gained great insight into the physiology of an immobilised rhino. Typically, rhinos are immobilised using etorphine, also known as M99, an opioid that is about 4 000 times more potent than morphine. Etorphine is usually administered in combination with a tranquiliser, which reduces induction time and opioid-associated hypertension.

Most deaths of immobilised rhinos have, however, occurred as a result of hypoxia – abnormally low concentrations of oxygen in the blood – which is an effect of drugs such as etorphine.

Butorphanol, also an opioid, has been administered by vets in the past partly because it reverses etorphine’s effects without reversing the immobilising effect. “This partial reversal was thought to improve the rhino’s breathing during immobilisation,” says Prof Meyer.

Before the study, it was thought that the deficiency of oxygen in the blood of immobilised rhinos was as a result of the drugs depressing breathing. However, Prof Meyer and his collaborators found that etorphine-induced hypoxia developed mainly as a result of the rhino’s metabolism increasing, which is set in motion by tremors.

“The increase in metabolism is what primarily causes the hypoxia, as it burns up all the animal’s oxygen reserves,” says Prof Meyer. “Butorphanol had been used by vets before as it appeared to make the animals breathe better, but the research we did showed that this wasn’t necessarily the case – butorphanol’s main beneficial effects are reducing tremors and metabolism.”

Their findings prove incredibly important to rhino conservation: not only does the study confirm that butorphanol is an important drug to use during immobilisation, but also that its beneficial effects are not what they were previously thought to be. It reduces tremors, thereby reducing metabolism to help improve the animal’s oxygen levels.

“This is a massive benefit to immobilised rhino as it reduces the risk of anaesthetic-related deaths,” says Prof Meyer. “The other important aspect of this study is that any future drug development needs to focus on treating the hypermetabolism caused by etorphine, not just its respiratory depressive effects.”

Not only is this research of value to academia, but it is imperative for the wildlife veterinary community working on rhinos in the field. “This award is a reflection of the high quality of scientific conservation research and the importance of collaborations across multiple fields of science and institutions,” said a SANParks representative. “The importance of all this work and what we have learnt can now be applied to find drugs that can make rhino immobilisation even safer.”

Prof Meyer hopes that one day we will get to the point where rhino anaesthesia becomes so safe that no animal will die during immobilisations. “This is a pretty important goal, especially as our rhino populations unfortunately continue to decrease.” 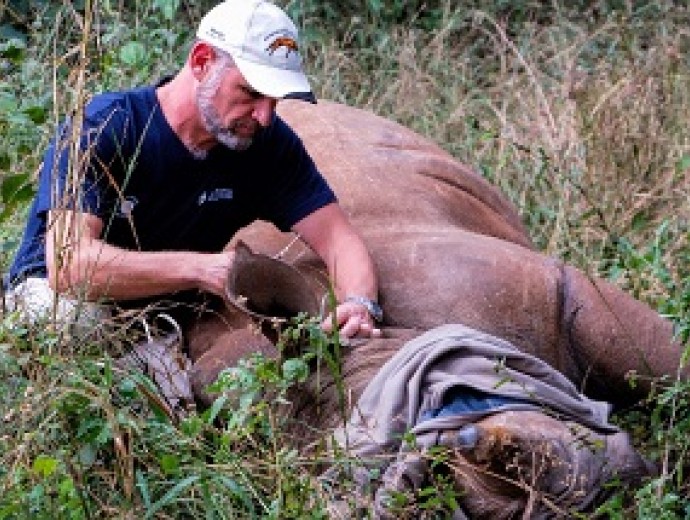 Professor Leith Meyer says it has taken some time to fully understand the exact physiological effects of the drugs used to immobilise rhinos.