A study has concluded that the earliest ancestors of anatomically modern humans (Homo sapiens sapiens) emerged in a southern African “homeland” and thrived there for 70 000 years, before some migrated due to climate shifts.

Two University of Pretoria (UP) researchers (Professor Vanessa Hayes and Professor Riana Bornman) were part of a team of international scientists who, through the use of DNA, found that the “homeland”, south of the Greater Zambezi River Basin region, included the entire expanse of northern Botswana, into Namibia to the west, and Zimbabwe to the east.

The breakthrough findings were published on Monday, 28 October 2019, in the prestigious British multidisciplinary scientific journal Nature. The authors propose that changes in Africa’s climate triggered the first human explorations, which initiated the development of humans’ genetic, ethnic and cultural diversity.

This study provides a window into the first 100 000 years of modern humans’ history. Professor Riana Bornman conducting research on prostate cancer. The focus of the research is to capture the extent of genetic diversity across South Africa so all South Africans can be included in genomic medicine using their DNA code to manage and treat disease.

Prof Hayes, from the Garvan Institute of Medical Research and University of Sydney, and an Extraordinary Professor at UP, said, “Data suggests that the Greater Zambezi River Basin region, particularly the southwest Kalahari, played a significant role in shaping anatomical modern human emergence and prehistory.”

She said, “It has been clear for some time that anatomically modern humans appeared in Africa roughly 200 000 years ago. What has been long debated is the exact location of this emergence and subsequent dispersal of our earliest ancestors.”

Furthermore, “Mitochondrial DNA acts like a time capsule of our ancestral mothers, accumulating changes slowly over generations. Comparing the complete DNA code, or mitogenome, from different individuals provides information on how closely they are related.” Prof Hayes and her colleagues collected blood samples from 198 Namibians and South Africans who carried mitogenomes that were till now poorly represented in the human maternal tree (known as a phylogenetic tree) of all modern humans. The aim was to establish a comprehensive catalogue of modern humans’ earliest mitogenomes from the so-called ‘L0’ lineage.

The L0 lineage is predominantly represented within populations broadly classified as KhoeSan, described as southern Africans speaking a click language, who may or may not practice a foraging lifestyle. Much of the available mitogenome data, until now, had been sourced from studies focused in Botswana. By including Namibians and South Africans from all ethnicities and language groups, KhoeSan and non-KhoeSan, the study authors identified new L0 sub-lineages. “As a South African, it is exciting to know that many South Africans, irrespective of how they ethnically identify, may be carrying a mitogenome from one of modern human’s oldest known ancestors,” Prof Hayes said.

According to Prof Riana Bornman, study author and Senior Research Professor at UP’s School of Health Systems and Public Health, “The focus of our research was and is to capture the extent of genetic diversity across South Africa, so all South Africans can be included in the new era of genomic medicine – using one’s DNA code to manage and treat disease. Our disease focus being prostate cancer, a devastating disease impacting many South African men.

“Genetic diversity is the footprint of your past, and your past predicts your future. As southern Africa has played a critical role in the evolution of all modern humans, it is essential that they are included in the genomic era, which today is still predominated by European countries,” she explained. However, through the combination of genetics, geology and climatic physics, these researchers got more than they bargained for. Professor Vanessa Hayes discussing the significance of the region with Headman ǀkun ǀkunta from an extended Juǀ’hoansi family. Living within the homeland region of the greater Kalahari of Namibia, Prof Hayes has been visiting ǀkun and his extended family for over a decade. ǀkun was proudly one of the many participants who donated his mitogenome to this study. Photo: Garvan Institute of Medical Research, University of Sydney (Chris Bennett).

Prof Bornman said, “Our work would not have been possible without the generous contributions of local communities and study participants in Namibia and South Africa, which allowed us to uncover rare and new L0 sub-branches.”

First author Dr Eva Chan, from the Garvan Institute of Medical Research, who led the phylogenetic analyses, explained, “We merged 198 new, rare mitogenomes to the current database of modern human’s earliest known population, the L0 lineage. This allowed us to refine the evolutionary tree of our earliest ancestral branches better than ever before.”

The study’s finding that the first Homo sapiens sapiens maternal lineage emerged in a “homeland” in southern Africa was made by combining the L0 lineage timeline with the linguistic, cultural and geographic distributions of different sub-lineages.

Geologist Dr Andy Moore of Rhodes University investigated existing geological, archeological and fossil evidence to reveal that the homeland region once held Africa’s largest ever lake system, Lake Makgadikgadi. “Prior to modern human emergence, the lake had begun to drain due to shifts in underlying tectonic plates. This would have created a vast wetland, which is known to be one of the most productive ecosystems for sustaining life.”

The scientists’ new evolutionary timelines suggest that the ancient wetland ecosystem provided a stable ecological environment for modern humans’ first ancestors to thrive for 70 000 years. “Then, from 130 000 to 110 000 years ago, we see new L0 branches appearing in our maternal tree, which is a direct consequence of a migration event. Examining the geographic distribution of these branches, the first migrants cross the Zambezi in a northwest direction and later in a southwest direction. Others stay in the homeland,” Prof Hayes said.

“It’s the southwesterly explorers that appear to flourish, experiencing steady population growth.” The authors speculate that the success of this migration was most likely a result of adaptation to living and hunting off the ocean. “We see no genetic evidence for these southerly migrants north of the Zambezi, while archaeological data along South Africa’s southerly coast, especially the Blombos caves [in the Western Cape], has provided extensive evidence that modern humans thrived off the oceans around 100 000 years ago.” Professor Vanessa Hayes discussing the significance of the region with an extended Juǀ’hoansi family who live today within the semi-desert Kalahari region of Namibia. The Nature study reveals this region was once a wetland where our modern human ancestors thrived for 70 000 years. The Juǀ’hoansi are part of those descendants who eventually adapted to the drying lands. Photo: Garvan Institute of Medical Research, University of Sydney (Chris Bennett).

To investigate what may have driven these early human migrations, Professor Axel Timmermann, Director of the IBS Center for Climate Physics at Pusan National University, analysed climate computer model simulations overlaid with geological data, to capture southern Africa’s climate history of the past 250 000 years. “Our simulations suggest that the slow wobble of the Earth’s axis changes summer solar radiation in the southern hemisphere, leading to periodic shifts in rainfall across southern Africa,” he said. “These shifts in climate would have opened green, vegetated corridors, first 130 000 years ago to the northeast, and then around 110 000 years ago to the southwest, allowing our earliest ancestors to migrate away from the homeland for the first time.”

Prof Bornman said the significance of their research finding is that “we have a better understanding of the extent of genetic diversity within our own ‘homeland’. As one of the most significant risk factors for prostate cancer is family history, and as a direct consequence of this work, we have not only linked mitochondrial diversity to prostate cancer risk, but also KhoeSan ancestry. The latter was published this year in BMC Medical Genomics, as part of our Southern African Prostate Cancer Study.”

This study brought together not only different South African universities – Pretoria, Limpopo, Rhodes and Akademia – but also international expertise. Importantly, it uniquely merged different science disciplines in a unique way to unravel the story of all southern Africans.

UP’s Dean of the Faculty of Health Sciences, Professor Tiaan de Jager, said, “The Faculty continues to exemplify and build on the University of Pretoria’s vision of being a leading research-intensive university in Africa. The results of this research are an indication that we are well on our way to understanding diseases better. We hope our researchers will continue to work together to address significant issues related to human health in South Africa and beyond.” 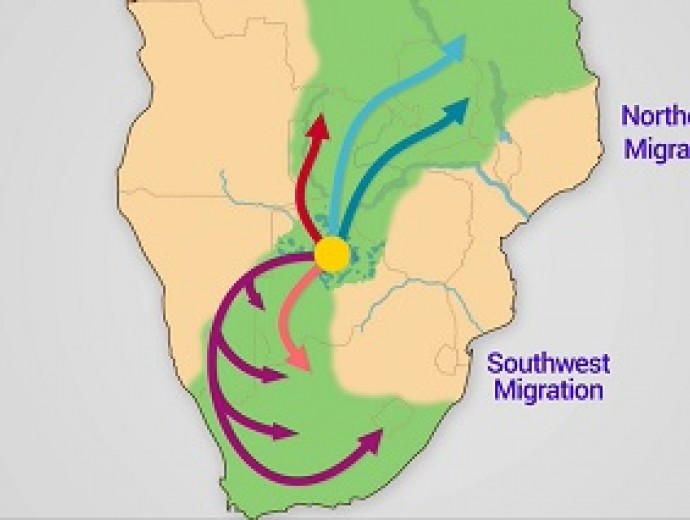 A map of the migration