An aerial survey of southern right whales off the Cape coast by the University of Pretoria (UP) has counted 200 whales in the area, the second-lowest figure since 1995.

The survey was undertaken by the Whale Unit at UP’s Mammal Research Institute between 30 September and 5 October 2019. According to the unit’s Research Manager, Dr Els Vermeulen, “This survey was flown between Nature’s Valley and Muizenberg, using an Airbus EC120B under charter from Silvercross Helicopters. All encountered whale and dolphin species were recorded, with a special focus on southern right whales.”

Dr Vermeulen explained that, “These numbers mark the second-lowest number of right whales along our shores in October since 1995, after the extreme low numbers of 2016, 55 pairs. This is a huge decrease from last year’s all-time record of 536 cow-calf pairs in the same stretch of coastline.”

At the same time, it is a strong decrease from the 131 cow-calf pairs which were counted between Hermanus and Infanta in August this year. The reason for this apparent shift in peak presence over the past years could be related to female right whales giving birth earlier and therefore leaving the South African breeding ground earlier, or that female right whales are leaving the South African breeding ground earlier possibly with a calf that is not ready to migrate. “Also, the number of adults without a calf – unaccompanied adults being males, resting females and females that should fall pregnant this year – remained extremely low, as it has been since 2009. In fact, the recording of 10 adults without a calf in October is the second lowest count in the past 40 years. In 2016 we only counted 9! This tells us that non-calving right whales are still not migrating up to the South African coast as they used to prior to 2009.”

Whether these are temporary trends or not remains to be determined. The Whale Unit is investigating this matter, with preliminary results indicating strong correlation with climate conditions in the Southern Ocean and fluctuations in food availability and therefore energy reserves. “We believe the whales are not finding enough food, due to changes in the climate conditions of the Southern Ocean, possibly related to climate change. Right whales eat krill and copepods, and with not enough food they cannot store enough energy reserves to complete the costly migrations and reproduction.” This has implications for their population recovery.

Similar trends are being recorded in South America and Australia, which led to the MRI Whale Unit co-leading the Southern Right Whale research theme under the Southern Ocean Research Partnership of the International Whaling Commission.

Dr Vermeulen said that now that the survey has been completed, all photographs taken will be analysed in the coming weeks for individual identification and compared to the Whale Unit’s southern right whale photo-identification catalogue, which contains over 2 300 recognisable adults from the previous 39 annual surveys. This analysis will be done with a computer-assisted image recognition system, followed by final matching of the whales by eye.

“Through such analyses, we will be able to determine which females calved this year, how long it took them to produce a new calf, their individual distribution and movement patterns, as well as their overall reproductive success with considerable accuracy.” These aspects are vital to monitor the recovery of the South African population of right whales, increasing at a rate of 6.5% per year, since the International Whaling Commission instituted international protections against whaling. “The analyses will also allow us to investigate further possible causes and consequences of the concerning decrease in sightings along our shores in recent years.”

The MRI Whale Unit thanks those who supported the survey, such as Silvercross Helicopters, De Hoop Collection, Denel Overberg Test Range, and private citizens along the route. The survey was carried out under a permit from the Department of Environmental Affairs and under specific Marine Protected Area permits from the relevant conservation authorities.

As this year celebrates the 50th anniversary of the aerial surveys, and the 40th year of consecutive photo-identification data collection, the MRI Whale Unit invites the public to a celebration on 24 October 2019 between 17h00 to 19h00 in the municipal auditorium in Hermanus. To attend, please RSVP to [email protected], and for more information please go to www.adoptawhale.co.za 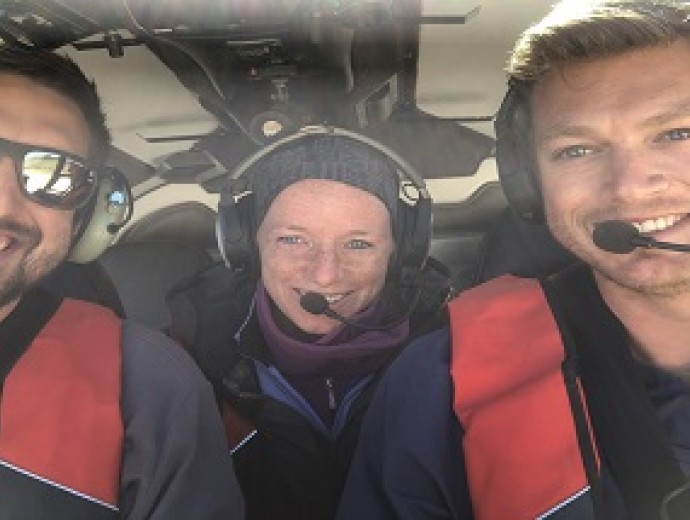