'If I want something, I can and will get it no matter what'

Meet Thabang Manamela who has just graduated with an LLB degree from the University of Pretoria, despite the hardships he endured. Manamela was born in Ga-Mashashane, Limpopo, with glaucoma, which resulted in him losing his eyesight at an early age.

“Pardon the cliché, but this is a dream come true. Achieving this LLB is symbolic of the fact that if I want something, I can and will get it no matter what. I know now that I really am in charge of my life and all my career aspirations,” he said.

Manamela started experiencing difficulty seeing the chalk board at primary school and later lost a substantial part of his vision. He was then enrolled at Siloe School for the blind, and later matriculated at Prinshof School for the partially sighted and blind. In 2014 he was accepted into UP and pursued a BA general degree. In 2015 he enrolled for an LLB degree.

“It was difficult studying at UP at first. The institution is huge and I was using a walking stick, having spent most of my time as a pupil with only 12 learners in the classroom back at high school. Now I had to share a lecture room with more than 400 people,” he said.

He would record all his lectures and type up his notes, using the Job Access With Speech (JAWS) screen reader, a software programme that enables blind or visually impaired people to read text  on a computer screen with a speech synthesiser or Braille display.

“The level of individual attention I got in high school was different from what I got at varsity, it meant that one had to consult with lecturers and seek assistance. It took a lot of growing up,” he said.

His first lecture was challenging.

“I was nervous but over time it got better. At some point my confidence also took a serious knock, luckily UP’s Disability Unit stepped in in terms assisting me with extra time for tests and exams and from then on it was smooth sailing. I also had friends who helped me navigate around campus.”

Manamela says everyone’s situation is different, and what “worked wonders for me can easily prove to be grossly inadequate for the next person”.

“My advice is: ask for and receive as little help as possible from the people around you. They may think that they offer to help merely out of pragmatism. However, more often than not this pragmatism smothers you and all that you are capable of. Never allow people around you to ever think of you through the prism of disability exceptionalism.”

Manamela works as a candidate attorney at VDT attorneys in Brooklyn, Pretoria. He says in the next two years he wants to focus on getting admitted as an attorney, and hopes to pass his conveyancing exam as well as write his notary exams. 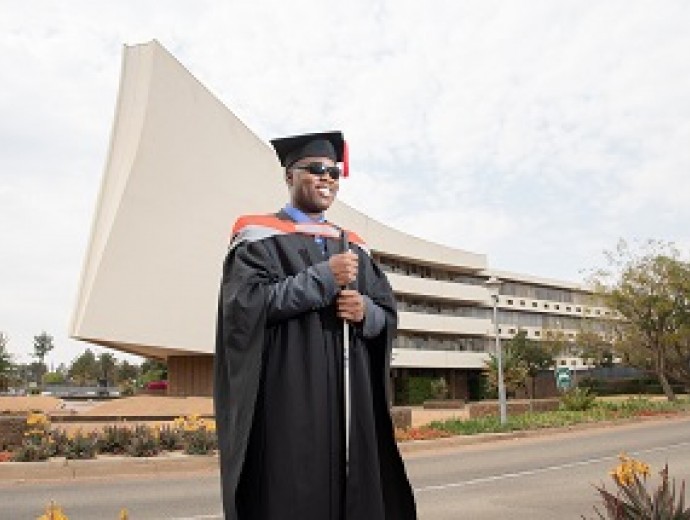