UP Hospitality Management students cook up a storm with indigenous ingredients

Final-year Hospitality Management students cooked up a storm for a special dinner hosted by the Department of Consumer and Food Sciences at the Future Africa restaurant, using indigenous ingredients foraged from the Future Africa Campus.

Professor Gerrie du Rand said: “The menu was inspired by the gardens of Future Africa and each item on the menu was made with the intention of highlighting the very rare, but indigenous plants of Africa found within the Future Africa gardens. This was the second event of this kind where indigenous ingredients and culinary heritage of our South African peoples are showcased and celebrated. These events are planned and executed under the watchful eye of our Culinary Arts lecturer Dr Hennie Fisher who guides the students to discover the challenges of compiling and preparing a menu using indigenous ingredients in a modern but authentic and scientific manner. We have planned a third such event early in March 2020 where we will take the preparation of the indigenous ingredients to an even higher level, while delivering culinary delights to our guests.”

The dinner was also attended by Professor Herb Meiselman, an internationally recognised researcher in sensory consumer science who delivered a lecture on “The influence of Context/Environment and Psycho-graphics on Product Design and Evaluation”, prior to the dining experience. The meals were paired with wines sponsored by Robertson Winery and Fat Bastard, which were represented on the evening by UP alumnus, Nico Davel. Hospitality Management student Zandile Finxa was tasked with designing the menu for the evening. She said she hoped that for the dining guests, especially Prof Meiselman, “the food produced was well worth the trip”.

“There’s always pressure. But the most pressure was just to make sure that we were happy with the food that left the kitchen and went to the tables … and we were. It took a lot of experimenting and playing with the ingredients. It was a fun experiment,” she said.

The dishes certainly did not disappoint. The range of their taste matched the irreverence and spirit of curiosity that went into the designing of the menu, as well as the variegated deliciousness that was plated on the evening.

In preparation for events of this calibre next year, third-year Hospitality Management students are preparing three-course meals that will be served every Tuesday and Thursday between 12:30 and 14:00 at the Old Agricultural Sciences Building. The cost is R140. Bookings can be made with Raine Smit at [email protected] or Shandre Candiotes at [email protected]. 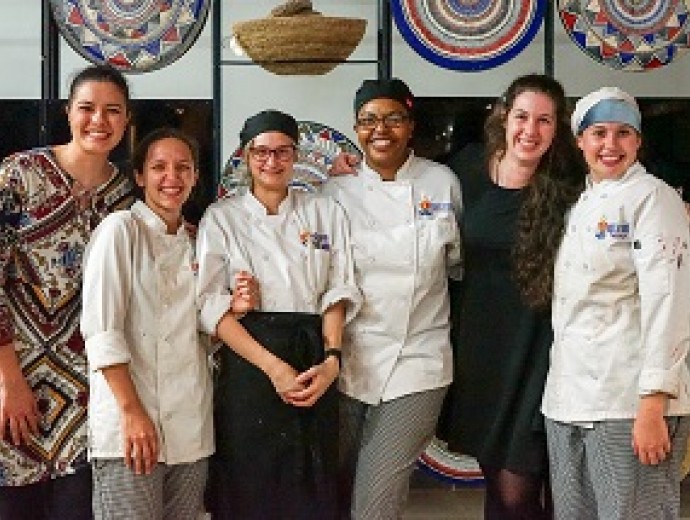