University of Pretoria doctoral candidates, Analike Blom van Staden and Bianca Fibrich won big at the 2019 South African Women in Science Awards. Both of them are currently involved with their PhD studies under the supervision of Professor Namrita Lall; a Research Chair in Plant Health Products from Indigenous Knowledge Systems.

The awards, which took place on Thursday night in Port Elizabeth, were organised by the national Department of Science and Technology (DST), and aim to recognise and award excellence by women scientists and researchers and to profile them as role models for younger women.

Blom van Staden and Fibrich won in the DST Albertina Sisulu Fellowships category, one of the awards’ five categories. This fellowship was awarded to six doctoral students in the fields of Natural Sciences, Engineering Sciences, Indigenous Knowledge Systems, Astronomy and the Humanities and Social Sciences. Blom van Staden’s PhD research in Medicinal Plant Science is on the plant diversity of South Africa and the vast indigenous knowledge attached to it. She said she had tapped into the combination of these two and found a plant with a novel application for progressive macular hypo melanosis (PMH), an overlooked dermatological disease.

“PMH is a hypopigmented disorder, in other words, a disorder causing the lack of pigment,” she explained.  She said winning the award had given her the confidence that she too could achieve greatness.

“Receiving this award gives me the confidence that I too can achieve something great and that my research can make a difference. This award provides the platform to influence and motivate the women around me even further,” she said.

Fibrich, on the other hand, has dedicated four years of her academic career to finding indigenous South African plants that can reduce ageing of the skin by targeting various biological molecules. The discovery that less than 1% of South Africa’s biodiversity, the third-largest in the world, has been commercialised spurred her on to thinking that this may just be the breakthrough the country has been looking for.

“Through this research I have been exposed to the various applications of plants for the treatment of human conditions and hope to continue to build my knowledge in this area.”

Fibrich said for her, this win would allow her to pay forward the mentorship she has received: “I have always looked up to the previous fellows of this award and [winning] it has put me in a position to pay all of the mentorship and guidance that I have received forward. It is so important to empower fellow females, especially those pursuing a career in science and to create awareness on the different career paths that exist in this domain,” Fibrich said.

The pair intend to continue working until they ultimately complete their PhDs. 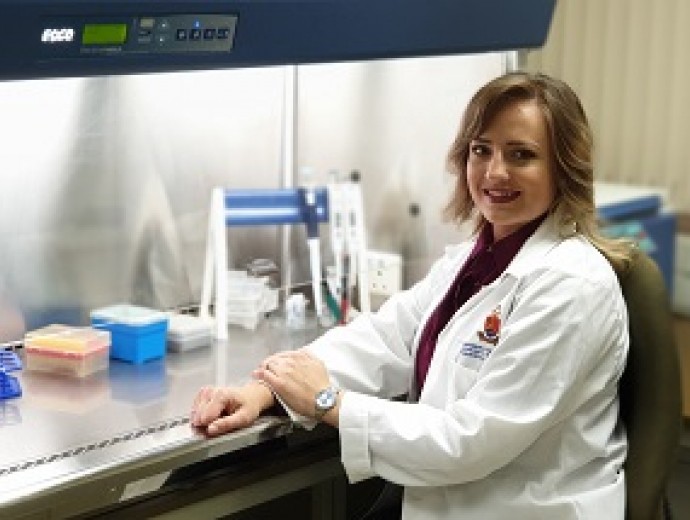