Sanushka Naidoo, associate professor in the Department of Biochemistry, Genetics and Microbiology at the University of Pretoria (UP), was recently elected chairperson of the Next Einstein Forum’s (NEF) Community of Scientists programme. The NEF is a joint initiative of the Robert Bosch Stiftung Foundation and the African Institute for Mathematical Sciences (AIMS), which has centres in South Africa, Ghana, Senegal, Cameroon and Tanzania.

“The next Einstein could be African,” Prof Naidoo said. “It is up to us to find and nurture such upcoming generations of Einsteins. I am looking forward to presenting our NEF Community of Scientists vision and progress at the next World Economic Forum.”

The NEF provides opportunities for some of the brightest minds in Africa to look at the most persistent problems experienced on the continent and apply technology, engineering and mathematics as well as the social sciences to come up with possible solutions.

“I am honoured and humbled to be elected by such accomplished young scientists,” Prof Naidoo added. “I feel inspired and motivated to lead the community of scientists one step closer to achieving our vision.”

The KwaZulu-Natal-born professor’s vast experience in the field of plant biotechnology will stand her in good stead in her new position. She heads the Eucalyptus and Pine Pathogen Interactions group and works closely with the Forest Molecular Genetics Programme, part of the world-renowned Forestry and Agricultural Biotechnology Institute (FABI) at UP. She is also a committee member of Future Africa at the University of Pretoria.

She has also published more than 30 papers in international peer-reviewed journals, was awarded a Y-rating by the South African National Research Foundation (2015-2020), a Mellon Foundation Mentoring scholarship for her doctoral studies in plant biotechnology, and serves as president of the South African Genetics Society (2017-2020).

Prof Naidoo first became involved with the NEF when she was awarded an NEF Fellowship (2017-2019), a programme that recognises the contribution of top young scientists and emerging leaders in Africa, and gives them the opportunity to grow their careers and present their work at the global NEF Spotlight Sessions. As part of the programme, fellows are expected to participate in national and continental policy formulation, cross-cutting research and innovation activities, lead public engagement around science and technology in Africa, and provide mentorship to early-career scientists and students.

During her tenure at the NEF, Prof Naidoo plans to focus on breaking down some of the barriers young African scientists face, such as lack of infrastructure, collaborative networks and resources. She says it’s important for people in leadership positions to remain positive and persevere despite challenges. Over the next two years, the NEF aims to strengthen ties with the community of scientists in order to offer them a strong support network that enables them to achieve their goals. The organisation also intends to build capacity and empower African scientists so they’re able to make use of international opportunities.

Prof Naidoo’s love affair with nature started at a young age. Her parents – both teachers – have always encouraged her to ask questions about the world around her. Her interest in plant science was piqued by a science teacher who encouraged learners to establish a nature club at school.

“We built a pond on the school premises and we watched a whole ecosystem develop over time. This became a teaching tool for our biology classes, and we were fascinated with how organisms depend on each other for survival.”

Her current research focuses on mechanisms that can confer broad-spectrum, long-lasting resistance by dissecting gene families and responses to pests and pathogens. With the development of new technologies, novel genetically modified crops are poised to increase yield and protect against pests and pathogens under harsh African climates.

When she’s not among the trees or in the lab, she loves spending time with her husband Tyrrell, her three children Tristan (15), Sunera (8) and Telana (7), and Dakota Rouge, whom she describes as “a beautiful King Charles Cavalier spaniel”. She also enjoys writing poetry and reading motivational books on leadership.

About 40% of the NEF fellows are women, and Prof Naidoo is quick to remind anyone that women have been integral to important scientific discoveries over the ages.

“I think of physicist Marie Curie, cytogeneticist Barbara McClintock and biochemist Jennifer Doudna as exemplars of women who have made impactful scientific breakthroughs. There are other types of contributions by women scientists that deserve attention too, such as Kenyan scientist Wangari Muta Maathai, who was the first African woman to win a Nobel Peace Prize for her efforts to combat deforestation. I believe that women will continue to break through glass ceilings and shape the future because of their passion and commitment to changing lives for the better.” 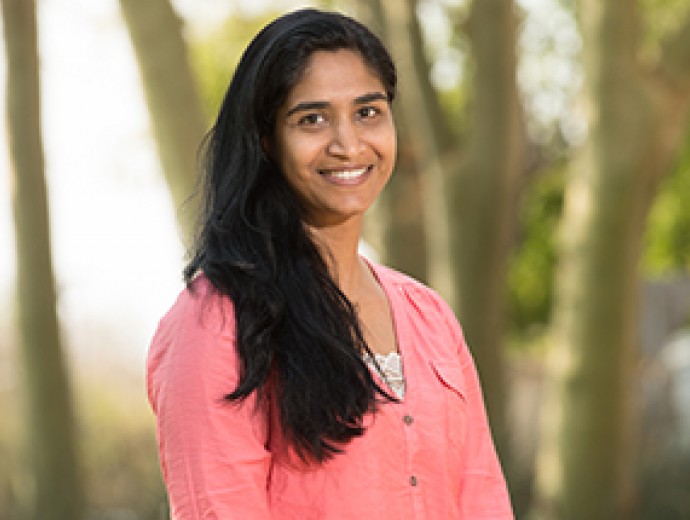