The AREND project focuses on the design, construction and testing of an unmanned aerial vehicle (UAV) that can be used to detect and distinguish between humans and large animals, such as rhinoceros and elephants, in harsh environments. The members of Team AREND are attached to four universities on three continents. The universities that are involved are the University of Colorado Boulder, United States; Helsinki Metropolia University of Applied Sciences, Finland; the University of Pretoria, South Africa; and the University of Stuttgart, Germany. Undergraduates, postgraduates, staff members and industry partners have collaborated to find a workable solution for the Kruger National Park in South Africa.

This international university engineering design team has been working together for the past three years. Two years ago, the project management was moved from the University of Colorado in the US to the University of Pretoria, with Dr Lelanie Smith from the Department of Mechanical and Aeronautical Engineering as the project manager. Once the integration phase of the embedded systems had been successfully completed by the Colorado team at the University of Pretoria in 2015, the next phase of project AREND was to develop a landing and launch system for the UAV.

Team AREND received considerable attention in 2017, when they were invited to present their system and project at the 7th EASN conference on Innovation in European Aeronautics, held in Warsaw, Poland; the Electronic Warfare South Africa Conference; and the 4th UAV Forum at the CSIR, Pretoria. Industry has responded very favourably to the project and various new networking and skills development opportunities have been established for students involved in it. Furthermore, the Faculty of Engineering, Built Environment and Information Technology at the University of Pretoria awarded its Teaching and Learning Excellence Award to Dr Lelanie Smith to acknowledge her excellent management of the project and the opportunities offered for student development through this project.

While students from the University of Stuttgart, Germany and the University of Colorado, US were visiting in December 2017, the full team completed the last captive flight test to check all the flight systems. The team is planning their first flight to test the landing system early in 2018. A new agreement with Aerial Monitoring Solutions also allows the AREND UAV to integrate an existing catapult launching system on which the team will be working in 2018. 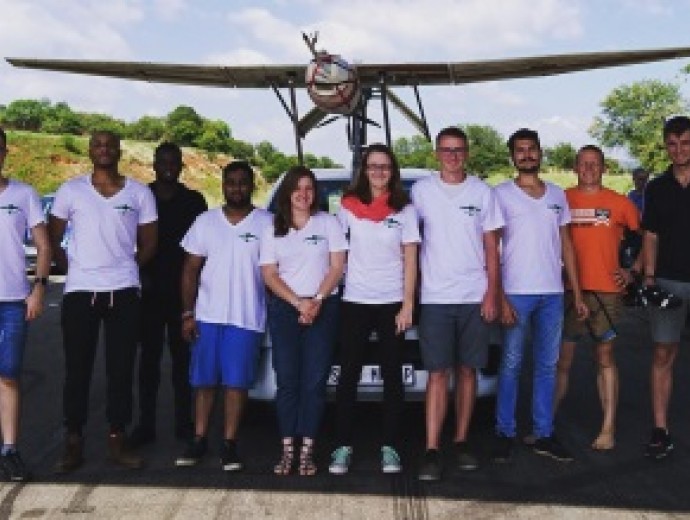