The Faculty of Law is proud to announce that our TuksLaw team beat the team from the University of the Witwatersrand in the final round of the South African leg of the 58th Philip C Jessup International Law Moot Court Competition. The national rounds were hosted at the offices of White and Case LLP International Law Firm in Johannesburg on Saturday, 25 February 2017.

As a result, the University of Pretoria (UP) team will represent South Africa at the international rounds of the competition in April 2017 on Capitol Hill in Washington DC. The Jessup Competition is the largest and most prestigious moot court competition in the world.

The UP team consisted of Mary-Ann Gettliffe (LLM student), Ashley Makgatho (second-year LLB student) and Tinotenda Kakora (final-year LLB student). Gift Kgomosotho, an LLM student and researcher at the Institute for International and Comparative Law in Africa (ICLA), served as the coach.

Professors Dire Tladi, Frans Viljoen, Christof Heyns and visiting professor Stuart Maslen (ICLA) served as judges in the internal practice rounds before this qualifying round of the competition.

As the team prepares for Washington, there will be further opportunities for staff and students to assist by acting as guest judges in the internal practice rounds. The 2017 compromis deals with environmental law (the sharing of natural resources and the equitable use thereof), cultural property and state responsibility.

Coach Gift Kgomosotho said upon the team's return to campus: 'I am very proud of Mary-Ann and Ashley. They have worked very hard for this. I admired the growth they showed between their try-outs and when they argued in court. Ashley was only a first-year when I selected him to be on the team; I saw raw potential that would turn into something great. While I had previously worked with Mary-Ann in 2015, I have seen her improve greatly this time around. Our researcher and assistant coach, Tinotenda – whom I have worked with closely for the past two years – has been instrumental here. She continues to impress with her skill of juggling Jessup with all her other responsibilities. Coaching this team has been a great pleasure because of the participants' sheer commitment to the process. We are very happy with what we have achieved and we realise that we shall have to do much more in preparation for the international rounds. Many thanks to everyone who acted as guest judges in our practice rounds. Most importantly, many thanks to Professor Heyns and Dean Boraine who made this possible.'

Kakora said that competing in the Jessup is no easy feat. 'Having participated in the competition in 2016 I can appreciate the intensity and dedication it takes to win. However, the 2017 team more than rose to the occasion. The team sacrificed their holidays and free time during the semester, and in addition to this, had to juggle schoolwork and other extra-curricular activities. Despite these challenges they performed extremely well.

'Being a master's student, an academic associate and working as a tutor off-campus, Mary-Ann's work ethic is nothing short of inspirational and her award for best oralist was certainly well deserved. I am also very proud of Ashley, who as a mere first-year law student, was able to not only grasp the complex concepts of international law (a module taught only at third-year level), but also to form cogent legal arguments and present them orally and in written form in front a of a panel of highly experienced and intimidating judges.

'I am very humbled to have worked with Gift Kgomosotho who, being a seasoned mooter himself, was able to coach and groom the team to a winning standard in a limited amount of time. I have learned a great deal from him and hope to use this knowledge should I coach a team one day.

'The team's performance at the South African qualifying round was excellent and I am excited to see how they perform internationally.'

The Faculty is very proud of the team's accomplishments and our best wishes accompany them to Washington DC. 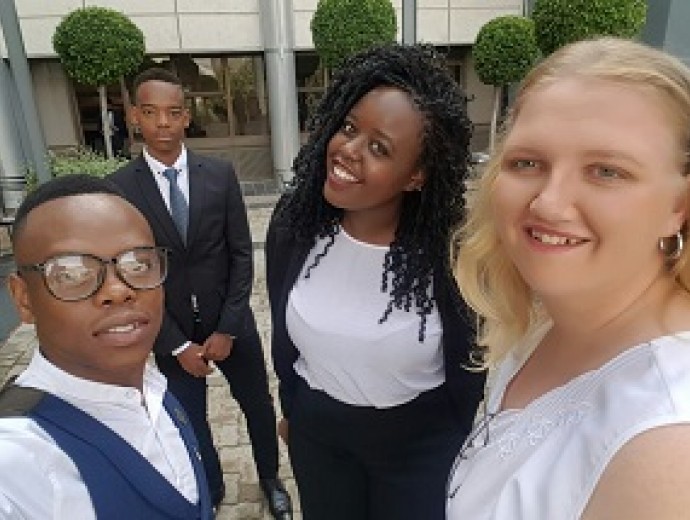