When the University of Pretoria (UP) conferred degrees on the law students who had finally achieved their goal of graduating, a well-known international human rights activist, Prof Karl E Klare from the School of Law at Northeastern University, Boston, USA, was honoured with an honorary doctorate in law (LLD honoris causa). In his acceptance speech, Prof Klare called on the legal fraternity to be on their guard against any threat to the culture of constitutionalism in the country.

During the change of political dispensation, Prof Klare worked with many South African legal experts to help make South Africa a democratic state. He lauded UP as an institution that has been able to transform itself and to become the inclusive, non-racial and diverse community it is today. He also mentioned UP’s academics from the Faculty of Law, especially the Centre for Human Rights, as being instrumental in the constitution-drafting process and continuing to this day to develop, diffuse and deepen the culture of constitutionalism in South Africa.

Prof Klare acknowledged his predecessors who were also the recipients of the LLD honoris causa and include former South African president Nelson Mandela, Constitutional Court judges Arthur Chaskalson, Ismail Mahomed and Yvonne Mokgoro and advocate George Bizos SC. ‘With the utmost gratitude to UP, it is the honour of a lifetime to me to have my name added to the list of these legends. I humbly accept this degree in the spirit of honouring these brave men and women and so many others who gave so much – many who have suffered and died – to bring democracy and social justice to South Africa and to launch its transformative constitutionalism project,’ he said.

He mentioned that crafting and adopting the constitution through relatively peaceful, dialogic processes was a great historical achievement. He commended South Africa for establishing innovative constitutional principles, which are, among others:

Although these principles are uniquely South African creations, Prof Klare said they echo in other jurisdictions, notably in India and Columbia. He called on South Africans, especially the lawyers, to be alert to any threat to the culture of constitutionalism created here in South Africa:

‘These constitutional principles and guidelines are precious achievements in the long striving to discover and entrench institutional foundations, human freedom and self-determination. South Africans are called upon to be the guardians of these accomplishments for all of the world’s people,’ he said. 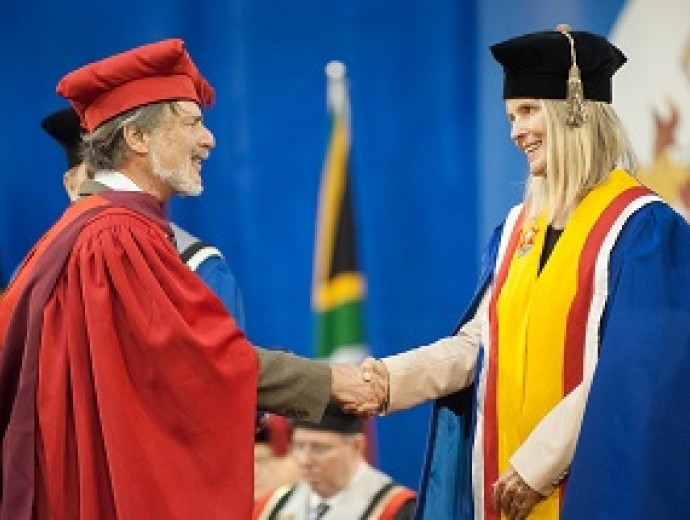 Prof Karl Klare is congratulated by Prof Carolina Koornhof, the Executive Director for Finance and Business Activities at the University of Pretoria.