Prof Brenner delivered the keynote address at the Leading Minds 1908 – 2008 Gala Dinner on 26 March 2008 - one of the highlights on the University’s centenary calendar at which University of Pretoria researchers were honoured for their contribution over the past 100 hundred years.

Prof Brenner spoke on “Creating and Using Knowledge in the 21st Century”.

Prof Robin Crewe, Vice-Principal: Research and Postgraduate Studies at the University of Pretoria, says "Brenner's unique contribution to new knowledge in biology coupled with his translation of this into tangible benefits for society, provides a model for a scientific career that serves as a guide to young scientists. Prof Brenner exemplifies the excellence in research achievement to which the University aspires.”

While visiting the University, Prof Brenner also delivered a seminar at the Innovation Hub on the morning of March 26 on “Adventures in Biotechnology: Lessons for the Future”. He also officially opened a street named after him. On March 27, Dr Brenner spoke about “The Next 100 Years of Genetics” when he delivered the keynote address at the SA Genetics Society Congress.

As part of his visit to the University of Pretoria, Prof Brenner aslo visited the Maropeng Cradle of Humankind outside Krugersdorp to add his footprint to that of other prominent South Africans. Premier of Gauteng, Mr Mbhazima Shilowa, was there to assist him.

Regarded as one of the past century’s leading pioneers in genetics and molecular biology, Brenner was the joint winner of the Nobel Prize in Physiology or Medicine for 2002 for discoveries concerning the genetic regulation of organ development and programmed cell death.

Amongst his many notable discoveries, Brenner established the existence of messenger RNA and demonstrated how the order of amino acids in proteins is determined. He also conducted pioneering work with the roundworm, a model organism now used to study genetics. His research with C. elegans garnered insights into ageing, nerve cell function and controlled cell death.

Sydney Brenner was born on 13 January 1927 in Germiston. He matriculated at 15 and obtained the degree MB BCh from the University of the Witwatersrand.

Click here for a short video clip of Prof Brenner's visit to UP. 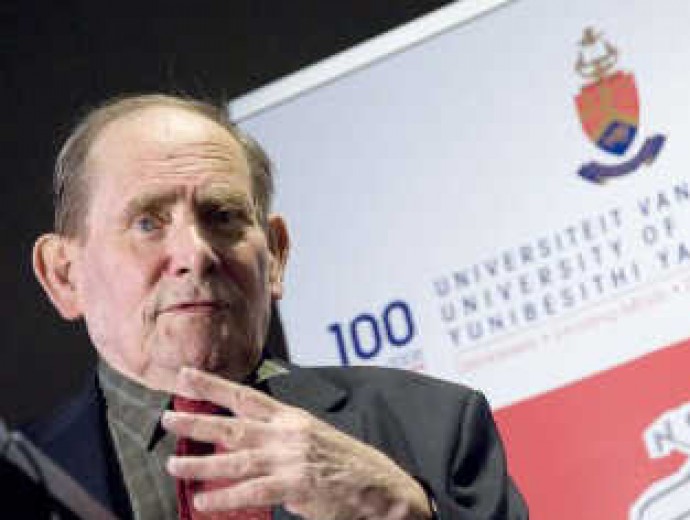