The University of Pretoria’s (UP) Faculty of Engineering, Built Environment and Information Technology (EBIT) has launched a new computer laboratory at the Edward Phatudi Commemorative School in Atteridgeville. This initiative is as part of the faculty’s Adopt-A-School project aimed at giving back to the community.

As part of the initiative, the faculty will assist the school with various other resources. This includes developing a go-green project, offering a mentorship programme in basic computer training to learners and assisting with preparations for the Eskom Expo for Young Scientists, among other projects.

“This initiative will assist prospective students and shape their minds. Our participation benefits EBIT by exposing our students and staff to an initiative that powerfully impacts society, not to mention ensuring a pipeline of talented students from the school,” says Professor Hein Venter, the Head of the Computer Science Department at EBIT. EBIT adopted the Edward Phatudi Comprehensive School in Atteridgeville this year. The faculty' first initiative was born out of the STEM Ambassador Programme by the Institute of Electrical and Electronics Engineers (IEEE) which recognised IEEE volunteers' contribution to STEM education. An EBIT Staff member was selected to be an ambassador for this programme. This led to this initiative which was launched at a UP Open Day at Edward Phaudi in March where surrounding schools were also invited.

According to Prof Venter, there are plans for another school in Soshanguve to receive similar support. “The faculty attracts high-quality students and staff who actively contribute to their fields of specialisation. Our graduates can contribute to their respective industries and general social welfare; that is why we support these young minds,” he says.

“Our slogan, ‘innovate our tomorrow,’ helps to keep the faculty on the path of pursuing innovation. We are committed to remaining relevant and addressing the challenges of the future of work,” he adds.

The results are already evident.  In July, the faculty sponsored five learners to attend EBIT Week, where they learned so much from the experiences that they applied to study at the University of Pretoria next year.

Senior lecturer, Dr. Lelanie Smith, who is responsible for coordinating the community engagement projects for the faculty, says one of the pillars of this initiative is the Joint Community-Based Project (JCP). This is a credit-bearing educational experience which ensures that students not only engage in interpersonal skill development, but also take part in service-learning activities – all underpinned by the UN’s 17 Sustainable Development Goals (SDGs).

“Typically, we have approximately 1650 second-year students and work on 350 community projects across Gauteng. There are two 40-hour parts to this year's module. First, the students are made aware of their potential global impact through their degree in the form of Sustainable Development Goals. The idea here is to cultivate and stimulate global awareness and to help students understand their local impact from that perspective,” says Smith.

The initiative at the Edward Phatudi Commemorative School is among of 350 JCP projects the faculty has where it donates more than 50 computers annually to several schools around Gauteng.

The principal of the Edward Phatudi Commemorative School, Edward Mkhwanazi, says having good resources is important for teaching and learning. “The Computer Centre will make a difference because it will help learners, staff, and community to improve their computer skills.”

He says teachers and learners were excited at the opportunity of having a functional computer centre where they can sharpen their computer skills: “Having such infrastructure in communities will allow us to contribute to and shape modern technology. Our learners are inspired and have the desire to do well and further their studies in ICT.”

Student Asanda Mongo (18) says she finds Chemical Engineering fascinating and wants to study the subject when she matriculates. “Through the lab, I hope to learn more about it because I believe the future will be better through having access to technology,” she says.

Seventeen-year-old Dimpho Mokwele, who wants to study metallurgical engineering, says she is excited about the future because technology opens the door to more innovations and can help to develop ways to benefit society. “This can help us find new and exciting prospects and solutions to many problems that may arise,” she adds. 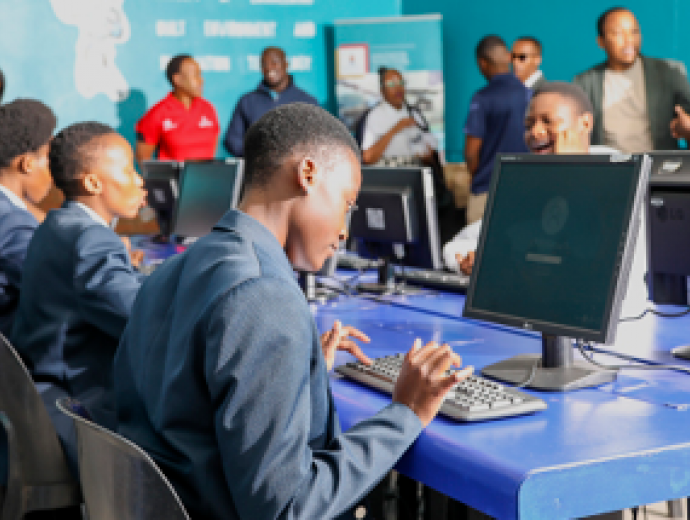 Teachers and learners at the Edward Phatudi Commemorative School now has a functional computer center where they can sharpen their computer skills.