UP is playing a pivotal role in addressing homelessness in Tshwane

Three professors at the University of Pretoria (UP), in three different disciplines, have joined forces to coordinate care for homeless people. And it is starting to make an impact. The professors are contributing to a national policy for the homeless, with a project that forms part of the framework for South Africa’s National Health Insurance (NHI), in collaboration with The Presidency of South Africa.

Professor Debashis Basu, Academic and Clinical Head of the Department of Public Health Medicine at UP, said: “We are not talking the talk: we are practicing it”.

They are doing this through the research unit of UP’s Community Oriented Primary Care project (COPC). This is where the university’s Department of Public Health connects with the Department of Family Medicine, which is headed by Professor Jannie Hugo.

Collaborating further with UP’s Centre for Faith and Community, where Professor Stephan de Beer is at the helm, the three are making strides in addressing the interconnected health and social problems of the most vulnerable people in Tshwane.

Prof Hugo said coordinating care was the most important aspect to ensure the success of the NHI, “which means building efficiencies that don’t exist.”

“Our country, our society, our systems are notorious for being uncoordinated,” he said.

“So this is a very particular focus to coordinate care. It’s not an NGO project distributing blankets. It’s essentially an implementation research endeavour to say: how do we implement this in a structured manner that has impact and that makes sense in the long run?”

During a meeting of the United Nations Habitat and the Institute for Global Homelessness in New York in April, Professor Stephan de Beer said: “as long as overcoming homelessness is seen as a charity or social development concern only, and not as an expression of social justice, the global homeless population will not be free”.

He spoke in New York about UP’s involvement in the Tshwane Homelessness Forum, which was established in 2015 between local government, non-profit organisations and universities. Tshwane City Council adopted the forum’s policy on homelessness and is now implementing it.

In 2020 the COVID-19 pandemic precipitated the establishment of a Homeless Task Team. Tshwane City Council tasked UP to formalise it and the university created an operational centre. It is run by the non-profit sector and the university provides technical capacity and research support.

Prof Jannie Hugo, Prof Debashis Basu and Prof Stephan de Beer are playing a pivotal role in addressing homelessness in Tshwane. The professors are contributing to a national policy for the homeless, with a project that forms part of the framework for South Africa’s National Health Insurance (NHI), in collaboration with The Presidency of South Africa.

“We run quarterly communities of practice where nonprofit workers, government officials and researchers reflect together on what we are learning,” Prof de Beer told the gathering.

“In a 10-day period, we were able to open 27 temporary shelters housing 2000 people, complemented by psychosocial and healthcare services, family reconciliation, and vocational preparation. We managed to do in 10 days what we could not do in 10 years before that. We can never again say it's impossible to house the homeless population because COVID proved we can if we want to.

“For the first time, since 2021, the province has a policy on homelessness and invests in homeless programmes,” said Prof de Beer. He explained to the UN gathering that 50% of the homeless population in Tshwane were young and healthy, but unemployed.

There is also a growing number of working homeless people who choose to live near where they work because they don’t want to spend long hours travelling, exasperated by spatial inequalities and poor public transport.

“If this can be replicated all across the city, homelessness can end for large percentages of people,” he said.

Prof Basu attributed the success of UP’s health interventions with homeless communities to the university’s approach, a sense of goodwill that its prominent branding reinforced. He said they didn’t enter sites and offered “the jab”, or COVID-19 vaccination, with the aim of hitting target numbers. They used the opportunity of vaccinating the homeless to screen them for chronic diseases such as blood pressure to understand their basic health needs.

He mentioned one incident where they had helped a victim of a stabbing at the homeless shelter at 2 Struben Street, Pretoria. Providing medical care to the victim following that incident helped UP gain the trust of the community.

“I've seen it repeatedly:  when we enter a community and they see the UP car, they’re satisfied and say, ‘OK, let them come’. That gives us a tremendous opportunity” said Prof Basu.

“That is the uniqueness of the UP branding, as well as our comprehensive care coordination, which is the added value we bring,” he said.

UP is now integrating its work with Tshwane’s homeless into the first steps towards an operational NHI. Without an electronic database that can identify people, the NHI would not be able to operate. With so many people in the country, both local and foreign being undocumented, working with an identity document (ID) alone is not the answer.

The government has set up the Health Patient Registration System (HPRS) which, Prof Basu explained, is an “alphanumeric code for everybody who will be accessing the NHI, a uniform number that will identify people when entered into the system”.

As it includes IDs, so far 57 million are registered in the HPRS system.

The COVID-19 Electronic Vaccination Data System (EVDS) has also helped this registration. Prof Hugo said it was “an international example of a successful data system that integrated all the sectors in health in South Africa, including the private sector, the public sector, the NGO sector. This is an important first example of engaging the undocumented in an NHI-type service.”

Prof Basu said UP’s project was linking the registration of IDs, the HPRS and the EVDS with the National Health Laboratory (NHL) service, which is the database of 40 million people who have a medical specimen in that lab.

“In a hospital like Steve Biko, the challenge is that if you don't have an ID, you cannot enter. But we treat anybody who has an emergency, even if you are a homeless person, or are in the country illegally. They have a hospital file number. We include this fifth component in our project. 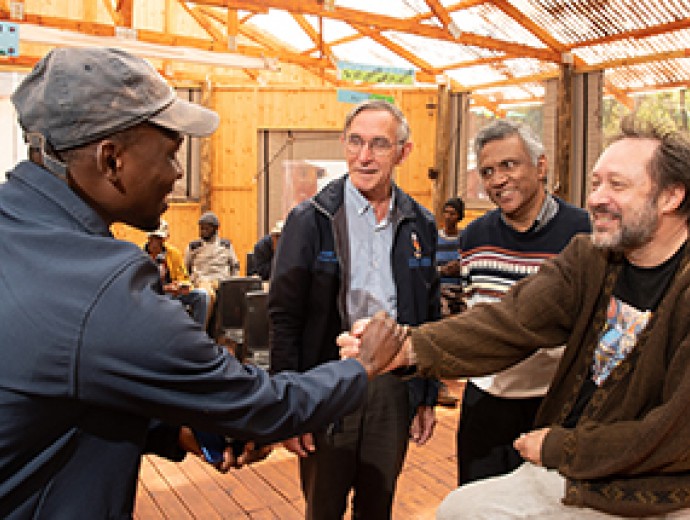