The University of Pretoria (UP) Pre-University Academy (PUA) recently collaborated with the Hong Kong Polytechnic University to provide school learners from Mamelodi with a rich learning experience in coding.

The UP-PUA is a secondary school project that readies high school learners for tertiary education and focuses its efforts on mathematics, science, creative writing, and philosophy. The academy is currently being run on UP’s Mamelodi Campus and will also offer its services on the Groenkloof Campus this year. Hong Kong Polytechnical University’s Department of Biomedical Engineering, Department of Computing, and Service Learning and Leadership Offices teamed up with the UP-PUA to run an online workshop and competition for learners in coding.

Learners were coached in coding various types of two-minute noodles, lollipops and emojis and, during the final competition, they had to pretend that they are blind and going shopping for noodles and lollipops.

The workshop, which took place from 9 to 14 July 2022, involved 45 students from Hong Kong Polytechnical University, 75 learners from the UP-PUA, and five students from UP’s Faculty of Engineering, Built Environment and IT enrolled in the compulsory undergraduate community-based project module. The university students taught the learners basic computer programming.

“This was the third e-service-learning between the UP-PUA and the Hong Kong Polytechnical University,” said Dr Martina Jordaan, Head of Community Engagement Research and Postgraduate Studies at UP’s Mamelodi Campus, who coordinated the international collaboration. The UP and Hong Kong polytechnical students met each other before the project and shared information about their cultures. Janco Venter, a UP student who was involved in the previous two projects, shared tips on how to work online with the UP-PUA learners.

The learners were coached in coding various types of two-minute noodles, lollipops and emojis and, during the final competition, they had to pretend that they are blind and going shopping for noodles and lollipops. “E-service learning gives the learners the opportunity to collaborate with the teams in Hong Kong and in the process learn basic coding that will increase their knowledge in skills that will be required in possible future career paths,” Dr Jordaan said.

Alicia Tjale, a Grade 8 UP-PUA learner, said, “The experience was fun, mind-blowing, and exciting. I learned a lot about computer programmes and how they work.” Fellow Grade 8 UP-PUA learner Elsa Tlou said, “I found the Hong Kong project interesting, and it was helpful because I got to know more about using artificial intelligence and machine learning to help visually impaired people. And it was fun.” 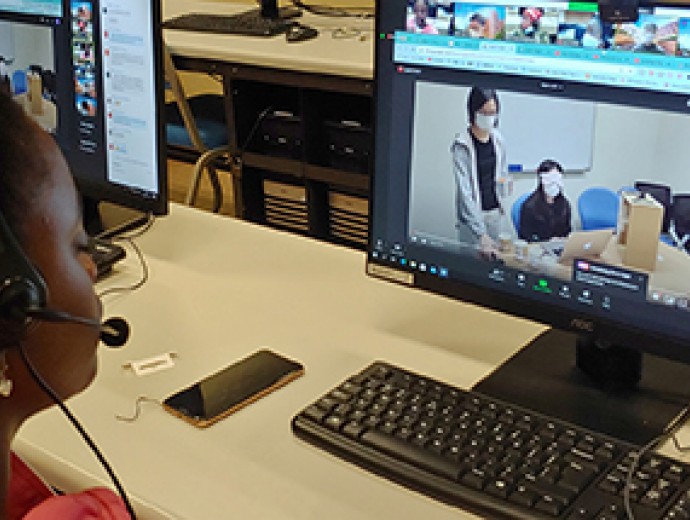