The long-crested eagle (L. occipitalis), an African bird of prey naturally occurs in moist woodland and forest edges, particularly if that habitat is near grassland, marshland, a river or a stream. It is sometimes also found in drier woodland, mixed farmland, on grazing land or on the edges of orchards or plantations.

Up to 98% of the diet of this species consists of rodents including the greater cane rat, African marsh rat and four-striped grass mouse. It was also recorded that frogs and lizards, fish and fruit and even other birds including owls and the young of other raptors, could form part of its diet.

However, on the odd occasion birds of prey will eat doves which sometimes can be infected with trichomoniasis (also known as canker in doves and pigeons), a parasite of the upper digestive tract causing accumulation of necrotic material in the mouth and oesophagus. Adult pigeons and doves often show no obvious symptoms of the disease, and the parasite spreads quickly between birds through direct contact at feeding and watering points. When eagles feed on these birds, they in turn become infected; in eagles the parasite causes major damage to the mouth, crop and pharynx.

Recently, a long-crested eagle was found collapsed on the ground and brought to the Bird and Exotic Animal Hospital situated in the Faculty’s Onderstepoort Veterinary Academic Hospital (OVAH). This private clinic provides training to Faculty students on an elective basis and has been the temporary home and treatment centre of many exotic species over the years.

On arrival the eagle was diagnosed with extremely severe trichomoniasis which, if not treated in time, is often fatal. Veterinarian and owner of the clinic, Dr Dorianne Elliott explains: “Not only was the eagle emaciated and unable to stand, the parasite ate away a large part of his palate and throat so he could not eat and his tongue was pushed right out of his mouth.”

Left: A hole in the throat was caused by infection. Right: Surgery had to be performed to repair the damage.

Treatment included putting the eagle on a drip for three days and Dorianne had to hand-feed him for over a month while surgery formed part of treating his mouth. It was a painstaking, meticulous process to restore the eagle’s health. The heart-warming news is that he made a superb recovery and is almost ready to be released again.

Dr Elliott adds a cautionary note: “Our raptors are being killed by eating infected doves which is abnormal prey for them in the wild. People must please understand that by feeding doves they are creating an abnormally high density of them. This allows for infected birds to quickly spread the parasite to others through their saliva.”

“The best thing we can do is to clean out water bowls on a daily basis to minimise the spread of trichomonas”, she says.

Left: The eagle had terrible mouth lesions that pushed his tongue right out of his mouth so he could not eat. Right: Fixed!. All's well that ends well. 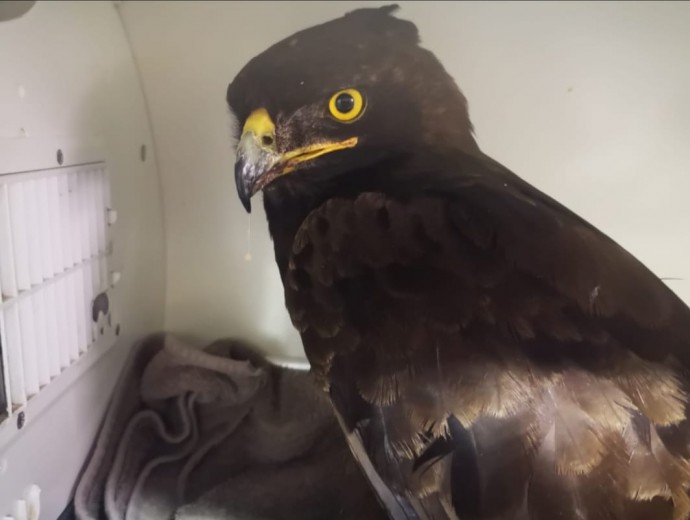 The eagle in an incubator