The 18-year-old Benjamin Richardson (TuksSport High School matriculant, TuksAthletics Academy graduate and now UP-Tuks student-athlete) seems to love nothing more than to medal at ASA National Championships. His tally for this season is three gold medals and a bronze.

It should be no surprise. Over the last four years, the Tuks sprinter has improved his personal best time over 100 metres by nearly a second. In 2019, it was 10.87s. It is now 10.08s. It means he is faster than Akani Simbine was when he was 18.

Still, Richardson is not one to rest on his laurels. One would have expected that he would have been chuffed to run 10.08s at the end of April in Gaborone. But the Tuks athlete has mixed feelings. He has finished second, and that is not on to him.

"I guess it is a big deal, but it does not make me happy. I knew I could have done better. But I think I have got to accept what I have achieved. Hopefully, soon I will run a faster time."

Asked what he has to do to gain that hundredth of a second, Richardson said – "I need to work on staying calm. As soon as I get out of the starting blocks and someone is ahead of me, I start to rush things and not think clearly. It is costing me."

The one thing Richardson has going for him is never giving up. He proved it over the weekend during the USSA Championships in Cape Town. The Tuks athlete was certainly not the fastest out of the starting blocks. It took him 50 metres to draw level, but there was no stopping him once he did so. He so nearly got Tuks to win the 4x100m-relay with his fantastic acceleration.

Richardson is also the South African Under-20 champion in the 100m and 200m events. During the recent South African Senior Track and Field Championships in Cape Town, he won a bronze medal in the 200 metres. The Tuks athlete credits his success to his coach Paul Gorries.

One can't help but compare his running style to Usain Bolt's. Richardson will be the first to admit there is still a lot of hard work to be done before he can be compared to the sprint legend.

But from a physical perspective, he is on par with Bolt. The Jamaican is 1.95 metres tall and wears size 13 shoes. Richardson is not quite sure how tall he is. He guesses 1.91 metres. He wears a size 12 shoe.

Tuks is the 2022 USSA Athletics Championships title winner, collecting 28 medals and two medals in the A and B section. North-West University finished second and UJ third on the final medal standings. 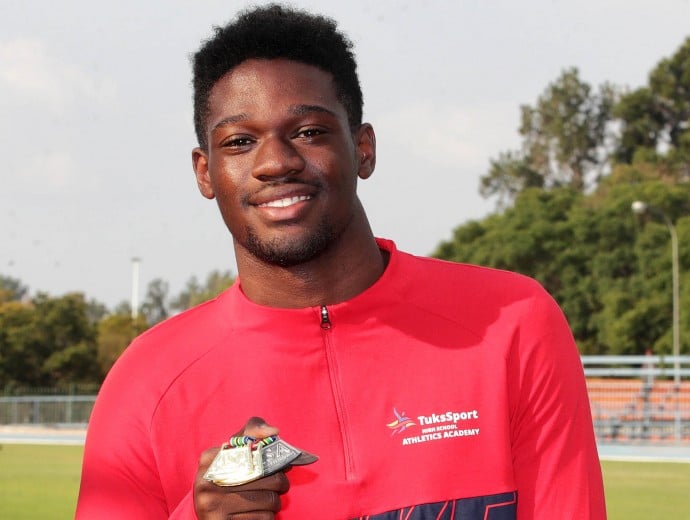