#TuksFootball: Tlisane Motaung’s 'Midas touch' has turned things around for AmaTuks in the GladAfrica Championship

One swallow does not make a summer, but it can't be denied that Tlisane Motaung seems to have a "Midas touch" when it comes to coaching at TuksFootball. He gets teams to win.

Motaung guided Tuks to win the Varsity Football title in 2017. Since last year, he has been responsible for turning things around for AmaTuks as a permanent head coach. AmaTuks are currently second on the 2021/22 GladAfrica Championship log standings.

All they need to do is win their last two games. If they do, there is a real chance of being back in the topflight league of the PSL now known as the DStv Premiership. The last time they played in the top division league was in 2016.

This season, Motaung has already worked his magic, getting AmaTuks to play in the 2022 Nedbank Cup. The team reached the quarterfinals, following a 3-2 away defeat against Royal AM. This is AmaTuks' first Nedbank Cup appearance since 2016.

AmaTuks' success can only be ascribed to pure passion. That much becomes clear when Motaung starts talking football.

"Football is what I know. Growing up in a township in the Free State, I was six when my brother first took me to play football. I immediately fell in love with the game. I don't see myself ever doing anything that does not involve football. Football is in my blood."

Don't try and talk to Motaung about any Hollywood "blockbuster" movie. He will have no idea what you are talking about. He can't remember when last he watched a movie. His favourite means of relaxing is to sit down on the couch with a good cup of coffee and watch football.

"Over a weekend when I am not working, I can watch football from early morning to late into the night. I watch everything…Premier League, Italian, Spanish, French and African football. It is crucial to stay abreast of what is happening in the game."

Motaung boasts the unique distinction of possibly being the first AmaTuks coach to have genuinely come through the ranks.

"I am who I am today due to the support and guidance I have received from the decision-makers of TuksFootball and the University of Pretoria.

"I started playing for them in 2004. From 2005 to 2009, I was captain of the team. Definite highlights were winning the USSA Football tournaments on two occasions.

"The big turnaround in my football career happened in 2010. Somehow I got poisoned, spending two weeks in a hospital intensive care unit. I thought I was going to die. TuksFootball supported me through this ordeal, and I am forever grateful for it.

"I tried to make a comeback, but it was to no avail. My mind was willing, but not the body. Still, TuksFootball was not prepared to give up on me. They encouraged me to stay involved as an assistant team manager. The biggest surprise came when they asked me to consider coaching one of the club's teams. I was initially reluctant because I never considered becoming a football coach, but I have no regrets."

On Sunday, 8 May, AmaTuks are playing Cape Town Spurs at Athlone Stadium in Cape Town and next weekend, they play the Hungry Lions in their last match of the season. AmaTuks was victorious in their home league encounter against Spurs. The game against the Lions ended in a draw. Motaung is confident that this time his team can win both games.

"Scoring goals will be vital, especially since Richards Bay FC and we both got 50 points after 28 games. The team that wins the tournament automatically qualifies to be in the DStv Premiership. The runner-up has to play a relegation game. It might boil down to goal difference. As things stand, Richards Bay FC has got the better goal difference. So the more goals we score, the better." 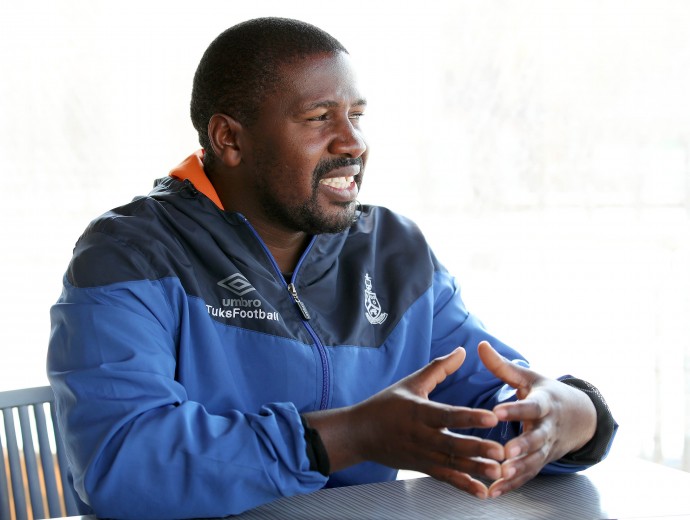