In what is possibly one of the best fightbacks ever by a Tuks team, Tuks beat Maties 29-23 in the 2022 Varsity Cup final on Monday, 25 April. It genuinely took spirit and perseverance to claim the victory. At one stage in the second half, Tukkies trailed 23-10, but they would not give up. Bernard van der Linde scored the winning try with two minutes left to play.

Amazingly, it is the first time since 2013 that Tuks has beaten Maties in Stellenbosch. The victory means that Tuks has equalled Maties' five Varsity Cup titles. Tuks is also the first team to finish fourth on the log and win the tournament. It is the fourth time in five finals that Tuks got the better of Maties.

A celebratory Professor Tawana Kupe, Vice-Chancellor and Principal of the University of Pretoria (UP), said: “Congratulations to defending champions Tuks on winning the Rugby Varsity Cup 2022 last night! The team showed resilience as they fought back against Maties in a riveting finish. They never gave up. This is what we teach our students at UP –  to be excellent and resilient in academics and sport, while we have world-class sports facilities.”

He added, “It is amazing that Tuks has won the Varsity Cup in 2021 and 2022, in the midst of a global pandemic. I am so proud of our players, coach and the team manager for their tenacity and that they equalled Maties record of five tournament wins. Congratulations also to our U20 team.”

When asked how Tuks could pull off one of the biggest upsets in the Varsity Cup tournament, a smiling Lincoln Daniels (Tuks captain) said he was not allowed to give away team secrets, then added that it all boiled down to composure.

"When it mattered, no one panicked, and everyone stepped up. Credit must go to John-Laffnie de Jager, our psychologist, who has done some amazing stuff."

"Maties started off playing brilliantly in the first 20 minutes. We were just sort of hanging in there. Maties dominated in the scrums and lineouts, but we won the small battles. During halftime, I made a few tactical changes; it paid off. In the latter stages of the game, our forwards started to dominate. All in all, it was a fantastic team effort. I am so proud of the team."

Tuks flanker, Stephan Smit, was outstanding. The television commentators labelled him the "universal soldier": the guy that you want to fight in your trenches. Smit seemingly never gets tired of being where he is needed, time and time again. It led to him making a match-saving tackle at a pivotal time of the game. He was deservedly the FNB Player That Rocks.

Part of his brilliance might be because he did not get to play for Tuks in the semifinal clash against Shimlas. To him, playing rugby is not about sitting on the bench. He wants to be in the thick of the action. So last night, he had something to prove.

Smit is not one to take sole credit for what happened on the field. To him, it was a team effort.

"It has been a privilege to be one of the boys. We showed character when it mattered. We had to; part of Tuks' sports culture is to never give up. You can't [give up] if you play to honour Tuks' ‘stripes’.

Tuks scrumhalf, Bernard van der Linde, was outstanding. It is hard to believe he is only 19. He played like a true general dictating thing from behind his forwards. His tactical savviness led to him scoring two seven-point tries.

His second was perhaps the best of the game. Tuks fullback, Stefan Coetzee, got the ball just outside his 22-metre line and started running and sidestepping, gaining metres with each step. He timed his pass to Van der Linde to perfection.

Kabelo Mokoena was the one who turned things around when he scored twice within 13 minutes.

Tuks Young Guns, under the headship of Kennedy Tsimba, were also victorious, beating NWU Eagles 22-14 in the final. It is the sixth time Tuks has been crowned champions. Mawanda Mdanda of Tuks, was brilliant in the scrums as he walked away with FNB Player That Rock prize. 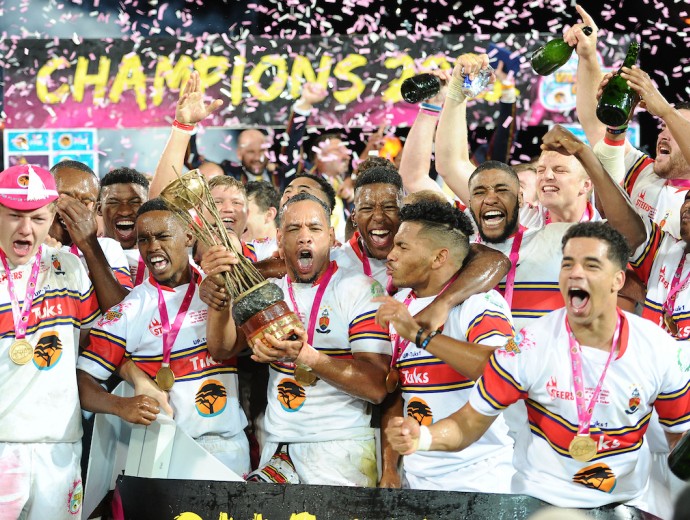