On 6 August 2020, the Pretoria University Law Press (PULP) based at the Centre for Human Rights, Faculty of Law, University of Pretoria, held its first-ever virtual book launch. The edited volume of essays titled Exploring the link between poverty and human rights in Africa is edited by Ebenezer Durojaye and Gladys Mirugi-Mukundi, with contributions from eminent scholars from diverse backgrounds. PULP is a non-profit open-access publisher focused on advancing African scholarship.

The book explores poverty from a human rights perspective, locating the issue firmly within an African context. Its central message is that poverty is not necessarily a failure on the part of an individual, but rather caused by the actions or inactions of governments, which are often exacerbated by structural inequalities in many African societies. The book draws attention to the critical vulnerability and daily assaults on human dignity that accompany poverty. Importantly, it looks not just at resources but also at the capabilities, choices, security and power needed for the enjoyment of an adequate standard of living and other fundamental civil and political as well as socio-economic and cultural rights. The book will be useful to researchers, policymakers, students, activists and others interested in addressing poverty.

Judge Kollapen expressed the view that the human condition of poverty is not a matter of destiny or divinity but is due to choices and policies made by institutions such as governments or non-state actors that results in poverty. According to him, poverty in Africa is not a resource problem but one of resource allocation and control. He placed emphasis on how all the manifestation of poverty, constitutes the violation of a number of rights. The need for further debates on whether poverty in itself constitutes a human rights violation, as well as strategies to be adopted in order to overcome poverty, was therefore stressed.

Prof Liebenberg discussed four dimensions in examining poverty in Africa through the lens of human rights. These dimensions are the normative, contextual, institutional and methodological. She elaborated on how various chapters in the book spoke to the four dimensions.  In addition, she spoke about future directions for further research on the theme of poverty and human rights. Further research that the single volume book could not address include: the multiple conflict situations in Africa and the impact it has on human rights and poverty; the debt burden of African states; the responsibility of the international community to contribute to sustainable development in Africa; resource extraction by multinational cooperations; Africa’s burden of disease; and the devastating impact of the COVID-19 pandemic on the future for human rights and poverty eradication in Africa.

Her criticism also underscored the narrow focus of the book chapters on Southern Africa. The editors of the book and PULP were urged to consider working on a book series on human rights and poverty in Africa which would address contextual specificities of different regions in Africa as well as various themes that were not addressed within the scope of the current book.

Mirugi-Mukundi spoke on behalf of the editors. According to her, the journey of the book began in 2011, when the Dullah Omar Institute was commissioned to give technical assistance to the United Nations Special Rapporteur on Extreme Poverty and Human Rights. This assistance was to gather information from Africa that would contribute towards identifying key challenges to the full enjoyment of human rights for people living in extreme poverty as well as identifying efficient measures to promote such rights.

In addition, Mirugi-Mukundi stated that besides the significance of addressing poverty in Africa from a multi-disciplinary approach, the book places human rights at its core, which is a significant contribution to the debate on poverty and human rights in Africa. This is premised on the fact that African governments are responsible for adopting policies and programmes that would prevent poverty in their countries. She added that the book resonates with the approach on the African Commission on Human and Peoples’ Rights to promote and protect human and people’s rights as well as address poverty in Africa. Giving more insight on the book, she pointed out that the book is divided into four main themes and does not feature francophone and lusophone countries, but that the editors would consider taking a wider approach in subsequent volumes.

Two contributors to the book also made presentations.  On her part, Prof Ntlama expressed the view that with the dawn of the COVID-19 pandemic, the book addresses the dual function of equality, namely as a foundational value and as a constitutional right. Her insight is that the emergence of COVID-19 has exposed the deep social and structural inequalities in Africa. Lastly, Dr Nkrumah also highlighted the book’s relevance in underscoring the role of African institutions such as the African Commission on Human and Peoples’ Rights in ending poverty on the African continent. He concluded that awareness creation through advocacy would help alleviate poverty in the continent.

Dr Gustav Muller, who teaches property law and land reform in the Faculty, and who is also a member of the PULP editorial committee, acted as the programme director. Dr Muller acted as the PULP ‘shepherd’, responsible for steering the book through the peer review and publication process. 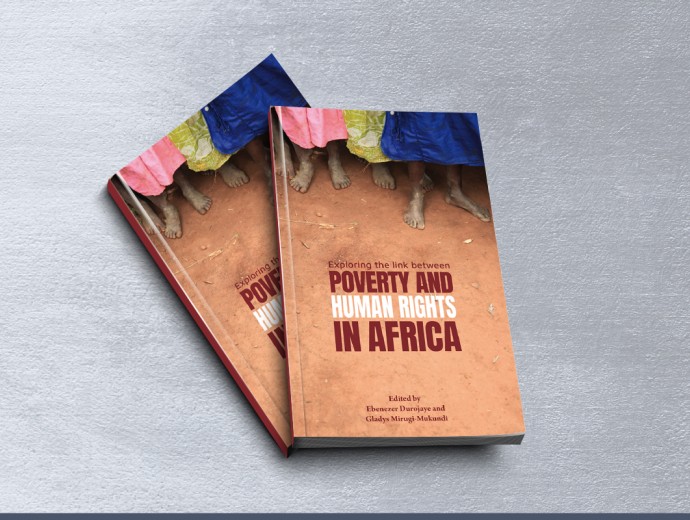 Exploring the link between poverty and human rights in Africa