University of Pretoria (UP) student Andries Nigrini recently raced to a third-place finish during the virtual edition of the World University Cycling Championships. About 20 riders from around the world competed in the event, which is sponsored by the International University Sports Federation.

While virtual racing is done on a stationary bike in the comfort of your own home, this does not necessarily equate to an easy time in the saddle. The UP cyclist says his legs felt like they were “on fire” after the first major climb. “It felt like it would never end,” says Nigrini, who also won bronze in the Under-23 individual time trial during the South African Championships in Pretoria last year. “I took 18 minutes to reach the summit of the first climb. There was a stage where my legs really started to rebel against the eternal punishment it had to endure.”

The event was hosted by Zwift, a cycling and running training programme that connects an interactive turbo trainer to a computer, enabling cyclists to ride through virtual landscapes. It usually includes steep climbs, downhill sections and sharp turns. The bike’s resistance is continuously being adjusted according to where a rider is on the course.

“The beautiful thing about virtual racing is that you don’t have to worry about oncoming traffic or crashing out on a sharp bend,” says Nigrini. “At times I closed my eyes and focussed only on my pedal strokes, breathing and so on.”

The students raced on the Austrian Innsbruck course, which was used for the 2018 championships. This year’s event resulted in a duel between UP’s Nigrini and Dutch riders: former world champion Adne van Engelen, who placed first, and Jeroen Luijks, who came second. UP cyclists Kieran McKenna and Luke Bushell also made a good showing by finishing fifth and sixth respectively.

The circuit involved a climb of 7.9km at an average gradient of 5.9%, reaching 10% in some places. It started from the outskirts of Innsbruck through Aldrans and Lans towards Igls. After a short stretch of flat roads, the race descended through Igls back towards Innsbruck for 47.6km.

“The first 5km were okay, but when we hit the climb, the real racing started,” says Nigrini. “At first, I was able to sort of stick with Van Engelen and Luijks, but they ended up being the stronger riders. They opened a gap on me, but I was able to chase them down on the flat section. We then stayed together on the final climb where, again, they were too strong.

“Having my family around to support me while I was racing was like having a team radio,” Nigrini adds. “They followed the race on YouTube, which enabled them to feed me with all kinds of useful information.”

Nigrini is currently involved in the Support SA Talent’s virtual road cycling series, where he is 10th overall in the points competition and third overall on time. 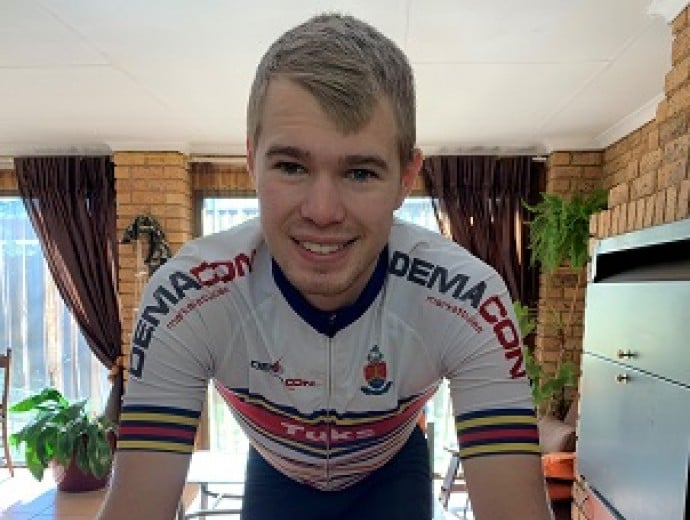