The rapid spread of the highly contagious COVID-19 virus has prompted several countries to announce a national lockdown in an attempt to “flatten the curve” and curb the impact of the virus.

During this challenging time, many seem to oscillate between engaging the idea of a pandemic (sales of The Plague by Albert Camus have skyrocketed) or indulging in escapism (this includes a mobile real-time strategy game) as a way to avoid the sustained domination of coronavirus-related content in their visual and social media.

However, there is no escaping coronavirus-related content, when even the place you once bought a biscuit at emails you to remind you to wash your hands!

When it comes to movie habits during self-isolation, there is of course a difference between consuming content in order to pass time or provide comfort viewing, and watching films that can help us reflect on and come to terms with what self-isolation and its lack of haptic sociability entail. Popular entertainment guides were quick to publish lists about the former. British magazine Empire, for instance, published a meta-list of various viewing recommendations for those in lockdown, while The Guardian published a selection of films “about self-isolation, to watch during self-isolation”.

Film scholarship on pandemics has understandably focused on HIV/Aids. For instance, Kylo-Patrick Hart’s book The Aids Movie: Representing a Pandemic in Film and Television (2013) explores the depiction and representation of HIV/Aids in popular fiction media. In a South African context, Rebecca Hodes’ 2007 study on the representation of HIV/Aids in non-fiction film notes that “Western filmmakers harnessed the documentary format in order to foster awareness and challenge misinformation about the disease”. Though these real-life pandemic films – think also of Roger Spottiswoode’s fictional movie And the Band Played On (1993) – do not make the popular viewing lists, which tend to be dominated by more traditional cinematic tropes and conventions of horror and science fiction.

These popular viewing lists tend to be dominated by more traditional cinematic tropes and conventions of horror and science fiction. Science fiction has long been the breeding ground for apocalyptic and post-apocalyptic visions that depict psycho-social collapse and economic disintegration. The zombie film remains a touchstone of pandemic films. Often a chemical disaster, plague, virus or the like turns people into flesh-eating zombies. Through biting and sometimes touch, zombies pass on the infection as more and more succumb first to death, then to its ravenous aftermath.

In the Will Smith film I am Legend (2007), Smith’s character seems to be the last man alive in New York City after a plague swept the earth and turned most other humans into zombie-vampire mutants. In the adaptation of Max Brooks’ novel World War Z (2013), a zombie virus outbreak brings the world to a halt while scientists seek a cure. In discussing zombie containment measures in World War Z, anthropologist Christos Lynteris describes how the film anticipates the necessity of social containment and self-isolation. Indeed, in their article on zombie cinema, risk, anxiety and pandemics, Robert Wonser and David Boyns conclude that “zombie cinema is uniquely suited for the task of revealing important, sociological aspects of society because it highlights collective anxieties about social life in the contemporary world in graphic fashion”.

While zombie movies and other kinds of post-apocalyptic imaginings make for popular viewing, COVID-19 has directed our attention to many other films and series that directly and more scientifically deal with diseases, vulnerability and pandemics. As such, since the coronavirus entered popular discourse, several science-based titles keep appearing on to-watch lists during lockdown.

On Netflix, the documentary series Pandemic (2020) has proven exceedingly popular as viewers try to make sense of a changed world. National Geographic’s The Hot Zone (2019) is a fictionalised version of Richard Preston’s book about a terrifying Ebola outbreak. The 90s science-thriller Outbreak (1995) also bases its arguably slick narrative tension on the consequences of an Ebola outbreak in the United States and the military’s intervention in this looming disaster. Steven Soderbergh’s critically acclaimed ensemble drama Contagion (2011) addresses the rise of a virus and the global social panic that accompanies its spread. This film’s newfound fame has predictably resulted in those most tiresome of pandemic activities to pass the time: Contagion cast members giving advice on avoiding COVID-19 and entertaining yet superfluous think-pieces about how the film “predicted” the current pandemic.

Watching movies and series about a pandemic while you’re in the midst of one is one thing, but finding a way to deal with self-isolation and social distancing is another. In addition, there are facets of diseases, viruses and pandemics that many movies and series address (if at all) only in a sidelong fashion. Growing up in the 1980s, I was spellbound by the science fiction thriller Warning Sign (1985) directed by Hal Barwood, which imagined the virus as a highly effective biological weapon. In 1987, Jack Sholder’s horrifying The Hidden exploited fears around contagion and infection in the form of an alien slug-like parasite that takes over people’s and animals’ bodies and forces them to act according to its will.

Echoing the concerns of body horror, both films focus on how receptive the human body is for invasion and how no one is to be trusted unless their identity – their fixed point of safety in a time of heightened risk and danger – has been established. You can trust someone only if they are devoid of disease and not inhabited by a parasite. For a cinematic exploration of paranoia in a confined space, you can do little better than John Carpenter’s 1982 horror The Thing in which a parasitic alien occupies and discards human bodies in a research outpost in Antarctica. The film’s infamous blood test scene remains, as Megan Navarro describes it, “a masterclass of suspense that rivals the work of the King of Suspense himself, Alfred Hitchcock” as the viewer waits in anticipation to see which of the surviving characters have been occupied by the alien.

Why watch movies that confront us with body horror and visions of our mortality when our news feeds promise us live updates on COVID-19, and every ping on your phone delivers the latest confirmed infections?

The kind of cathartic viewing promised by horror, science fiction and even science-based movies (most of which end in humanity triumphing against the odds) needs to be complemented by viewing that approaches something spiritual, even transcendent. As Josephine Livingstone writes in the New Republic: “[The] coronavirus disaster is messing with the boundary between fantasy and reality, leaving us feeling somewhat fictional ourselves, adrift in the enormity of the crisis and the volume of surreal information before us. What pandemic cinema offers is not an escape, exactly, but a refreshing variety of ways to frame or process that information.”

Disasters we’ve seen play out on screen many times have passed into our daily consciousness and our hypervigilance about COVID-19, its impact and consequences. While the viewing options mentioned have commendable escapist qualities and provide quality entertainment, we can also turn to more meditative viewing that is not about a pandemic per se but about a world-ending event that offers viewers ways to frame and process information about the event.

In Lars von Trier’s Melancholia (2011), it is Justine (Kirsten Dunst) and Michael’s (Alexander Skarsgård) wedding day, and Justine’s sister, Claire, and her millionaire husband are hosting the reception in a country mansion. As the film unfolds, it emerges that Justine struggles with her mental health. Meanwhile, it is clear from news reports that a rogue planet, Melancholia, is on a collision course with Earth and set to wipe out humanity. The film avoids the macro-view of similar disaster films (remember Deep Impact and Armageddon from the ’90s?) to instead focus on how a small number of characters cope with the upcoming end of the world. Claire, always the calm and rational sister, begins to unravel; Justine gains strength. The film opens is overall devoid of the mass hysteria that usually accompanies a film about the end of the world.

For all its apocalyptic inevitability, Melancholia is a serene viewing experience of familial immediacy and aesthetic beauty; Von Trier’s selective use of slow-motion immerses the viewer in the film’s emotional landscapes while avoiding emotional exploitation. (To be clear, many critics disagree on this point: The Guardian’s Peter Bradshaw called it “an instrument of torture”.) In its contemplative quietness and surrender to the inevitable, Melancholia did not “predict” anything, nor is it a Viewer’s Guide to Coping with COVID-19, nor does it provide “answers” to the problems of the present. The film confronts us with our fear of obliteration and compels us to come to terms with it in a time of global crisis, uncertainty and self-isolation.

Perhaps there is a larger lesson in there for us all. 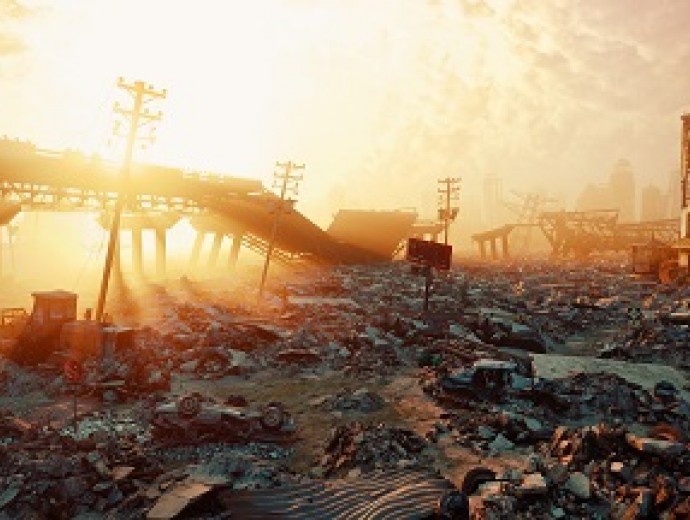