For learners at the University of Pretoria’s (UP) TuksSport High School, having big-match temperament is second nature – but excelling in their academic pursuits is equally essential. Therefore it was no surprise that the matric class of 2019 achieved a 100% pass rate. In the history of the school, there was only one year in which the matrics failed to do so.

The school's principal, Hettie de Villiers, never tires of emphasising that any sports career, no matter how good the athlete is, can last only a few years. She added that in sport, there are never any guarantees. Any career can end at any time due to an injury. "Then what? That is why any athlete needs to have a good academic qualification to fall back on," De Villiers explained.

The teachers at TuksSport High School agree with her viewpoint. That is why they are prepared to go the proverbial extra mile to help learners.

TuksSport High School’s matriculants are grateful for the support they received. Some of them say this support made it possible to compete internationally for long periods without falling behind in their schoolwork.

James Freeman, who is one of Botswana's rising swimming stars, obtained three distinctions, making him one of TuksSport High School's top matriculants.

He admits he needed to keep his wits about him to ensure he made the most of every minute of every day. On most school days he trained for up to four hours, and also had to find the time and energy to study. But Freeman relished the challenge. "Somehow, last year turned out to be my best as a student."

It was also an excellent year for him as a swimmer. Freeman made Botswana sports history by becoming his country’s first swimmer to officially qualify to represent his country at the Olympics. In the past swimmers from Botswana only got to compete at the Games through invitation.

He set an Olympic B-qualifier time in the 400m freestyle swimming (8 minutes and 53 seconds), and is hoping to also do so in the 800m freestyle. His best time of 8:09 is mere hundredths of a second slower than the B-qualifying standard.

Freeman hopes he gets the opportunity to compete at the Tokyo Games, but he is also realistic.

"The decision of whether I get to compete is out of my hands. It will be a great learning experience if I get to go to get a feel of what the Games are about. My real focus is the 2024 Olympic Games."

Christin Mundell is another learner who seemed equally motivated to excel as a student and as a swimmer. She earned two distinctions. During the African Games in Rabat, Mundell won three silver medals (50m, 100m and 200m breaststroke). She was also part of the 4x200m relay team that won gold.

TuksSport High School's head boy, Sammy Ngoveni, also acquitted himself well during the matric exams. When not studying, he was challenging the stopwatch in the sprints. His current best time over 100 metres is 10.50s, and in the 200 metres it is 21.70s. A definite highlight for him was winning gold at the South African Junior Championships in the 4x100m relay. 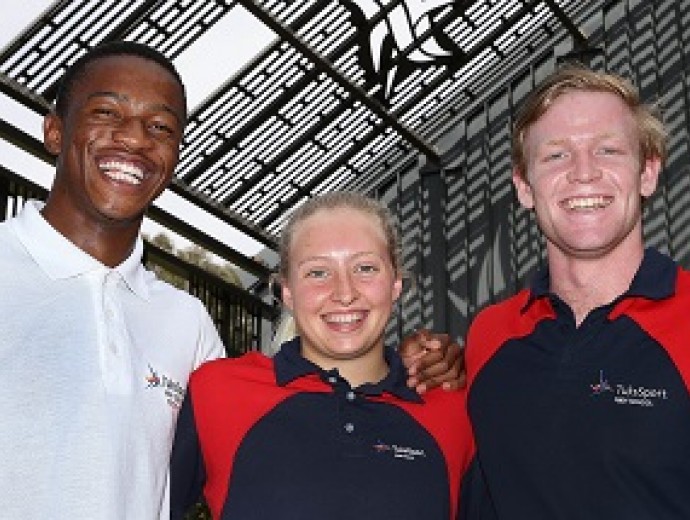