COMMENT: Captain Marvel can teach us a lot about women’s role in decision-making, says UP professor

Superhero movies attract increasing attention from viewers of all ages. Recent ones such as Black Panther triggered discussions on current societal challenges. The most recent example is that of Captain Marvel – the first movie of the Avengers series with a female protagonist. Although female heroes are not entirely missing from other movies in the series, in this one the movie’s focal character is Captain Marvel and how she discovers her power, her role in a war, and her new-found responsibility to save the world (as with any other superhero, of course).

But how are we doing in the real world when it comes to real-life Captain Marvels?

In the movie, Captain Marvel is abducted after an accident. Her unique powers were hidden from her, to be used only for the benefit of her captors. Real-life Captain Marvels seem to be underutilised globally, firstly within the labour force, but even more so as leaders in strategic positions; their true potential is locked too. A study published in 2018 by Catalyst looked at women in the C-suite (executive positions CEO, CFO, COO, etc.) in Standard and Poor 500 companies. It paints a dismal picture for Captain Marvels, or in other words female game-changers, globally. Women made up just 5% of Fortune 500 CEOs – not only an extremely low share, but a decrease from 2017. Women hold only 10% of top management positions in 1 500 S&P companies, and 19% of overall board seats. The potential of women is locked behind historical norms, perceptions and background.

Unleashing the power of real-life Captain Marvels can provide new sources of powers and strengths in the global fight against the world’s problems. Unique and innovative solutions to these problems require multiple perspectives in decision-making, which can be sourced, among others, from gender inclusivity. An example of this is provided by the University of Exeter’s Professor Catherine Mitchell, who in a 2018 interview discussed how low gender diversity in the past has made the energy industry less open to new ideas, and maybe even more reluctant to move to lower-carbon energy systems, and even slowing down the energy transition.

Captain Marvel is rebuked by her trainers and fellow soldiers for allowing her emotions to guide her decision-making process. She only realises her full potential when she understands that her approach to leadership is not wrong, it is just different. Does this mean that real-life Captain Marvels have to fight against everyone they meet? In the climactic battle, alien villain Yon-Rogg tempts her to fight him, but she refuses. Captain Marvel argues that she has nothing to prove to anyone. That is a message to real-life Captain Marvels: that even though current leaders will prompt you to fight and lose your energy, you should be assertive about contribution and loyalty to the common goal of moving towards a better future – it is not about who is going to achieve it.

Captain Marvel teaches us the value of a good team – a key concept in leadership. Are Captain Marvels completely independent? What assistance do real Captain Marvels have, and what are the potential catalysts for change? One of the greatest challenges of our society is how to reach, inspire and prepare young future Captain Marvels.

This can be done by promoting strong role models through mentoring, and by speaking to something very important for young female professionals: their pride. We do not want to be chosen because we are women ONLY – but we do not want to be rejected because of that, either. Initiatives such as the Future Africa Institute at the University of Pretoria, and the Africa Science Leadership Programme, which promote a polyphony in decision-making while also nurturing a variety of approaches in leadership and enabling gender inclusivity, are necessary for future change.

And, as Captain Marvel promises at the end of the movie, women in decision-making positions have the potential to make a difference towards ensuring a sustainable future for our planet.

This article first appeared on the South African Young Academy of Science blog. 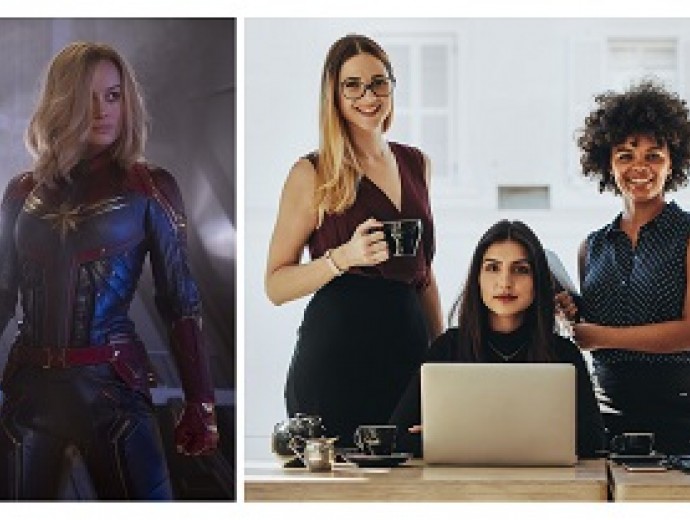