‘Farewell to my boss, line manager, but not to my friend’

What began as a dream for a 17-year-old Grade 11 pupil in the village of Kikwit Sacré-Coeur, Democratic Republic of Congo, has culminated in an illustrious career that he could only dream of.

Professor Jean Lubuma retired from his position as Dean of the Faculty of Natural and Agricultural Sciences (NAS) at the end of September 2019. Being a Dean is something, he said, he had never dreamt would ever happen.

“When I was young, I wanted to be a maths teacher. My father was one of my inspirations being himself a primary school teacher, and I had an amazing teacher of maths in high school from Grade 11. By the end of my high school career, everyone knew that I would be a teacher of mathematics,” Prof Lubuma said. The plan however changed slightly. His formal admission to the University of Kinshasa saw him land in the Bachelor of Engineering programme, as opposed to mathematics.

“I refused to attend Engineering lectures and went straight to attend lectures of the Bachelor of Mathematics programme in the Science Faculty for about five months, without being registered there. Then, we had to write mid-term tests that would determine whether we stayed in these courses or not. I wrote the Analysis and Algebra tests and got 90% for each of them. It was at this point that I realised, after a little encouragement from a friend, that I needed to sort out the issue of registration,” Prof Lubuma said.

He ended up standing in the office of the registrar, asking to be transferred from Engineering to Mathematics, something that was unheard of, especially because everyone else was moving in the opposite direction.

“He told me it would be incredibly simple for him to sign and allow me to make that change. He just had a warning for me, that I was making this change at my own risk. I had never heard this phrase he used before. After learning what it meant, it fuelled me to work hard for my dream. I haven’t looked back since,” he said.

Prof Lubuma also learned in this period of his life that there were teachers at university too. It’s what kept him in academia and his dream alive. Prof Lubuma will stay on as Emeritus Professor in the Department of Mathematics and Applied Mathematics in a post-retirement role.

At the helm of the NAS Faculty at the University of Pretoria (UP), Prof Lubuma had set three main priorities, namely: to push the agenda of transformation within the Faculty; to strengthen and sustain the Faculty’s academic profile and research output; and to most importantly, foster a relationship among all the stakeholders of the Faculty (academic staff, support staff, students and management).

When quizzed on whether or not he achieved these goals, Prof Lubuma said: “I would like to believe I did. Let me begin by acknowledging that there have been many challenges during my deanship. Despite that, the faculty has done very well and has strengthened its position as a key contributor to UP’s Strategic Vision 2025. Some of our achievements include: in four years [from 2015 when I took up the position], the number of doctoral graduates has increased by 77% to reach, in 2019, the unprecedented output of 115 doctoral graduates; the Faculty counts 194 NRF-rated researchers, which represents 38% of the total number of rated scientists at UP. NAS has seven A-rated and three P-rated scientists, and through the NAS Transformation Desk, our strategy for Heads of Departments and Directors to be transformed leaders has paid off. The percentage of black academic staff in the Faculty increased significantly from 25% in 2014 to 31% in 2019,” Prof Lubuma explained.

His desire to foster relationships and be closer to people has led to him developing friendships with different people within his Faculty. From cleaners right up to directors and heads of departments. As a testament to this, NAS Deputy Dean Prof Marietjie Potgieter described him at his farewell party as her boss, line manager but also her friend. “I know a man who has displayed enormous resilience and perseverance to stay the course, up to the last day of service as Dean and even beyond. Today I say farewell to my boss, line manager but not to my friend. Thank you Jean, for four of the most rewarding years of my professional life. You are an inspiration!” Prof Potgieter said.

During his deanship, some of the things that Prof Lubuma enjoyed – the family man and devout Christian – suffered. This is something he said he would rectify now that he has more time on his hands. “I am a fan of sports such as football, rugby and tennis, so it means I will have more time to enjoy these things. I also used to sing for the church choir, this is something I also want to start thinking about again. I am particularly looking forward to spending Sundays listening to Classic FM again, this is something I enjoyed very much,” he said.

Prof Lubuma will stay on as Emeritus Professor in the Department of Mathematics and Applied Mathematics, in a post-retirement role. A role that he said is the cherry on top of what has been a beautiful career. 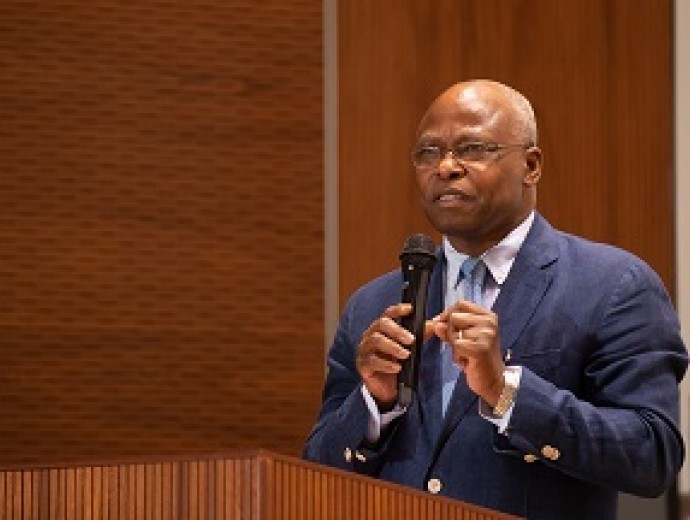