UP and French researchers intensify malaria research programme in Limpopo

Approximately half of the world's population is at risk of contracting malaria, but 90% of malaria cases and deaths occur in Sub-Saharan Africa. Around 78% of these deaths occur among children under the age of five.

With these numbers in mind, the University of Pretoria Institute for Sustainable Malaria Control (UP ISMC) is contributing towards malaria elimination in the country through research and awareness projects. A group of researchers from UP ISMC and Aix-Marseille University, France, recently visited two villages in the Limpopo River Valley (LRV) region, in the Vhembe District of Limpopo, to research the human behaviour contribution towards the high incidence of malaria in the region.

About 1 000 community members will benefit from the cutting-edge research that aims to ultimately solve the problem of malaria in the area. Professor Riana Bornman, one of the lead researchers in the LRV region, said a “knowledge, attitude and practice (KAP) survey is being done in the two villages that appear to have the highest malaria case numbers in the area”.

In order to ensure accurate and useful results, researchers often use the services of local, mostly female, VhaVenda community members who have been trained to collect quality data through the use of questionnaires as part of KAP surveys.  This overcomes language barrier issues and makes locals more comfortable with the process of the research. A VhaVenda field assistant doing an interview (KAP survey) with a participant from one of the villages that are part of  the new study.

This project is one of several in the Remote Sensing for Malaria Control in Africa (ReSMaCA) programme that UP ISMC and the Aix-Marseille University researchers are involved in.

The team has been making trips to the LRV region since 2016. The programme is dedicated to researching sustainable, safer and innovative ways to help combat the disease, explained Dr Taneshka Kruger, Project Manager of the UP ISMC. She said malaria was prevalent in the northeastern parts of Limpopo, Mpumalanga and KwaZulu-Natal, “close to the borders with our neighbouring countries”.

“Limpopo has the highest incidence, specifically in the LRV region of Vhembe. Regardless of the high incidence, there is very limited data about malaria in the area and many unknowns exist that need to be answered [in connection with] why the prevalence is so high.”

According to Professor Tiaan de Jager, UP ISMC’s Director, the aim of the ReSMaCA programme is to develop an understanding, through research, of why the LRV region has a high incidence of malaria. “We suspect a lot of factors are involved in the high malaria incidence in the area and we have anecdotal evidence of the social and environmental contribution. However, a systematic assessment of these factors must occur and that is what we aim to do by using satellite technology.”

An important tool in the programme is the use of satellite technology. According to Prof De Jager, remote sensing forms a major part of the research. “The French National Space Agency is involved and we value the partnership to assist us to reach the malaria elimination target by 2023,” he said.

Meanwhile, Professor Jean Gaudart, Biostatistician and Public Health Specialist at Aix-Marseille University, said: “Mosquitoes breed in water and require vegetation to survive. So when we see vegetation using remote sensing technology, it will guide us to find the hotspots – the most at-risk areas for malaria.” He is also a co-supervisor on the new study focusing on the two villages, which will make use of remote sensing to determine some of these factors.

Prof De Jager said the main challenge of any project was consistent funding. “It takes money to do research and in the case of the ReSMaCA programme, most of the projects take place in the field in Vhembe District, which means travelling and accommodation expenses, and this really adds up. Other challenges include the language barrier, and building and keeping trust between us and the community.”

He expressed gratitude for the support the collaboration has received and hoped the project would contribute towards the overall goals of ResMaCA.

“Aix Marseille University and the French Research Institute for Development (IRD) have been very supportive from the start towards this collaboration. We hope to be able to identify malaria hotspots, develop early warning systems and design effective control strategies in the area.” 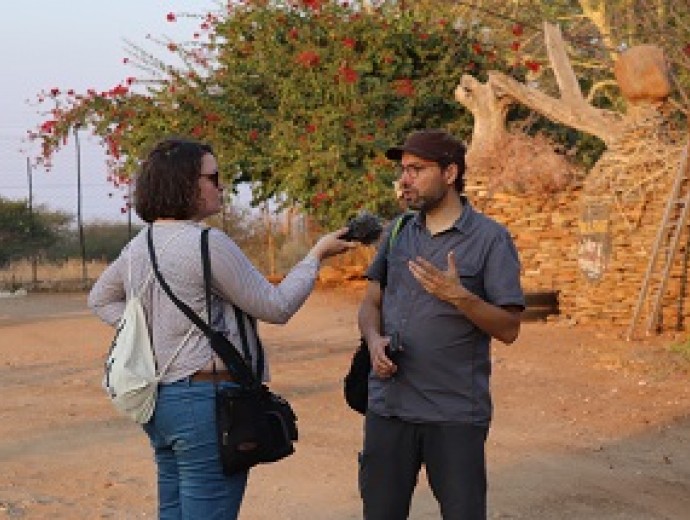 Aix-Marseille University’s Prof Jean Gaudart being interviewed by Claire Bargeles, an RFI correspondent, in one of the villages.