From the skull of an ostrich to the lungs of a dog, no animal body part goes to waste at UP’s Plastination Unit

The Plastination Unit in the Department of Anatomy and Physiology at the University of Pretoria’s Faculty of Veterinary Science has created more than 200 plastinated specimens since it became operational in 2017. Louise de Bruin spoke to unit head Wilma Olivier.

LDB: What is plastination?

WO: Plastination is a technique used in anatomy to preserve bodies or body parts, but really, it is so much more than that. It gives anatomy students the means to see inside an animal’s body, discovering the finest detail – even of the chambers of the heart.

The technique of plastination replaces the body’s water and fats with certain plastics. Plastinated specimens serve as valuable teaching and instrumental agents because they retain most properties of the original sample. While still fairly new in the anatomy teaching sector, plastination is of great value to students and reports show that modern laboratories across the world are choosing plastinated specimens over the older formaldehyde-preserved specimens for teaching purposes. LDB: Apart from universities using plastinated species for teaching purposes, where else is plastination needed?

WO: Currently, plastinated specimens are used when groups come to view our facilities and specimens since they are much more viewer-friendly and we get very good feedback.  Students typically only see material that is distorted or preserved in bottles (preserved in a formalin mixture). Plastinated material, however, can be handled and looked at closely. Veterinarians and medical practitioners can use plastinated material in their practices if they want to demonstrate something of importance to an owner or a patient. Plastination can also be used in research where very thin slices can be made and used under the microscope.

LDB: Is it a difficult process?

WO: This process cannot be rushed. You must ensure the body part or organ cures properly. From the skull of an ostrich, to the lungs of a dog and the heart of a cow, every animal is so unique and has its own challenges. But just about every one of these challenges has been overcome successfully.

Producing one plastinated specimen is, however, no easy task and requires painstaking patience, taking up to six months to reach the final result. There are several intricate stages in this production process. First, all the blood, water and fat need to be removed from the body part/organ. Cells that typically contain a lot of these substances need to be replaced with a curable polymer (a type of plastic). The third step dehydrates the specimen, using the dehydrating liquid acetone. Bovine and ovine (sheep) specimens are typically very fatty, which makes this a vital step for degreasing all specimens. The specimen must soak in acetone for several weeks to ensure all the water and fat are removed. Once this is complete, the specimen undergoes a silicone process, before the final stage of curing (hardening). This is a very long process, but we have had exceptional results. Plastinated digestive tract of a chicken

LDB: How is your unit different to others across the world?

WO: Unlike other plastination units across the world that use [only certain] parts of a body, the Onderstepoort Plastination Unit doesn’t allow anything to be wasted. In most of the cases the organs are used for plastination and the skeleton will be preserved to build a model for teaching purposes.

The technique of plastination was invented in 1977 by German anatomist Gunther von Hagens who also made it popular among the general public in recent years with the international tour, Body Worlds. This exhibition has been to South Africa on two occasions. As the demand for these specimens is increasing, so does the technique improve.

We’ve had to master the art of working with even the most delicate specimens, such as the organs and intestines of a chicken, compared to bigger more workable bovine or equine specimens.

LDB: Do you assist other institutions or universities with this service?

WO: We have completed a very big assignment for the Department of Animal and Wildlife Sciences and are currently busy with an assignment for the Equine Clinic Ambulatory Unit. Potential clients are veterinarians in practice who want certain organs or specimens plastinated in order to describe something specific to an owner of an animal patient. While most of the specimens already produced have found their new home in the Faculty of Veterinary Science’s museum, which is located in the Department of Anatomy and Physiology, the intention is to sell specimens to other educational institutions such as schools, technicons, colleges and universities which have agricultural institutions/departments. We may even start to sell to universities abroad, it all depends on the availability of specimens.

LDB: For how long can these plastinated animal body parts be used by vet science students?

WO:  If these plastinated specimens are handled with care, they can last for many years.  For that reason we give our clients the option to put their specimen in an enclosed container. This will better protect the specimen, while giving the client the option to remove it from the container. This assists with the storage of the plastinated specimen, while it remains accessible to users. The plastinated lungs of a sheep

LDB: Where to from here?

Not many people have ever even heard of plastination. To see some of these incredible specimens, visit the Faculty of Veterinary Science’s museum at the Onderstepoort Campus. 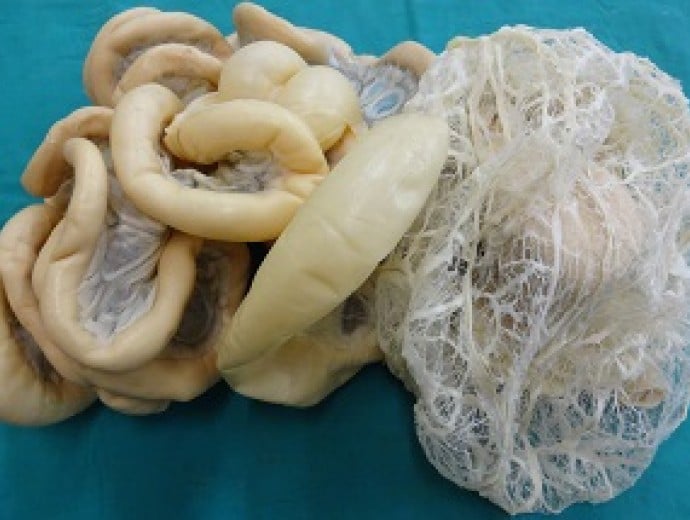 The intestines and stomach of a dog