The Ernst & Young (EY) Young Tax Professional of the Year (YTPY) is a global competition open to students from universities internationally and is mainly directed at finding future tax leaders. The first leg of the competition runs in the specific countries, where (after a series of exercises) a winner is ultimately chosen to represent his or her country and compete against winners from other countries on a global stage.  On 5 September 2019, the South African leg of the competition was held at the EY offices in Sandton.
Prior to the competition date, students from various universities were invited to complete an assessment prepared by EY in the format of an examination, and 20 top performers were selected as potential YTPY winners. Nine out of the 20 students who were invited to showcase their skills at the EY offices in Sandton were from the University of Pretoria. These students were then required to perform various activities and assessed on their performance in group activities and individual presentation. From this exercise, the top 8 students were selected as the finalists for the competition. Five out of the 8 students that was selected represented UP.
After presenting their personal statements to a panel of EY partners and lecturers from various universities, the top 3 and winner of the YTPY were selected.  In the top 3 were Melandri Wiese, Cheyleen Rugan and Tayla Swartz, all honours in Taxation students at the University of Pretoria. After much deliberation and discussions between the partners and lecturers, Cheyleen Rugan was selected as a 2019 winner of the Young Tax Professional of the Year competition. Cheyleen will represent South Africa at the global competition in Amsterdam in November 2019. The University of Pretoria is proud of yet another prestigious achievement in the EY YTPY.
Johan Small, Benjamin Mbana and Karl Frenzel are UP alumni that have also won the South African YTPY competition. Benjamin Mbana and Karl Frenzel won both the South African and the international competitions in 2014 and 2016 respectively. 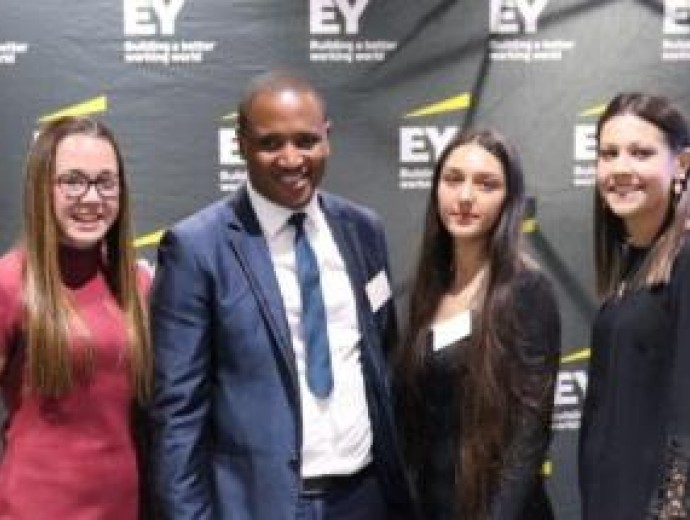