Dr T delights UP staff with talk on sex, sexuality and sexual health at book launch

The wave of the #pleasurerevolution reached the University of Pretoria’s Hatfield Campus recently when celebrated medical professional and television personality Dr Tlaleng Mofokeng launched her book, Dr T: A Guide to Sexual Health and Pleasure.

Dr Mofokeng, affectionately known as Dr T, spent an afternoon in the company of a diverse, mostly female audience discussing the ins and outs of sex, sexuality and sexual health. The session was hosted by the University’s Centre for Sexualities, Aids and Gender (CSA&G) and was moderated by Bettina Buabeng-Baidoo, a fifth-year Health Sciences student, and Refiloe Mofokeng, who is in her final year, LLB.

Johan Maritz, Senior Manager for New Business Development & Special Projects at the CSA&G, gave the opening remarks to what would be two hours of fervent nods, laughs and sharing of information.

The conversation was divided along similar lines as the book: the first half focusing on sexual health and the second part looking at sexual pleasure. The floor was  opened for questions for a few minutes after the discussion to hear the thoughts of readers. Explaining how the book came about, Dr T said it was something she has always been thinking about. “I always knew I would write a book, but the timing was important. I wanted to write a book when people were familiar with my voice, with what I was about because I wanted the book to be an extension of my advocacy and activism. I felt that it would be easier once I’d laid the foundation,” she said.

The writing style was modelled on who she is. “That’s how I conversate about sex with people. It couldn’t have been any other way and I think that’s why it was so quick for me to write it because I wasn’t doing something that was foreign to me or that I wasn’t already doing. It took about nine months to write it, and I wasn’t overthinking things,” Dr T added.

The book’s authenticity comes from the voice it is written in – it has strong elements of who Dr T is as an individual, using her own experiences to make specific points.

Another topic that came up was the representation of menstruation in mainstream media. Dr T, with her infectious laugh and easy manner, challenged the audience on the existence of “blue blood”.  She used the example of sanitary pad-producing companies using blue gel, as opposed to red gel, to illustrate blood to show off the efficiency of their products. She highlighted this misrepresentation as equivalent to erasure.

Members of the UP community not only engaged Dr T on the subject matter at hand, but also took the discussion a step further, requesting her advice on issues that they intend to correct in their own communities.

Dr T: A Guide to Sexual Health and Pleasure is available for purchase at all reputable bookstores and online. 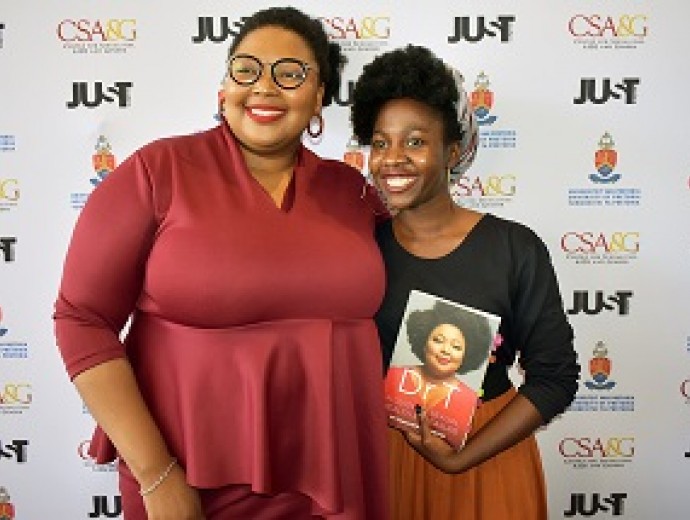 Dr Tlaleng Mofokeng with Bettina Buabeng-Baidoo and a copy of her book.