UP vets perform extractive tusk surgery on elephant in Poland

Two University of Pretoria (UP) veterinarians saved the life of a 5.5-ton elephant at Poznan Zoo in Poland, by performing a surgical extraction of his damaged tusk.

Ninio, an African elephant, suffered a severe infection in July after a crack appeared at the bottom of his right tusk.

Professor Gerhard Steenkamp, who teaches courses in dentistry and maxillofacial surgery of animals at UP’s Faculty of Veterinary Science and Professor Adrian Tordiffe – a veterinary wildlife specialist – performed the five-hour surgery on Ninio. Having vast experience in elephant anesthesia and dentistry, Profs Tordiffe and Steenkamp first treated Ninio at Poznan Zoo in 2012 and 2013 when they extracted his left tusk.

In 2015 they returned to Poland because Ninio had damaged his right tusk. “Fortunately, it was not severely infected and Gerhard was able to do a partial pulpectomy, removing part of the damaged pulp and sealing the tusk with a hard nylon plug. This worked well until a crack was noticed on the bottom edge of this remaining tusk in July this year.”

The vets flew almost 33 hours last week to perform the surgery. “I immobilised Ninio with a  powerful drug called etorphine that I needed special permission to carry with me to Poland as its use is highly controlled, and it is currently not available in that country. Ninio went down as expected, but his legs were rotated toward the wrong side so we had to push him over onto his right side,” explained Prof Tordiffe. Fortunately, the zoo had installed an 8-ton crane onto the roof of Ninio’s night quarters, and the team turned him over onto his left side so that Prof Steenkamp could comfortably work on his right tusk. Prof Tordiffe then administered a combination of intravenous drugs to Ninio to keep him asleep and to minimise the pain. “Gerhard soon confirmed that the tusk was severely infected and that extracting it was the only option.”

The tusk was massive with an outer circumference of 53cm at the level of the lip. Ninio seemed to be sensitive to the intravenous anaesthetic drugs and his breathing became shallow, said Prof Tordiffe. “I placed an endotracheal tube and was able to ventilate him for about 30 minutes until his breathing improved. Gerhard was able to extract the main part of the tusk quite quickly, but then struggled to remove some very hard pieces of abnormal ivory that had formed deep in the tusk socket because of the infection. Using a massive drill, he tried to break up these pieces of hard ivory.”

After five hours of anaesthesia and backbreaking surgery, Prof Steenkamp decided that enough of the diseased ivory had been removed to allow for the empty socket to heal. “We gave Ninio the antidotes to the anaesthetic drugs and the team helped to push him onto his chest so that he could get back onto his feet,” said Prof Tordiffe.

Ninio was stable on his feet after the surgery and was moving normally, but he was not eating or drinking well and appeared to be in some pain. “After we managed to get a second dose of painkillers into him, hidden in a juicy watermelon, he started eating and drinking again and by the time we left (48 hours after the surgery) he was almost back to his normal self.”

There are a few veterinary teams in the world that are capable of doing this kind of surgery and Prof Tordiffe believes that he and Prof Steenkamp have more experience than anyone else. Prof Gerhard Steenkamp works on removing parts of the tusk

Prof Steenkamp has perfected the general extraction technique, but there are still aspects that they are hoping to improve on, said Prof Tordiffe. “We need to create better instruments to break up the hard ivory pearls that often form in these cases and we need to find drug combinations that are more effective at reducing the post-operative pain. Each case seems to present us with unique challenges, but the more we do, the more we are able to test and modify new ideas to ensure a more successful outcome for the animal.”

Last year they successfully extracted the tusk of an Asian elephant at Tbilisi Zoo in Georgia. That procedure was filmed by the BBC for their Big Animal Surgery series, which will be aired in South Africa on DStv Channel 184 (BBC Earth) on Monday 9 September at 19:00. To view the video of the surgery, click on the link https://youtu.be/IZqE2qgtLsI 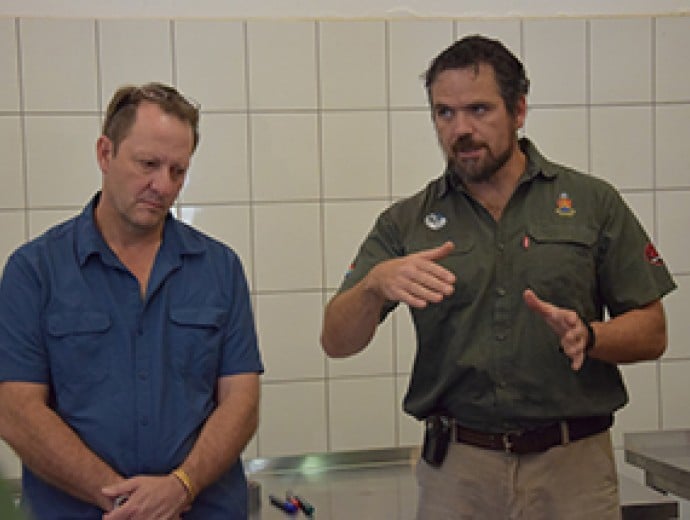