Six new ways that UP is fighting malaria in 2019

From insect-repelling socks to potential new drugs from local plants, the University of Pretoria Institute for Sustainable Malaria Control (UP ISMC) is turning up the heat on the deadly disease this World Malaria Day.

Malaria is a constant scourge in the northeastern parts of our country and further north into Africa. Caused by the Plasmodium parasite and carried by blood-sucking mosquitoes, malaria is a particular threat in Africa: 93% of malaria deaths in 2017 occurred on this continent alone.

The UP ISMC aims to help prevent and eliminate malaria in South Africa by 2030, in line with the UN’s Sustainable Development Goals. The institute takes a multipronged approach to malaria elimination and control: treating the parasite, stopping the mosquito, and understanding and managing the health of threatened populations. Here are just a few of the things that UP ISMC researchers are doing to help. Malaria-carrying mosquitoes tend to bite ankles and feet, so Dr Mthokozisi Sibanda has come up with an ingenious plan: socks with built-in repellant. He has created a thread that holds a common insect repellant and releases it very slowly over time, and used this to knit socks. These socks can be washed without losing their effectiveness and may last for up to eight months. The socks are being marketed through his company African Applied Chemical.

Malaria treatments don’t always have to come out of multi-million dollar pharmaceutical companies or first-world research institutions. In fact, UP ISMC researchers are looking to homegrown indigenous knowledge for answers. They have found that extracts and specific compounds from African wormwood (also known as wilde als or Artimisia afra) can slow down both malaria symptoms and transmission of the disease. They will continue this research in the hope that they can discover new and more effective drugs.

Modern drug development is a hugely expensive and complex process. That’s why the UP ISMC is part of a multi-university collaboration that discovers, develops and tests promising new compounds for malaria treatment.

In fact, Prof Lyn-Marie Birkholtz of the UP ISMC heads up the South African Malaria Transmission-blocking Consortium, which focuses on drugs that target more than one stage of the parasite’s life cycle, to treat the disease while also stopping transmission to other people.

Stopping malaria in its tracks isn’t just about killing mosquitoes or developing expensive new drugs. Community education plays a vital role as well. “We’re taking an integrated approach of health promotion and education to get our message across,” says Prof Tiaan de Jager, Director of the UP ISMC. “We’ve published a book called Sibo fights Malaria, we’re using dramatic performances in rural areas, and we’re using music as a way to talk with our communities.”

Our skin produces a wide range of chemicals called volatile organic compounds (VOCs) that mosquitoes can smell. UP researchers are hoping to use this in two different ways related to malaria. First, they hope to find VOCs that mosquitoes are attracted to, and use those chemicals in mosquito bait traps. Secondly, they hope to use the fact that people with malaria have a different VOC profile to those without, to create a quick and non-invasive test for malaria. This could help pick up malaria infections much earlier.

“Outdoor control of malaria is becoming more important, especially as we are moving towards integrated vector management and elimination,” says de Jager.

A recent Masters project at the UP ISMC has shown that treatments to stop ticks and other parasites in cattle can also kill mosquitoes, and severely limit their reproduction by reducing the larvae produced. This research is in its very early stages, but de Jager believes that it holds some potential for future mosquito control.

“This is an additional tool in our toolbox to reduce the number of malaria cases in South Africa.” 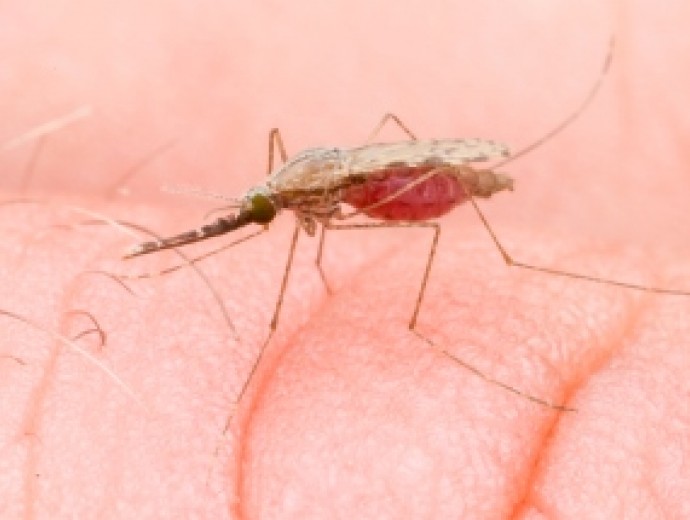