The University of Pretoria recently awarded an honorary doctorate to Elinor Sisulu, one of South Africa’s most eminent human rights activists and champions of children’s literature.

A journalist by profession, Sisulu has contributed to exposing injustices and strengthening human rights in many areas, but is perhaps best known for her activism around human rights abuses in her native Zimbabwe – in particular, her participation in the re-publication of the report Breaking the Silence: A Report on the Disturbances in Matabeleland and the Midlands in the book Gukurahundi (2007), and the role it played in drawing international attention to the ongoing human rights abuses in Zimbabwe.

On being granted the honour by UP, Sisulu – who is married to former Speaker of Parliament Max Sisulu, the son of late struggle icon Walter Sisulu – reflected on the timely nature of the doctorate. “Last year I celebrated my 60th birthday. At 60, you realise that the road behind you is longer than the one ahead: it is a time of reflection and interrogation on the successes and failures of life; it is a time when you realise that you have to drop some items from the bucket list. One of these was the PhD that I had intended to get at various points in my career but work always got in the way. I came to the conclusion that I was never cut out to be an academic, and abandoned the idea of a PhD. This accolade is therefore timely for me. I am truly grateful for the recognition of the work I have done over the years and I need no longer feel guilty about not having pursued the PhD.”

Three of Sisulu’s children – Shaka, Vuyisile and Duma – were present at the ceremony. “Duma and [youngest son] Sandile are proud UP graduates,” she said. “I recall their long hours of hard work and feel I am one up on them because here I am graduating without having had to undergo the endless reading and assignment writing!”

The honouree also had a few words for the graduates. “I wish you success and hope as you go forth into the world, and that you will always pursue knowledge with an open mind. The absence of curiosity spells the death of imagination. There has been much talk about putting up walls and closing borders. Sadly closing borders against others invariably means that borders will be closed against you. Tragically the physical borders all too often mirror the borders in the mind.”

Curiosity and imagination are the hallmarks of literature, a sphere in which Sisulu also claims a place. She is the author of the highly acclaimed biography Walter and Albertina Sisulu: In Our Lifetime, which received the Noma Award for Publishing in Africa and was runner-up for the Sunday Times Alan Paton Non-Fiction Award. Her children’s book The Day Gogo Went to Vote garnered several international awards and is a classic of South African children’s literature.

Sisulu has also tirelessly promoted children’s literature and a culture of reading among kids in South Africa, and has worked to make books more accessible to them. She was the chairperson of the Centre for the Book’s advisory committee (1997 to 2003), and the founder and director of the Puku Foundation, which is developing an online encyclopaedia for children’s books in all South African languages.

UP shares Sisulu’s passion for literature, and children’s literature in particular: the Faculty of Humanities’ research theme The Child and the Story focuses on instilling a culture of reading in children at a young age. The theme looks at more than simply improved reading fluency among children, but rather on the influence of narratives and larger issues, such as which languages they read in; the kinds of ideas being expressed in stories; how oral traditions feed into, or are excluded from, literary culture; how the narrative can address trauma; and how young readers respond to, reject or appropriate the narratives transmitted to them, among others.

“Elinor Sisulu’s work crosses several interdisciplinary fields rooted in the Humanities: gender and feminist theory, literary studies and biographical life writing, development economics as well as human rights, politics and sociology,” said Professor Vasu Reddy, Dean of the Faculty of Humanities. “She is regarded by many as one of the pioneering African feminist thinkers. Ultimately, we believe her work embodies what the eminent sociologist C Wright Mills referred to when he argued for the need for the sociological imagination to connect private troubles with public issues. Just as he was, in the words of [eminent American sociologist] Irving Horowitz, ‘committed to social change and angered by the oppression he saw around him’, so is Elinor Sisulu. The Faculty of Humanities is proud and honoured to bestow this tribute on Ms Sisulu for her contribution to South Africa.”

Sisulu expressed why UP’s recognition of her interdisciplinary approach is so significant. “I am deeply grateful to the University of Pretoria, especially former Vice-Chancellor Professor Cheryl de la Rey, Professor Vasu Reddy and Professors Debby Bonnin, Mary Crewe and Catherine Burns. I am also profoundly thankful to the late Professor Elaine Salo, who was the university’s director for Women and Gender Studies from 2009 to 2013. From the day I met her, Elaine showered me with love and affirmation. I feel that her spirit is with me today. Elaine was an acclaimed African feminist thinker whose towering intellect was combined with remarkable generosity, warmth and compassion.

“In her tribute to Elaine, the historian Terri Barnes writes about how Elaine struggled to find an intellectual home: ‘The disciplines were too straight and the interdisciplines were too crooked,’ Barnes said. “I faced the same struggle: when I was a master’s student at the Institute of Social Studies in the Netherlands, one of my assignments was to define development from the point of view of my discipline. I argued that the inter- and transdisciplinary nature of feminist theory made it impossible for me to analyse development through the lens of one single discipline. I failed the assignment and had to appeal to have it reviewed before I got the mark I deserved. I feel vindicated three decades later that the University of Pretoria has recognised the interdisciplinary nature of my work.”

Sisulu’s children also gave her a touching tribute. “It is such a tremendous privilege to witness our mother being honoured in such an illustrious fashion. We are deeply humbled to note that the many hours we’ve seen our mother hard at work have led to this moment. It inspires us, and renews our faith in the ethos of work, duty, conscientiousness and integrity that she has tried to instil in us.” 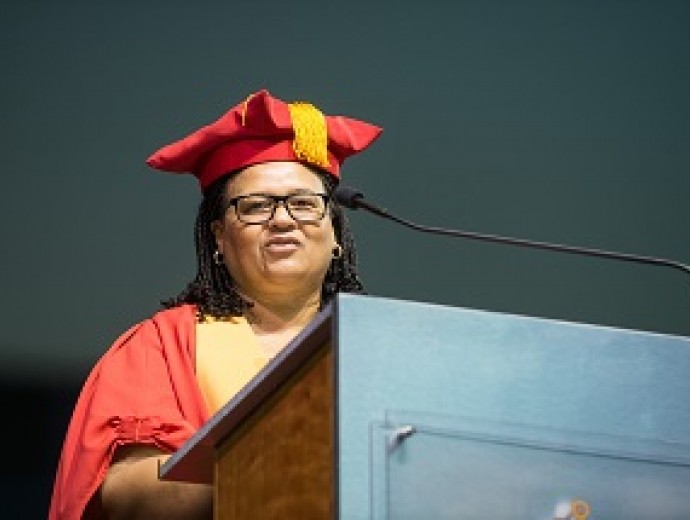