The event, at which degrees were awarded to students in human rights, commemorated 100 years since the birth of former President Nelson Mandela, and 70 years since the adoption of the Universal Declaration of Human Rights. It was also the last graduation ceremony presided over by UP’s outgoing Vice-Chancellor and Principal, Professor Cheryl de la Rey. The university announced on 21 November that Professor Tawana Kupe has been chosen to succeed Prof. De la Rey.

Justice Moseneke was awarded the honorary doctorate in recognition of his contribution to the legal profession. He retired in May 2016 after serving for more than 10 years as the Deputy Chief Justice of South Africa. He was a Justice of the Constitutional Court of South Africa since 2002, and before that a judge of the High Court in Pretoria. According to the Centre for Human Rights, “Justice Moseneke’s contribution to the legal profession has been immense. He attained the highest judicial office, and delivered erudite and courageous judgments. Apart from being a committed campaigner for human rights, he also has emerged as a South African with the highest level of integrity. These characteristics made him an ideal choice to head the recent inquiry into the death of more than 100 patients transferred from Life Esidimeni.” Former Deputy Chief Justice Dikgang Moseneke was awarded an honorary doctorate at the University of Pretoria’s Centre for Human Rights Graduation Ceremony on Friday. The event was the last graduation ceremony presided over by UP’s outgoing Vice-Chancellor and Principal, Professor Cheryl de la Rey. The university announced on 21 November that Professor Tawana Kupe has been chosen to succeed Prof. De la Rey.

In 1993, Justice Moseneke was appointed to serve on the technical committee that drafted the 1994 Interim Constitution for a democratic South Africa. In 1994 he was appointed deputy chairperson of the Independent Electoral Commission, which conducted the first democratic elections in South Africa. He has served on the boards of several community-based organisations and non-governmental organisations, including as Chairperson of the Nelson Mandela Children’s Fund. Justice Moseneke has long been closely associated with tertiary education. Until recently, he served as the Chancellor of the University of the Witwatersrand. He is a recipient of numerous awards of honour, including the Order of Luthuli in Gold – South Africa’s Highest National Award.

Justice Moseneke was not only born in Pretoria but spent much of his professional life in the city. Prof Frans Viljoen, Director of the Centre, said, “The University of Pretoria is therefore extremely proud to honour this son of its soil. Justice Moseneke’s life of integrity has been dedicated to the pursuit of human rights. Like few others, he symbolises the ability of the human spirit to overcome great adversity”.

In his speech, Justice Moseneke had some blunt words for fellow South Africans, saying the country “has become a lawless society in the midst of many excellent laws”. He made a firm call for South Africans from all walks of life – across government, business, and all sectors of our society – to build on and uphold respect for the rule of law.

The Centre for Human Rights also awarded degrees to students of the Master’s in Human Rights and Democratisation Africa-programme (HRDA). The centre is a pioneer in African human rights education, having established the HRDA in 2000 as the first-ever Africa-specific human rights master’s degree. This was the 19th HRDA graduation, with 27 students from 14 countries receiving degrees. There were eight distinctions, a repeat of last year’s record number. The programme is presented in partnership with 12 other universities across Africa, including Université d'Abomey-Calavi (Benin), Addis Ababa University (Ethiopia), and University of Lagos (Nigeria).

Five students who completed the centre’s master’s LLM/ MPhil programme in Multidisciplinary Human Rights, and nine doctoral students – six of them registered in the Centre for Human Rights – also graduated. 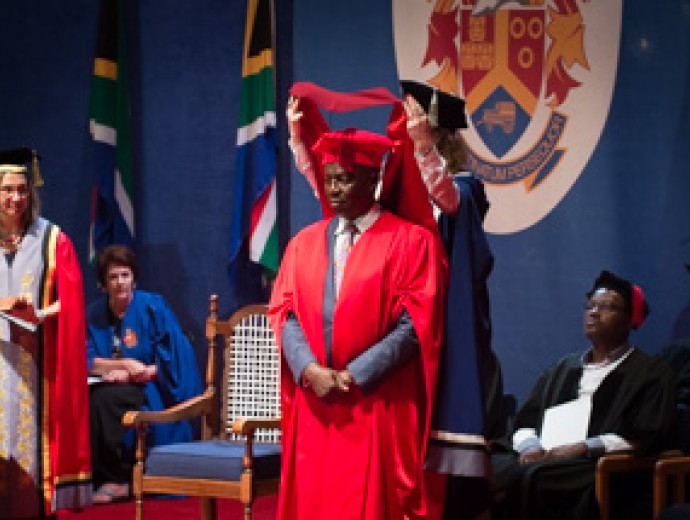