The US Ambassador’s Fund for Cultural Preservation (AFCP) has awarded the University of Pretoria a $57 000 (about R800 000) grant to preserve and grow its Mapungubwe Archive, making UP one of only two South African institutions to have received the grant twice from a global pot of funding, a rarity for the African continent.

“The Mapungubwe Archive is not simply a collection of historical documents and records – it is a veritable treasure trove,” said Prof Caroline Nicholson, UP Registrar and Chairperson of its Heritage Committee. “It is constantly growing; preserving the archive and growing it towards perfection is our mission.”

Accrued over 85 years, the extensive archive contains more than 20 000 cultural and historical records, and an incalculable amount of photographic material dating from 1933 – as a result of archaeological investigations at the 13th-century (AD 1220–AD 1290) Mapungubwe site – to present day. It falls under the stewardship of UP, and is the only depository in South Africa that identifies, collects and preserves records of archival value relating to the history of Mapungubwe, the excavated history of the Mapungubwe Collection, UP’s research role, and indirectly to Mapungubwe as a recognised National and World Heritage Site.

“Mapungubwe is characterised by its contested claims, racial history, land dispossession, apartheid, repatriation, post-apartheid claims, nationalisms, pan-Africanism and ethnicity, and exemplifies South African history in the broader context,” says Prof Nicholson. “It has fascinated the research community and politicians alike in South Africa since the 1930s and represents one of the longest, if not the longest, running research project in South Africa.”

The AFCP will provide for the preservation of a safe micro- and macro-environment for the repository. The fund will also refurbish the archive in the available space, provide proper archival housing for the records, grade storage materials, and conduct environmental monitoring to improve the physical care and preservation of historical records for as long as possible.

US Chargé d’ Affaires Ms Jessye Lapenn congratulated UP on being awarded the grant for a second time. The university was previously awarded a grant in 2013 for the preservation of the bone and ivory collection, which resulted in the Lerapo Exhibit. Chargé Lapenn said the donation showed a significant commitment from the US for preserving South African heritage to be available for learning, enjoying and studying in the future.

Heritage preservation is an integral component to the continuation of our knowledge about Mapungubwe and South Africa’s pre-colonial past as it can further scientific pursuits and make the archive more accessible beyond the confines of academia. 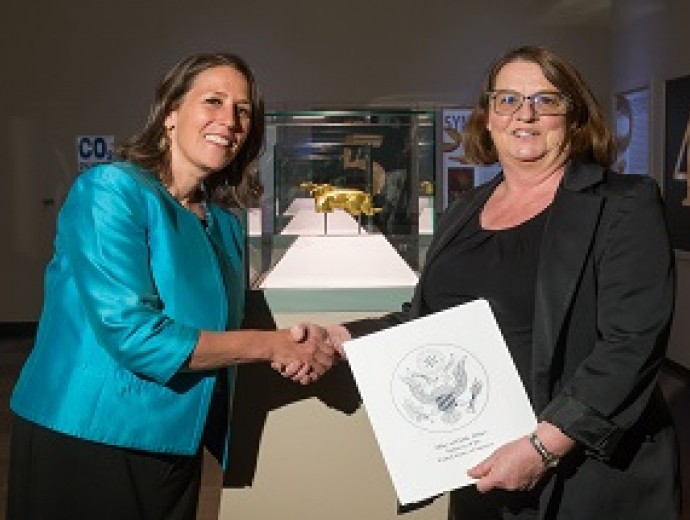