From 4-14 July over 16 000 singers from more than 350 choirs world-wide, will compete, share and exchange values and cultural practices through music at the 2018 World Choir Games Tshwane.

The Rautenbach Hall at the University of Pretoria (UP) is the hub for the gathering of the choirs, which will perform at various venues in the city, including the Aula Theatre and the Musaion.

Organised by German-based organisation, Interkultur, the world’s leading organiser of choral competitions and festivals, South Africa is the first country in Africa to host this biennial event. Celebrating its 10th anniversary this year, this competition takes place every two years on a different continent.

According to the Interkultuur website, the principles of the World Choir Games are based on the Olympic ideals, ‘which aim to peacefully unify people and nations connected by song in a fair competition. This idea is supposed to inspire people to experience the power of interaction by singing together. Unrelated to artistic levels, this approach challenges personality and team spirit likewise.’

Furthermore, the idea of the World Choir Games is based on the personal experience of ‘choir singers from all over the world who pick up and pass on human ideals through song. It contributes to people overcoming conflicts and setting, through their social interaction, an example for other people. Music is the common language of the world and serves as a link between cultures and nations.’

Choirs apply to compete instead of needing to qualify. Both accomplished and amateur choirs compete at the appropriate level in two separate competitions: the Champions Competition for choirs with international competitive experience; and the Open Competition, which allows choirs the opportunity to participate at the appropriate level. Both competitions have 27 categories and this includes Young Children’s Choirs, University and College Choirs, Jazz, Gospel, Pop Ensembles, and Pop Choirs.

Celebration Concerts will take place at the University of Pretoria’s Aula Theatre.

According to Dr Michael Barrett, conductor of UP Choir, Tuks Camerata, and a member of the Artistic Committee of the World Choir Games, ‘it is a huge honour to be involved in the World Choir Games, all thanks to Tuks Camerata doing so well internationally in choral competitions’. Tuks Camerata is the host choir and will perform in the opening ceremony (Wednesday, 4 July 2018) at 19:30 at the Sun Arena, in Menlyn. This will be broadcast live on KYKNET. It will also be part of the closing ceremony on 14 July 2018 at the Sun Arena at 19:30.

He said that ‘the Camerata will also be used as masters of ceremonies for all competitions and will perform in a celebration concert on Thursday, 5 July at 19:30 in the Aula. The Tuks Camerata was also honoured to be selected to record the brand new anthem of the World Choir Games – specially composed for the competition by the world-renowned John Rutter, called One Voice.’ Click here to watch the video.

Dr Barrett explained that as ‘international exposure is important to the University, this event is of massive importance. Since the hub of the event is the Rautenbach Hall, every single participant needs to come to campus. We are using the Aula and Musaion as competition venues.’

The World Choir Games will also offer workshops, seminars and open rehearsal sessions, whereby choirs, conductors, and individuals will be introduced to international choral literature, singing styles, and performance practices. Furthermore, new choral experiences will be created by mixing with other singers, getting instructions from the workshop leaders, while performing in this creative environment might open the eyes and ears of the choristers to new choral experiences.

Events at the Aula and Musaion are set out below:

For details on the programme, go to www.tshwane2018.org
Tickets may be purchased for individual events or full day passes at R200 for concerts, celebration concert tickets and some of the award ceremonies. Please book at  wcg.nutickets.co.za. 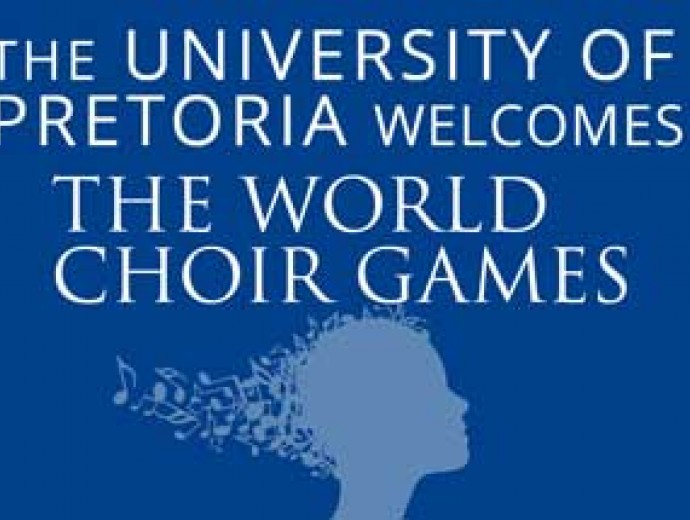