Celebrating a century of academic excellence

On 29 July 2017, as part of its centenary celebrations, the Faculty of Theology, in collaboration with UP Arts, held a concert and a banquet hosted by the Vice-Chancellor and Principal of the University of Pretoria (UP), Prof Cheryl de la Rey. Prof David Ford, Regius Professor of Divinity (Emeritus) at the University of Cambridge, was the honorary guest speaker.

As a further cause for celebration, the Faculty's academic excellence was recently confirmed by the QS World University Rankings by Subject, which placed Pretoria in 14th position in terms of research impact, and in 28th position in terms of citations per paper. This is the highest ranking in Africa and among the top one hundred in the world.

Prof Ford offered his congratulations and expressed his pleasure in taking part in these centenary celebrations during a year in which the beginning of the Reformation is also being remembered.

'The Reformed commitment and contribution to intellectual excellence, not just in theology but in all disciplines and areas of university life around the world, has been second to none. And my appreciation of that has been enhanced by learning how here, at the University of Pretoria, Reformed theology is now involved in shaping a setting that is hospitable to other Christian traditions, to other religions, and to the best secular understanding.'

Prof Johan Buitendag, Dean of the Faculty of Theology, noted at the banquet that a centenary is a time for gratitude, thanksgiving and, most importantly, for contemplation. As important as the past hundred years were, the emphasis of any centenary celebrations should be on the century ahead.

In his address, Prof Ford echoed this sentiment by focusing on the future of theology at public universities by answering the question: What might universities do to shape a better future in the twenty-first century?

'They can recognise that they have a threefold responsibility: to engage academically with religion and belief, to help improve public discourse and policy in relation to the religions, and to serve religious traditions through critical and constructive contributions to their understanding and practice, just as they do in other spheres such as business, health, politics, and sustaining the ecosystem. There is no reason whatsoever why religion should not be treated with the same academic seriousness as those spheres.'

To Prof Ford, the key to realising this, is wisdom. He noted that theology's overall responsibility in a public university – in a world where there is so much foolish faith, dangerous faith, ignorant faith, and utterly inadequate public understanding of faith – might be seen as working with others to foster wiser, more intelligent and more responsible faith and belief, and understanding thereof, all for the sake of the flourishing of a healthily plural world.

'On the occasion of this celebration, what I want to say is, simply: treasure what you have, realise how important a niche it is in the world's academic ecosystem, and continue to cultivate it, because it is vital for the sake of what you have taken as your watchword: life in its fullness,' Prof Ford said.

In conclusion, he prayed that, in the coming century, UP's Faculty of Theology may be a blessing to the University, to this wonderful country and continent, and to our gloriously diverse, plural, rainbow world. 'May you be willing, like Nelson Mandela, to move "dangerously out ahead", especially as you attend to both the pursuit of wisdom in each tradition you study, and to the urgent cries of fellow human beings and the rest of creation. Amen.'

View a photo galery of the concert and banquet 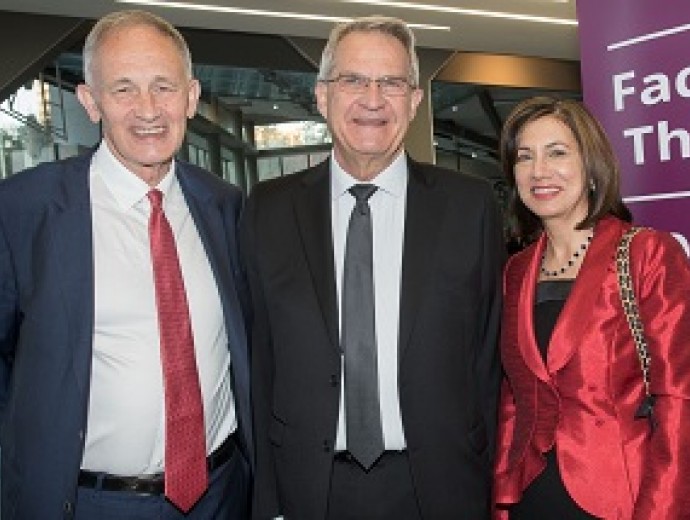 From left to right: Prof David Ford, Regius Professor of Divinity (Emeritus) at the University of Cambridge, Prof Johan Buitendag, Dean of the Faculty of Theology and Prof Cheryl de la Rey, Vice-Chancellor and Principal of UP