The Centre for Human Rights is proud to introduce Dr Romola Adeola, its youngest doctoral graduate.

At just 26 years of age, Romola has set a record in being the youngest person to obtain a Doctor of Laws degree (LLD) in the 30-year history of the Centre for Human Rights. Furthermore, she is the second youngest person to achieve this in the Faculty of Law, University of Pretoria since its establishment 107 years ago. She distinguished herself by completing the LLD in under 3 years.

This record is in keeping with a pattern of excellence which Romola has maintained since her undergraduate years at Lagos State University (LASU) where she was awarded the Taslim Olawale Elias Prize for the Best Student in International Law.

Her excellent record earned her admission to the Centre's doctoral programme in 2013. Her thesis, supervised by Prof Frans Viljoen was titled Development-induced displacement in Africa: Striking a balance between the imperative of development and the rights of persons likely to be displaced. In her thesis, Romola analyzed the obligation in article 10 of the African Union Convention in relation to the Protection and Assistance of Internally Displaced Persons in Africa. Her study, one of the first on this Convention, focused specifically on development-induced displacement which is one of the root causes of internal displacement in Africa.

As a young scholar, she has given interviews on television, presented papers at international conferences and been the voice of the Centre on issues of internally displaced persons, migrants and refugees. During her time here, Romola led the Disability Rights Clinic and served as Alumni Coordinator. In this latter capacity, she led a campaign calling for the release of prominent Swazi human rights activist - Thulani Maseko, and raised funding to support his family.

In addition to her stellar academic performance at the University of Pretoria, Romola also holds two diplomas from Åbo Akademi University in:

Romola attributes her success to her supportive parents, personal discipline, perseverance and prayer. In her words she said: be faithful to God, be true to yourself and be of service to humanity.

The Centre for Human Rights is extremely proud of Dr Adeola whose sharp and gentle, caring heart are now in full service to Africa and the world. 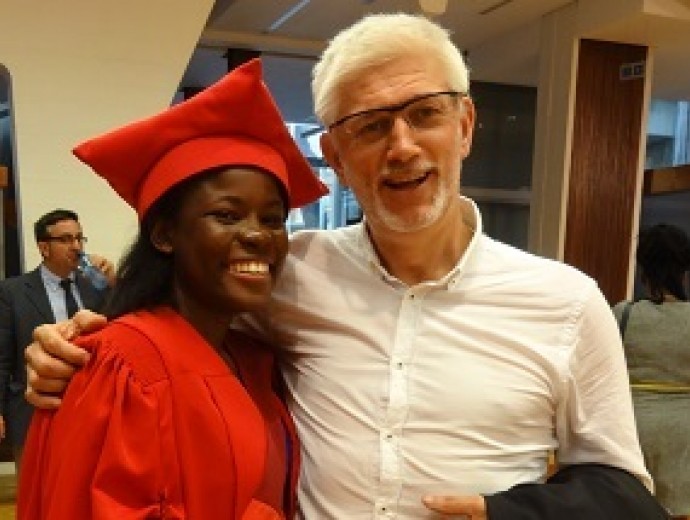