Searching for the dirty truth

Wildlife endocrinology is a very important research area as it provides valuable information about the regulating systems of reproductive functions and responses to stressors in animals. An understanding of these systems contributes to conservation efforts by providing insights into the influence of environmental factors on breeding rate or by supporting the development of assisted reproductive technologies.

Monitoring reproductive functions and responses to stressors in wildlife can, however, be challenging – especially when working with elusive and dangerous animals such as elephants, rhinos or tigers. The process of capturing wildlife to collect blood samples usually causes a stress response, making it difficult to determine natural cause-and-effect relationships. Furthermore, frequent blood sampling may be harmful, particularly to very small animals such as the African spiny mouse or the sengi.

Although hormones were predominantly measured in serum and plasma in the past, non-invasive methods have gained popularity over the past 30 years as a more practical approach for assessing ovarian, testicular and, more recently, adrenocortical activity in elusive wildlife species. Nowadays, the hormone matrices most commonly used include urine, faeces, saliva, feathers and hair.

The Endocrine Research Laboratory (ERL), in the Department of Anatomy and Physiology in the Faculty of Veterinary Science, has established numerous non-invasive tests for a wide range of species. Since it opened its doors in 2009, the ERL has been pioneering new techniques in Africa. The core work of the laboratory involves non-invasive endocrine monitoring of faecal samples from a wide variety of wild and domestic animals. The ERL is headed by the Section Head of Physiology, Prof André Ganswindt.

While non-invasive hormone measurement is a favoured choice among many endocrinologists, one has to keep in mind that hormone metabolism and excretion are highly species-specific processes. Since this specificity even applies to closely related species, tests must be validated for every new species studied. Prof Ganswindt explains that only certain types of hormone, or rather their metabolites, can be quantified. The ERL focusses on the quantification of steroids because other compounds, such as protein hormones, are completely degraded by the time defecation takes place.

The idea of working with faeces may not be a pleasant one for some, but the truth is that, logistically, it is the best hormone matrix that can be collected without disturbing the animal. Faeces can provide information about female and male reproductive status, as well as adrenocortical function as a measure of stress. For example, Prof Ganswindt’s team are able to determine pregnancy in white rhinos by comparing the levels of progestogens, and to examine the welfare implication of dehorning by monitoring glucocorticoid concentrations. ‘These approaches will contribute towards our efforts to help endangered species like the rhino,’ says Ganswindt.

Stress can be defined as a state of perturbed homeostasis that usually leads to a range of adaptive mechanisms aimed at protecting the affected individuals. During this biochemical process, signals from a region in the brain called the hypothalamus trigger the adrenal glands to secrete glucocorticoids, which are hormones that produce an array of effects in response to stress. This response can be caused by a perceived threat, disease or injury. Social stress can also be monitored, which can be useful in, for example, buffalo to ascertain the implications of the separation of an individual from its herd. While this process is the body’s natural way of protecting itself in times of danger or discomfort, Prof Ganswindt explains that prolonged periods of stress can have negative effects on the animal’s health.

While faecal hormone analysis provides valuable insights into the endocrinology of animals, it seems to be telling researchers a lot more than that. A previous study that established a method for monitoring stress in crocodiles is now serving as a proxy for determining water health across South Africa. Faecal samples from crocodiles are currently collected in pristine areas and in areas prone to pollution. A comparison of stress-related hormone levels in those crocodiles will provide critical information on the status of South African water and what it means for the health of our ecosystems.

Prof Ganswindt collaborates closely with a number of international researchers and readily shares his expertise with this research community. In 2010, he and some of his international colleagues founded the International Society of Wildlife Endocrinology (ISWE). Prof Ganswindt is the deputy chairperson of the Society and will also be a keynote speaker at the 2015 ISWE Conference in Berlin, Germany, later this year.

The connection facilitated by the ISWE between the ERL and the international research community has created great opportunities for researchers around the world. The ERL’s vast and continually growing collection of sample material will serve as a platform for those wanting to conduct further studies. This collection forms the basis of a database that is readily available to researchers involved in similar projects.

The work of the ERL enables collaboration across faculties, particularly with the Faculty of Natural and Agricultural Sciences’ Department of Zoology and Entomology. Prof Ganswindt also serves as a research associate at the National Zoological Gardens in Pretoria, where further collaborative projects, predominantly on birds, are being conducted. A satellite facility is located at the zoo, where studies on penguins and ground hornbills will commence towards the end of this year.

Ganswindt holds an NRF C1 rating. His work features regularly in a wide range of publications, both academic and commercial. 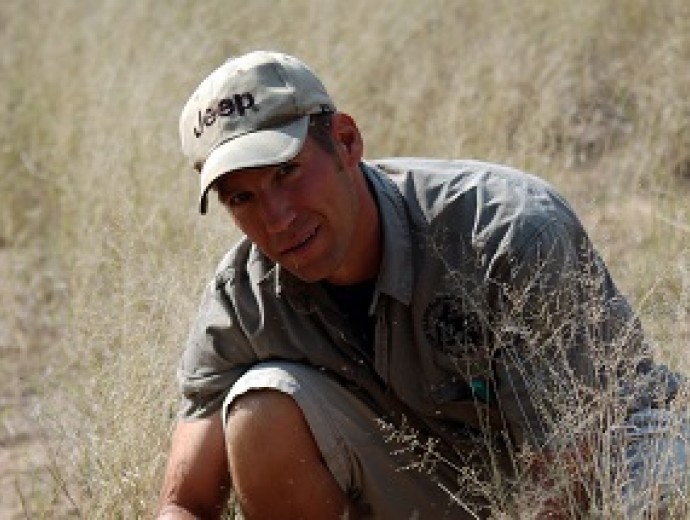