Prof Marco Dorigo studied the complex social behaviours of ants and applied them to computer science in order to solve difficult combinatorial optimisation problems. His so-called ant colony optimisation (ACO) algorithm is capable of solving computational problems by finding the shortest paths through graphs in the same way that ants, using only pheromones to navigate, can find the shortest path between their nest and a food source.

He described the conception of the algorithm thus: ‘I imagined a bunch of simple artificial agents imitating real ant behaviour to solve difficult mathematical problems. Although it sounded like a crazy idea then, today it is accepted even by professional theoretical computer scientists and software engineers.’

Prof Dorigo is Research Director of the FNRS, the Belgian National Fund for Scientific Research, and Co-Director of IRIDIA, the artificial intelligence laboratory of the Université Libre de Bruxelles. His current research interests include swarm intelligence, swarm robotics, and metaheuristics for discrete optimisation.

He is also a fellow of the IEEE (Institute of Electrical and Electronics Engineers), the AAAI (Association for the Advancement of Artificial Intelligence) and the ECCAI (European Coordinating Committee for Artificial Intelligence). Prof Dorigo has been awarded many international prizes in recognition of his scientific contributions.

Prof Dorigo encouraged computer science graduates to consider research and science as possible alternatives to a corporate career. He said that to be a successful researcher or scientist, one needs to be creative, self-confident and passionate about the work. ‘You need to be clever, as you need to understand what other very clever people have discovered before you. Creativity is also fundamental to the research process. If you are not creative you can be an excellent teacher, but not an excellent researcher,’ he said.

He encouraged graduates, in whatever job that they do, to make a difference in the lives of those who are less privileged. ‘Remember how privileged we are to be here. We belong to an elite group and, for the most part, this is not by our merit. We should therefore never forget that we are among the lucky ones and that we should be at the service of [those who are] less fortunate. Do not forget to spend part of your energy in trying to build a better world with fewer inequalities and less injustice,’ he concluded. 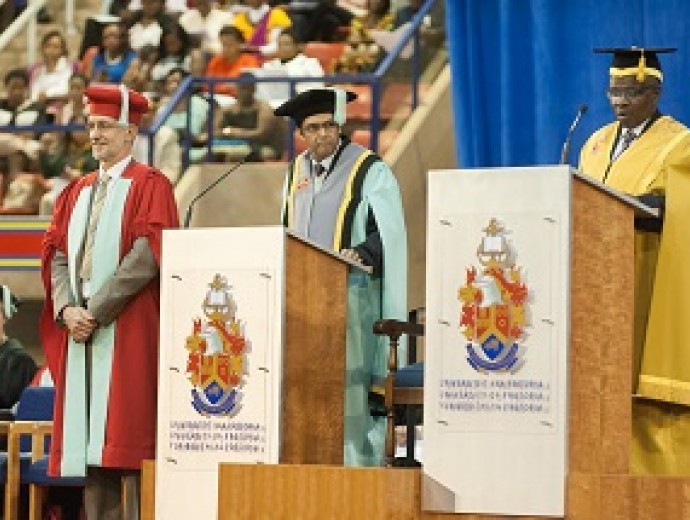 From left to right: Prof Marco Dorigo, Prof Sunil Maharaj (Dean of the Faculty of Engineering, Built Environment and IT), and Prof Wiseman Nkuhlu (Chancellor of the University of Pretoria)