Has the relationship between Namibia and Germany sunk to a new low?

Dealing with the consequences of the 1904-1908 genocide committed by German colonial troops in what was then called German Southwest Africa remains unfinished business. Negotiations between the governments of Namibia and Germany are entering their fifth year. The main topics include the wording and modalities of an official German apology, as well as the compensation to be paid.

Until mid-2015 German governments had simply denied the genocide. After acknowledging the historical realities, bilateral negotiations between the German and Namibian governments resumed at the end of 2015. So far no official results have been announced. Germany made the wording of an apology a subject of the negotiations, and claims reparations are a no-go on account of legal formalities.

Relations between Germany and Namibia have always been strained. This is mostly because Berlin today has taken on the mantle of the former West Germany. In marked contrast, the anticolonial struggle by the liberation movement SWAPO received considerable material and ideological support from the former East Germany.

Efforts to resolve this complex situation weren’t helped by Daniel Günther’s recent official visit to Namibia. He is the prime minister of the German federal state of Schleswig-Holstein and currently the president of the Federal Council. This makes him one of the five highest representatives of the German state. He was the first in this league to visit Namibia since President Roman Herzog visited the country over 20 years ago.

Günther has a reputation as a fairly liberal conservative, heading a federal government coalition with the Liberals and the Greens. He appeared to be a good choice for an encounter that it was hoped would strengthen parliamentary relations between the countries.

Günther paid his respects at a Swakopmund graveyard monument erected to commemorate the victims of the colonial concentration camp there. But he missed the opportunity to bend his knees. In 1970 West German chancellor Willy Brandt turned a history page with Poland through the Warsaw genuflection. In a spontaneous act of remorse Brandt went on his knees to honour those killed by the Nazi regime in the uprising of the Warsaw ghetto.

Germany praises itself for having declared a ‘special responsibility’ for Namibia since independence. It points to the highest per capita amount of development aid paid to Namibians.

But the relationship is viewed very differently from Windhoek, where Berlin’s attitude is perceived as patronising. It’s also seen as a way to deflect from the admission of historical guilt – and its consequences.

During his official encounters Günther’s statements were indicative of the German approach. The genocide issue, while important, was far from the only topic on the agenda. This was clear from the fact that he was accompanied by a large business delegation from Schleswig-Holstein.

In a meeting with President Hage Geingob, Günther expressed an interest “in finding a quick solution to the genocide issue”. The Head of State responded that there was no need to rush the negotiation process. Rather, issues should be handled properly.

Earlier in the negotiations the German side tried to push matters in ways that were considered undiplomatic by Namibia. For example, in July 2016 the German Special Envoy Ruprecht Polenz argued that there should be a speedy conclusion to discussions because of the general election due in Germany in 2017. The imposition of constraints stemming from German politics was not received well.

Günther’s foray may have reflected concern at slow progress. But it ignored the intricate subject matter as well as the unsolved contradictions. These include the German reluctance to accede to the terms of genocide and consequent reparations and the issue of legitimacy of the final outcome, since large parts of the victim communities insist on their claim for an autonomous role in the negotiations.

The prime minister of Schleswig-Holstein missed the opportunity to improve relations between the two countries in other ways too.

He dipped into the contentious – and unresolved – land debate in Namibia. Possible expropriation of land was raised at a national land conference recently. Günther chose to admonish the President about the necessity to respect property rights. Potential investors would not be forthcoming if property would not be protected.

This was viewed as wholly inappropriate. It showed ignorance of the nuanced debates in the country. These focus on the need to resolve the exorbitant inequalities in Namibian society which stem from colonial days. At the same time, the constitutional provisions to respect private property have never been in doubt.

He caused further offence during his address to the National Council. As the second chamber in Namibia, it is the institutional pendant to the German Federal Council, assembling elected councillors from the country’s 14 regions. This was Günther’s most official appearance during his stay.

He pointed out that 30 years ago East Germans in parallel to Namibians “forced the government to hold the first and only free elections”. He stated further:

“I believe that people in the GDR and people in Namibia clearly showed their courage in their struggle for liberation.”

Comparing the civil rights movement in the former German Democratic Republic with the anticolonial struggle under the liberation movement SWAPO was another sign of the German disconnect with Namibian realities. It is at best disrespectful to the human costs of two decades of war against an illegal regime and adds insult to injury. More than 40 000 Namibians fled into exile since the early 1960s, thousands were killed and the northern part of the country was under a curfew for almost two decades.

Günther has supplied one further instance of diplomatic insensitivity that marks the official German approach to the shared dire colonial past with Namibia. Instead of showing appropriate humility and listening, all too often, German officials lecture Africans on best practice and reveal ignorance of the basics regarding the real situation.

This article first appeared in The Conversation on 4 August 2019.­ 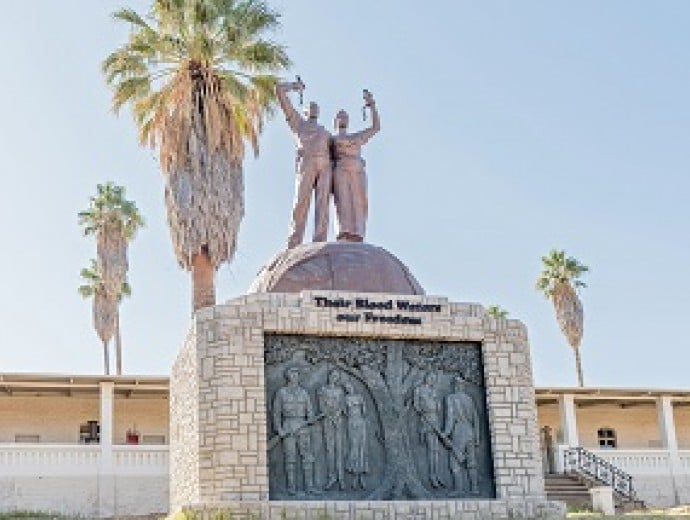 The Genocide Memorial in front of the Alte Feste in Windhoek reads: “Their Blood Waters Our Freedom”.