Conquering the world through academic excellence

Dickson Ajisafe has graduated with a Master’s in African and European Cultural Relations at the University of Pretoria’s Autumn Graduation Ceremony. He was also a recipient of the Erasmus Plus Scholarship to study in Europe in 2016.

This scholarship is funded by the European Union, and is exclusively awarded to students from European Union and non-European Union countries, through partnership agreements, on the basis of excellence.

The MA programme that he just completed, equipped its participants with skills to become professionals in multilateral and bilateral diplomatic relations in Africa and Europe; as well as prepares graduates as future mediators in various national and international organisations.

Ajisafe viewed winning the scholarship as an opportunity to add value to humanity. When he registered for the MA programme, he knew that he would need to spend some time in Europe to understand their culture and society better and also take African values to the European community. As a recipient of the scholarship, he had the opportunity to do so and this broadened his horizons in the process.

His thesis, titled ‘Radicalization of European Citizens and ISIS Terrorism’, looked into the growing numbers of terror attacks in Europe.

He explained that UP helped him to achieve his goals on an international front because it provides an environment conducive to excellent academic performance and skills development, which results in global relevance. ‘UP students are groomed for solving societal problems at local, national, international and intercontinental levels,’ he said.

His advice to students is to ‘be a visionary, set goals, be committed to your goals, gather relevant information that connects with your dreams, never give in to failure on your road to success, invest your time productively, build value-adding relationships, endure hardships and remember that tough times never last, but tough people do.’ He recalls a time when he lived on R50 a week and still managed to succeed and never give up on his studies. ‘Finally, give attention to your studies and value integrity,’ he concluded.

Ajisafe is now a PhD (Political Science) candidate in the Faculty of Humanities, specialising in International Relations. 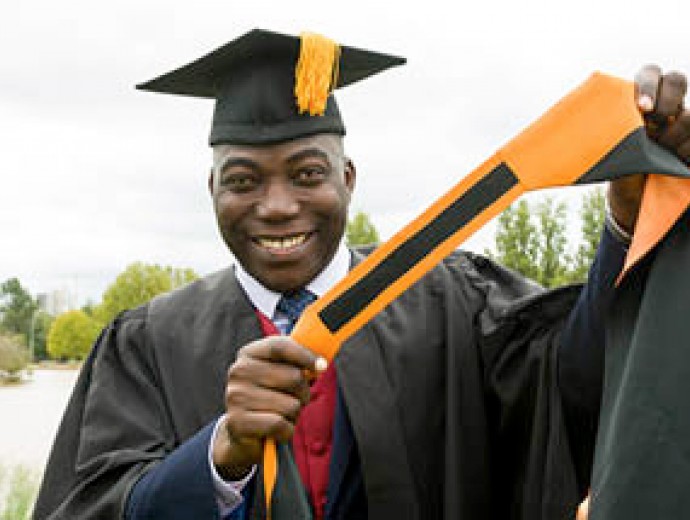