Avian influenza (AI) is an infectious viral respiratory disease that normally affects birds. However, due to the ability of the virus to mutate and its zoonotic pandemic potential, cases of human and other mammalian infections are becoming increasingly frequent. The effects of AI on local and global economies are huge and could become devastating. Research has found that most countries are not well prepared to cope with a possible avian influenza pandemic.

By using his understanding of how the virus gets into the food system, how it spreads and how it can be managed, Dr Folorunso Oludayo Fasina, an associate professor in the Faculty of Veterinary Science's Department of Veterinary Tropical Diseases, has developed a risk model to limit the spread of AI. Because poultry is a major food item in Africa, Dr Fasina created a model for foodborne contamination specific to this continent, on which infections have already been reported in 12 countries. He identified 378 sites in Egypt and Nigeria, which both have large numbers of live bird markets, household poultry producers and local butchers. Research sites also included commercial abattoirs and professional veterinary authorities, where the relevant persons were interviewed. All sites were analysed for their sensitivity to the overall risks of contamination and the spreading of the disease. Results indicated that live bird markets, poultry kept by households and local slaughtering practices offer prime conditions for the spreading of the virus, and it was found that the way in which poultry is produced, processed, transported and commercialised can be the first line of defence.

Dr Fasina's model makes it possible to do risk predictions and is intended to assist health policy makers in preventing future AI disasters. He also notes that education and awareness campaigns aimed at promoting behavioural changes are imperative to reduce the risk of foodborne infection.

AI in livestock and birds is transmitted mainly through the air or food, as well as via saliva, nasal secretions and faeces, and humans are at risk of contamination when they consume uncooked or partially cooked meat. This highly contagious disease spreads very rapidly among poultry and affected birds will die in a matter of days. Based on Dr Fasina's findings, it is strongly recommended that poultry and other livestock, such as pigs, should not be kept in close proximity in order to prevent cross-species contamination. Sites where both chickens and other livestock are kept are common, particularly in live animal markets and rural households.

Dr Fasina explains that each strain of the influenza virus shows a preference for specific receptors in the lungs of animals and humans. Pigs have receptors for all strains, which makes them susceptible to all forms of the disease, which may consequently easily spread it to other mammals, such as humans and horses, as well as to poultry.

Although researchers maintain that AI cannot be transmitted effectively between humans, 53% of all humans infected globally have died. Treatment for the virus is particularly restrictive because of the numerous subtypes of strains and the mutation rates. There are effectively 19 times 11 (209) types of influenza, which limits the efficacy of vaccinations.

Although this disease is extremely contagious and involves major health and economic risks, it can be managed if the correct practices are followed. While he was conducting research with a view to the development of the risk model, Dr Fasina was involved in cultural campaigns to bring about a better understanding of the disease and the need for cultural change. He recommends that the teams that treat AI in various areas should include not only veterinarians and researchers involved in the scientific study of the virus, but also social scientists who are trained to work with communities. The training of communities in hygienic slaughtering practices is absolutely essential to limiting the spread of the disease.

Dr Fasina's work also includes epidemiology research on avian influenza and an economic analysis of the disease to aid decision-making. The Faculty of Veterinary Science has a Biosafety Level 3 Laboratory, which is a high-grade containment facility where studies on AI and other viruses can be conducted without the risk of contaminating the environment. 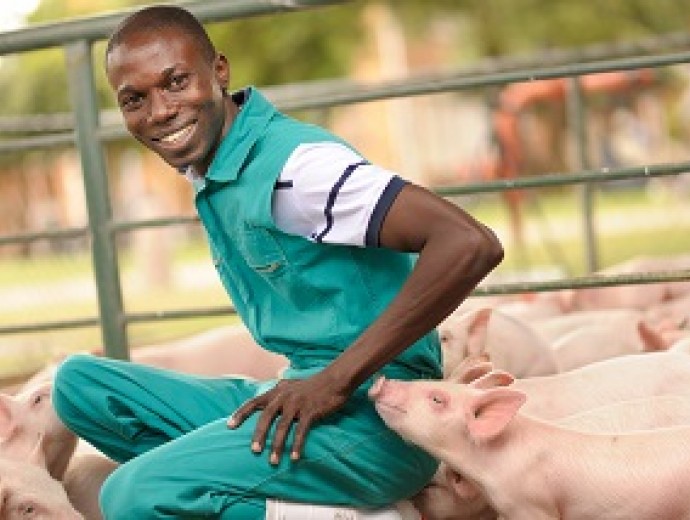