University of Pretoria (UP) BCom Honours Investment Management student Matifadza Bingudza, the undergraduate winner of the 2019 Nedbank and Old Mutual Budget Speech Competition, is “a symbol of the high-quality graduates” that the University produces, says Vice-Chancellor and Principal Professor Tawana Kupe.

Bingudza was one of four UP students who made it into the finals of the competition. No mean feat if you consider that only 20 finalists are chosen from entries from all universities across South Africa. The other undergraduate finalists were Michelle Hartzenberg and Wihan van der Heever. UP also had a finalist at postgraduate level, André Lourens.

The competition, which has undergraduate and postgraduate categories, exposes university students across South Africa to fiscal and economic policy planning processes. It calls on the country’s top young thinkers to find practical solutions to key social and economic challenges.

Bingudza, who entered the competition last year while she was completing her BCom Investment Management degree, said “The competition topic was ‘Make a case for and against investing in South Africa’. The premise of my essay focused on the fact that institutions (economic, social and political conventions) form the fundamental building blocks of any economy. Not only do institutions such as property rights and the rule of law hamper or foster economic growth, but they also directly influence the rate of return investors will derive.”

In her essay she argued that prospective investors will need to undertake a vigorous and careful analysis of the strength of institutions as well as broader economic factors within the South African context. This is to ultimately determine whether the country proves to be a viable investment destination. She spent much time on her essay before her submission to the University for her economics coursework. This was before the actual submission to the Budget Speech Competition.

She said she believes “the writing process should not be rushed. If you spread the process out over time, you’re able to allow yourself time to process what you’re working on and add new information. This is what allows you to refine your writing. I also consulted my lecturers to ensure I was on the right track.”

The initial essay submission was in June last year. Essays are submitted to a panel and the submission is anonymous to ensure objectivity. The announcement of the semi-finalists was in September, whereafter the finalists were announced in October. Bingudza was among 10 undergraduate finalists.

“We were flown to Cape Town on 24 February for the final interview with the adjudication panel. The winners were chosen after the interviews and announced at a gala dinner after the budget speech that was given by Finance Minister Tito Mboweni.”

She walked away with a R60 000 prize. “The entire experience has been surreal. Often during my time in Cape Town, I could not believe the generosity and commitment that Nedbank and Old Mutual have made to investing in young people and the value they place on providing a platform to share ideas and views with one another as well as industry experts.”

Finalists were provided with media training, interview and CV tips and opportunities to network with people in the field of economics.

She said her lecturers played an important role in her entering the competition. “We had to write an essay using the topic given by the Budget Speech Competition as part of our economics coursework. Our lecturers at the Department of Economics then encouraged us to enter the competition and provided guidance and tips on how to improve our essays.” She is grateful for assistance from Dr Sansia Blackmore, Dirk Scholtz and Professor Martin Breitenbach for their support during the competition.

Scholtz said he was incredibly proud of “the calibre and performance of our students at this year’s Budget Speech Competition”.

UP students conducted themselves professionally throughout the adjudication process in Cape Town, he said.

“Several adjudicators and organisers conveyed how impressed they were with the UP students’ performance. Ms Bingudza’s outstanding achievement in this nationwide competition reconfirmed the exceptional quality of education that students receive at UP.”

Bingudza was congratulated by UP Vice-Chancellor and Principal, Professor Tawana Kupe who said, “UP is proud of you. You are a symbol of the high-quality graduates that we produce.” 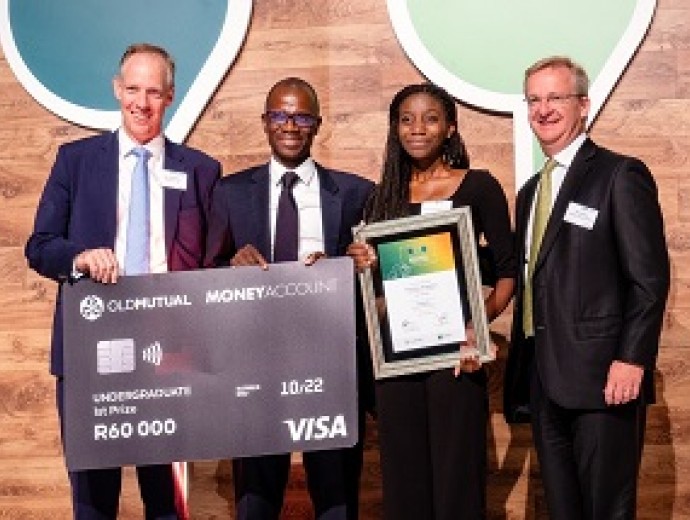