The hundreds of thousands of bare circular patches in the arid grasslands in the Namib Desert, commonly referred to as fairy circles, have puzzled the scientific community for decades. The fairy circles are mostly confined to a narrow strip, about 50 to 100 km inland from the Atlantic Ocean, which stretches down from southwestern Angola, through Namibia to north-western South Africa. However, a new study revealed that they even occur in South Africa, in the Kalahari Desert.

Prof Marion Meyer from the Department of Plant and Soil Sciences commenced in 2015 with a multidisciplinary study on the effect of toxic Euphorbia species (milk bushes) on fairy circle soil chemistry and water hydraulics, their germination inhibition and antimicrobial activity on rhizosphere bacteria, along with three BSc Hons students. The researchers also wanted to determine if these Euphorbia plants could give rise to the current spatial characteristics (pattern) of fairy circles and therefore compared their current spatial patterning with those of fairy circles in four areas of Namibia. These studies eventually led to the completion of master’s degrees for three students: JW Hurter, Nicole Galt and Christiaan Schutte (also supervised by Prof Greg Breetzke of the Department of Geography, Geoinformatics and Meteorology).

The results of these studies were recently published in BMC Ecology, a Springer Nature journal (click here for a link to the paper). This multidisciplinary study provides soil chemical, phytochemical and GIS spatial patterning evidence that fairy circles of Namibia are caused by dead Euphorbia species. The researchers propose that the Euphorbia spp. colonised sandy plains when climatic conditions were more favourable in the past. Since sandy soils have low water-holding capacity and might facilitate the formation of a hydraulically connected landscape, these plants would have been under pressure for water and nutrient availability. When climatic conditions became less favourable, the lack of water and competition for nutrients would have resulted in increased competition between these plants and many would have died. The temperature increase in Namibia during the last two or three decades is roughly three times more than the global mean temperature increase reported for the 20th century. Several other authors showed that drastic temperature increases and drier conditions were present in southern Africa on a number of occasions during the last few centuries.

It is further proposed that the decomposition of dead plants and the sticky latex altered the chemical properties of the sand, which manifested in the hydrophobicity of fairy circle soil. Various other compounds also entered the soil from the decaying euphorbias, some of which posed phytotoxic or allelopathic (the inhibition of growth by substances released by another plant) and antimicrobial activity. Most of these compounds would probably have broken down in a relatively short time, but the milky latex can adhere to the sand, become hard and can persist in soil for a long time. These changes to the soil cause the formation of many fairy circles and the transition proceeds from a site with only plants, to a mixed site with plants and fairy circles, and then a fairy circles-only site. This then results in a regular spatial pattern.

It has been observed that seeds do germinate inside fairy circles and seedlings emerge after a good rainfall, but survive only for short periods after rain. As the harsh desert conditions set in, it is proposed that the seedlings in the fairy circles die due to the soil water that infiltrates to depths beyond the reach of the roots of seedlings. In time, decades or even centuries, with the occasional rain, the effect left in the soil by euphorbias will slowly erode away, seedlings will survive for longer periods in the older fairy circles until they are eventually fully established and reach maturity, and the fairy circle will no longer be visible.

GC-MS soil analyses were done at the ITMO St Petersburg University in Russia, with the help of Prof Denis Baranenko, and revealed that soil from fairy circles and from under decomposing E. damarana plants are very similar in phytochemistry. Several compounds previously identified with antimicrobial and phytotoxic activity were also identified in E. gummifera.

And finally, by integrating rainfall, altitude and landcover in a GIS-based site suitability model, the researchers predicted where fairy circles should occur. The model largely agreed with the distribution of three Euphorbia species and resulted in the new discovery of fairy circles in the far southeast of Namibia and even in the Kalahari Desert of South Africa. Historical aerial imagery also showed that in a population of 406 E. gummifera plants in southern Namibia, 134 were replaced by fairy circles over a 50-year period.

This study provided supporting evidence that the Euphorbia theory can explain the formation of fairy circles at specific sites across Namibia, where these succulents co-occur with fairy circles. It was concluded that the allelopathic, adhesive, hydrophobic and toxic latex of E. damarana, E. gummifera, and possibly other species like E. gregaria, is the cause of the fairy circles. Further research in areas with many fairy circles where big populations of the large succulent euphorbias are currently not present, like in the Namib Rand Nature Reserve and Marienfluss, is in progress and focuses on DNA analyses of soil and ancient samples of plant pollen.

The fieldwork in the Namibian Desert was always interesting and even exciting, with occasions where desert lions, cheetah, elephants, snakes, etc. were encountered. The other co-authors who were involved in the strenuous fieldwork were Petunia Degashu, who is doing her PhD on this project, and Nicole Meyer, Prof Meyer's wife, who is also a botanist.

Some of the media coverage on this interesting research:
Africa’s fairy circle mystery is solved _ World _ The Times 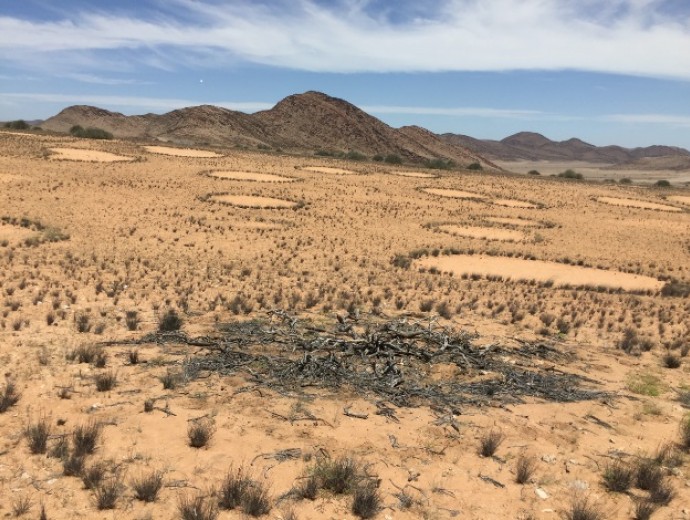