To receive a tiger as patient in the Faculty's Onderstepoort Veterinary Academic Hospital (OVAH) these days may not be that unusual anymore, but every time that happens one cannot escape the lasting impression such a magnificent and majestic beast has left. Prof Katja Koeppel (right) has a first look at Fushan

This time it was Fushan, a nine-year old male Siberian tiger from Cheetah Experience in Bela-Bela in the Limpopo Province. Fushan was born in South Africa and donated to Cheetah Experience (at that time they were still located in Bloemfontein) when he was around five months old because of an existing hip problem. He was always likely to need medical intervention at some stage in future and the centre – home to a number of endangered and threatened species - always accepted animals with special needs.
When Fushan arrived at his new home at that young age, he already limped but ran around and played happily. Previous examinations led to the centre being told that it was believed he had hip dysplasia and they had to wait until he was fully grown to be evaluated. They were advised to monitor him and give him calcium supplements.
As he became older the limp became more pronounced and in 2017 the centre had set up their own veterinary practice in Bloemfontein. They were able to sedate and examine him after which their veterinarian, Dr Sandra Bertram diagnosed serious osteoarthritis in the left hip, likely caused by trauma as a young animal. The acetabulum (or socket of the hip bone) also showed damage and had an abnormal shape while the left hip was unable to extend more than a few centimetres.
The tiger was prescribed pain medication and supplements and had access to a swimming pool to offer some therapeutic value. Over the next few years his behaviour was closely monitored and his medication and supplements were adjusted, particularly in instances when the weather got particularly cold or he had over-exerted himself which clearly had an influence on his mobility.
In February 2021 Fushan was relocated to Cheetah Experience’s new property in Bela-Bela. His new enclosure is 7500 m2 and he has a swimming pool that is 3m x 5m x 1.5m deep, lots of trees, bushes and rocks. Fushan was always active in Bloemfontein and he enjoyed walking along the fence line with volunteers and staff. In Bela Bela he does the same. On good days he stalks, runs and jumps around.
Fast forward to early July 2021 when Fushan was brought to the Onderstepoort Veterinary Academic Hospital (OVAH) to get some dental work done as well as to assess his hips. Our veterinary experts, among others, Prof Katja Koeppel, veterinary wildlife specialist, Prof Gerhard Steenkamp, specialist veterinary dental surgeon, and wildlife veterinarians Dr Jennie Hewlett and Dr Annette Roug were on hand to perform comprehensive examinations and treat the beautiful animal. Particular examinations on his hips were aimed at determining if there was any degeneration of the joints and to find out if there was something more that could be done for him. As more or less expected, there was some deterioration of his left hip/joint but Cheetah Experience will be able to continue managing his condition with medication, and assess him regularly. His current supplements will also be reviewed and alternatives will be recommended if needed.
Staff at Cheetah Experience have always also wondered why Fushan does not chew on things and an examination by Prof Steenkamp revealed chipping on some canines which has developed over time. For this, Prof Steenkamp performed root canal procedures on three of Fushan’s canines. He will review the dental work in six months’ time unless there is earlier evidence of problems.
- Author CvB
Share this page
Published by Chris van Blerk 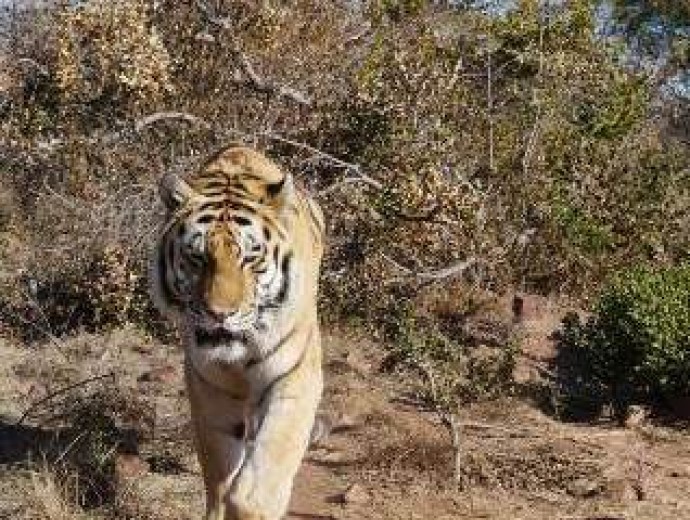