The Faculty's new wildlife clinic that was officially opened today by the Vice-Chancellor and Principal of the University of Pretoria, Prof Tawana Kupe already housed a few interesting patients but recently the facility had a very unusual visitor. Badgie, a beautiful honey badger, more commonly known as a ratel, was brought in by the Moholoholo Wildlife Rehabilitation Centre & Sanctuary (Moholoholo Rehab Centre) in Hoedspruit.

The Centre had a few concerns about Badgie's health and our competent team of wildlife vets immediately took action by running a few blood tests, looking for behavioral changes and observing his eating habits. They also did a CT-scan and an ultrasound scan. Although Badgie is used to his caretakers from Moholoholo, he was handled with extreme care at the wildlife clinic because honey badgers are known to be fearless creatures which, in the wild, can stand its ground against much bigger animals.

He was not a happy chappy after he woke up from anesthetics but all's well that ends well. After he spent two nights in the clinic, our vets gave him a clean bill of health and he was discharged from the clinic this morning, very happy to go home in Hoedspruit with his caretakers. The new wildlife facility which is part of the Onderstepoort Veterinary Academic Hospital (OVAH) will be officially opened on 6 March 2020. 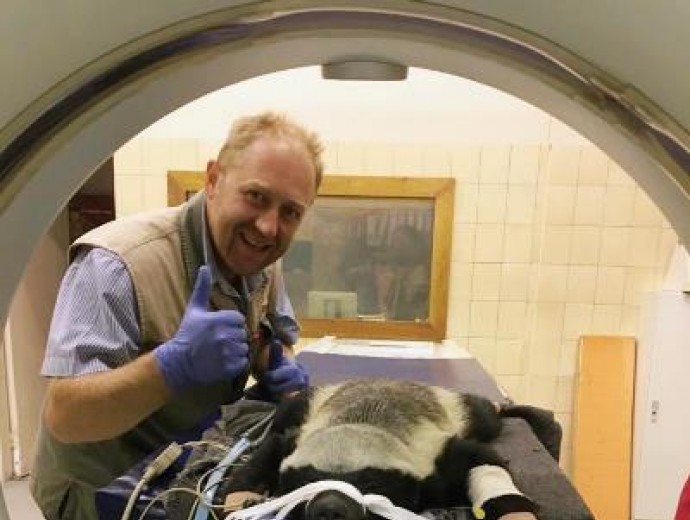 Dr Jacques O'Dell, one of the Faculty's wildlife veterinarians with Badgie before he underwent a CT-scan